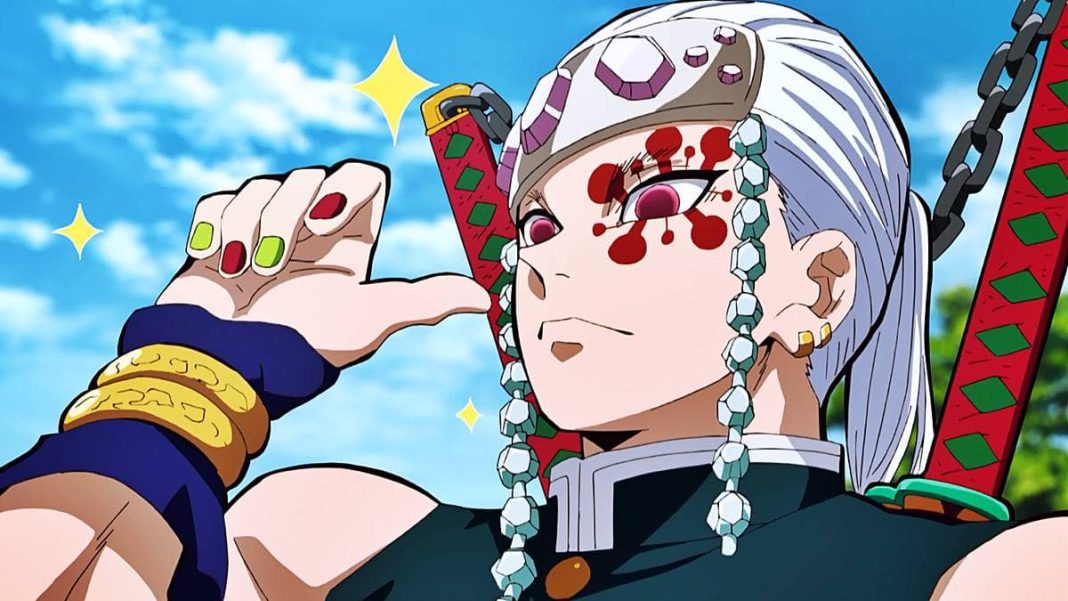 Uzui Tengen: Hello guys, this blog is about sound hashira Uzui Tengen. He is a male character from the Anime series Demon slayer. Uzui Tengen made his Manga debut In chapter 44 and Anime debut in Episode 21.  He is basically one of the Nine Hashiras present in today’s World.

As of physical appearance He is a tall man about 195cm and age 23. His hair color is white. He comes from shinobi background. He is a major supporting character in the Entertainment District arc. Uzui Tengen is a Demon slayer from the demon slayer corps. He has maroon eyes.

when he served for Demon slayers corps. He wears sleeveless and dark clothing. He basically wears a Demon slayer uniform with half-tucked pants and a pair of sandals. Uzui Tengen wears two thick golden rings around his upper arms. He also wars a headband that covers his head with lights in it. He also has eye makeup around his left eye. And small dots that run in his eyes.

He was born into a family of nine children in a shinobi clan. His father made them fight with each other in order to survive. They didn’t know each other while fighting as their faces were covered. Only two were able to make it out from fights. They did harsh training to get in shinobi. He loved his brother and left the village so that he didn’t have to kill his brother.

his family did the practice of polygamy. They have more than just 1 wives. He also has three wives. he wanted to terminate the Uzui clan. He could not do it. After his clan was left by him. He joined the Demon Slayer corps. And joined them. He climbed the ranks and become a sound hashira.

Though he is a shinobi who always believed in completing the mission whatever it takes to. But after he saw its dangerous effects he valued the family members ahead of the mission. He now wants that anyone in his clan under his command must look after their families and value their lives.

He always believed in making others feel scared of him. He is basically a family man. But he has self-esteem issues and deep regret under his outgoing front. He also compared himself to other Hashiras during battle with Gyutaro. He is a very eccentric person. Uzui Tengen started his rude behavior with Tanjiro kamado and also got excited about the thought if How good it will be if Tanjiro’s blood vessels would explode. He has a caring side only for his three wives Makio, Suma, Hinatsuru. Later he accepted Tanjiro and helped him in his mission.

He is a very powerful and highly trained swordsman Uzui Tengen is sound hashira so uses sounds techniques He faughseamlessly with Upper moon six Rank.

A. Hearing abilities – He has unmatched sound hearing abilities. He can easily hear deep sounds.  When in a fight he was able to easily locate underground tunnels using his sound detection techniques. He also guessed the number of persons inside.

B.  Strength and speed – He has great physical strength as compared to others. He can handle his sword very well.  He is very fats he cut off Daki head without notifying. Zenitsu, Inosuke, and Tanjiro helped him.

C. Stamina and Resistance – As a shinobi he has high resistance toward any poison attack after even being poisoned by Gyutaro he managed to fight. From childhood, he has been training very harsh and very rough He developed pain resistance due to this. He ignored the pain in many battles.

Like his personality he also Carries a pair of sets of weaponry He wields two Nichirin Blades amber in colour. They are held by metal chains. His chains have explosive power. and no one before Upper moon six has been managed to cut through his attacks. His sword has ” destroy demons written on it.”

sound breathing he carries this style since he is a sound hashira He has mastered hearing abilities. He uses various forms to use first form “roar” in which he creates a massive explosion using his swords, fourth form”Constant Resounding slashes” in which he rotattes using swords and creates a massive explosion. And the fifth form is”string Performance”.

A. He was originally a shinobi before he was Demon slayer and then become hashira.

B. He is the only one who was able to defeat death and only hashira who retired and didn’t die during a battle.

C. He ranks 37 in the first popularity poll and 13 in the second.

D. He is one with Inosuke to use two Nichirin Blades.