Ninja is not just always rely on technique and force them to fight the enemy, or to sneak into the enemy fortress, but also rely on their secret weapon that can be used when pressed. Not least the world of ninja Naruto (Manga and anime), which also has a lot of legendary weapons are dangerous, both for the opposition and for the heroes of the village of Konoha. Here are 10 of the most dangerous weapons in Naruto. 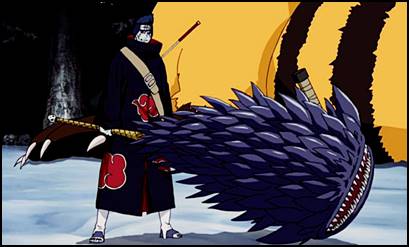 Samehada is one of seven legendary sword that is certainly one of the most dangerous weapons in the ninja world of Naruto. Samehada itself means sharkskin own uniqueness that is like a living creature. Samehada will injure anyone who can use it in addition to their owners by generating a sharp thorn thorns all over his body. In addition Samehada also called chakra has the ability to take that Samehada is also able to cut the chakra threads though. Samehada owned by Kisame seized from Fuguki. 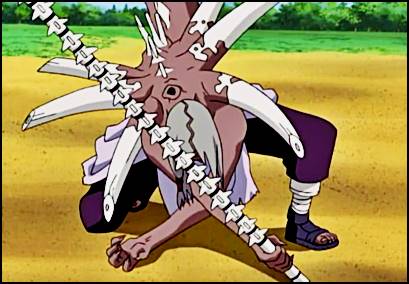 Spine whip is only owned by one person namely Kimimaro. Kimimaro appeared to fight Rock Lee that overwhelmed then assisted by Gaara. Clan Kimimaro does have the ability to manipulate the amount of bone in their body so that Kimimaro can be freely used bones bones as weapons. Whips Kimimaro spine has become one of the most dangerous weapons in the ninja world of Naruto with the sharpness and speed brought by Kimimaro. 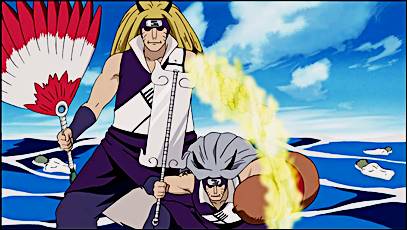 Kōkinjō rope is a weapon derived from the Sage of Six Path mode which is actually a pair with a sword called ?? Shichiseiken. “Tali Kōkinjō characterized blazing colors such as gold and dangerous because the ability is able to reach an enemy far distance. But unfortunately, this Kōkinjō rope users must have a large amount of chakra. But still Tali Kokonjo the most dangerous weapon in the world of ninja Naruto.