Home ANIME 10 Most Depressing Moment of Death In Naruto

Sacrifices are sometimes necessary to achieve the objectives to be achieved, and sometimes sacrifice was done not only for yourself but for your family, friends, friends and country. In the story of the comic and anime Naruto, many found some deaths protagonist provide valuable lessons for the fans so it is no wonder many were moved to tears at the stories of the death of the character. Here are 10 most depressing moment of death in the anime Naruto and an important moment in the story that is worth the trip Naruto.

Haku is a figure of a child because of his strength trying killed by his own father and village residents. Because trying to protect himself, he was forced to kill all villagers and ending denial in all the villages visited. At the time of loneliness that appears Haku Zabuza who saw the talent and invited her to adventure together, Haku gladly accepted.

Although only assume Haku Zabuza as a living weapon, Haku still put their heart and trust in Zabuza who have called keberadaaanya. Although in the end Haku was killed while trying to protect Zabuza, Haku Zabuza still regarded only as a weapon, but when Zabuza already doomed she approached and said hopefully Haku body will meet in the next life. 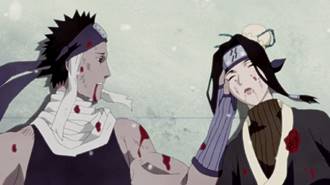 Hiruzen Sarutobi or better known as the Third Hokage Sandaime or is one of the most powerful ninja in Konoha. Since the death of Yondaime (Hokage Fourth), Sandaime took over his duties and return to being the leader of the village of Konoha.

However unfortunate, despite the ninja world has entered a period of peace, still trying attacked Konoha to be destroyed so Sandaime strive to continue to protect it with his life. The most tragic is when I learned that the brain behind the plot the destruction of Konoha was one of his own, namely Orochimaru. Sorry for making Orochimaru to be like that, Hiruzen open the seal forbidden jutsu to seal Orochimaru’s life at the expense of his own life. 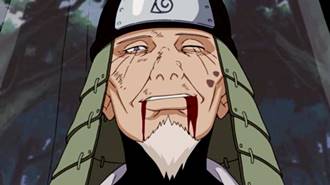