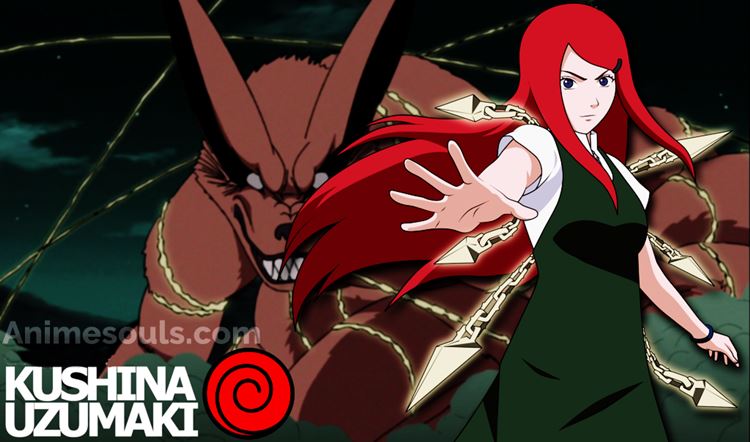 1 ⇒ Kushina’s name was possibly inspired by the mythological Kushinada hime, Susanoo’s wife. When she was about to be devoured by the serpent Yamata no Orochi, Kushinada hime was saved by Susanoo in exchange for becoming Susanoo wife. Susanoo transformed the girl into a comb and placed her in his hair, then defeated the serpent. He afterwards built a palace in Izumo where he married her.

2 ⇒ Her husband’s surname, Namikaze (waves and wind), could also be a reference to this myth, as Susanoo was the god of the sea and storms.

3 ⇒ As Kushina Uzumaki was nicknamed after a red pepper, and Minato Namikaze was famed as the ‘Yellow Flash’, Naruto Uzumaki’s appropriate self styled title of ‘Orange Hokage’ refers to the fact that the colour orange is a mixture of both yellow and red.

5 ⇒ Kushina Uzumaki is one of only six jinchuriki known to not die from tailed beast extraction, along with Black Zetsu, Otsutsuki Hagoromo, Killer B, Obito and her son Naruto. This was due to her clans vitality to which she inherited.

6 ⇒ Kushina Uzumaki mentions that her hairs became her own red thread of fate. also referred to as the (red thread of destiny), red thread of fate, and the other variants, is an East Asian belief originating from the Japanese legend and is also used in Chinese legend. According to this myth, the gods tie an invisible red string around the ankles of men and women who are destined to be soul mates and will one day marry each other. Often, in the Japanese culture, it is thought to be tied around the little finger. The two people connected by the red thread are destined lovers, regardless of time, place or circumstances. This magical rope may stretch or tangle, but never break. This myth is similar to the Western concept of soul mates or a twin flame.

7 ⇒ In the Naruto Uzumaki character popularity polls, Kushina Uzumaki was ranked as the 21st most popular character in the 7th.

8 ⇒ Kushina Uzumaki And Minato When first introduced in the anime, her eyes were depicted as the violet blue in colour and her hairs was portrayed as a deep plum colour. This was corrected in subsequent episodes. However, in Naruto Shippuden Ultimate Ninja Storm Generations, both her 1 and 2 appearances were shown in Naruto Uzumaki’s and Minato Namikaze’s stories respectively.

9 ⇒ The shinobi outfit Kushina wore in the anime is the same one her counterpart used in the Genjutsu World.

10 ⇒ Studio Pierrot’s Settei sheets of Kushina Uzumaki show that she was 145 cm when Minato Namikaze saved her from Kumogakure.