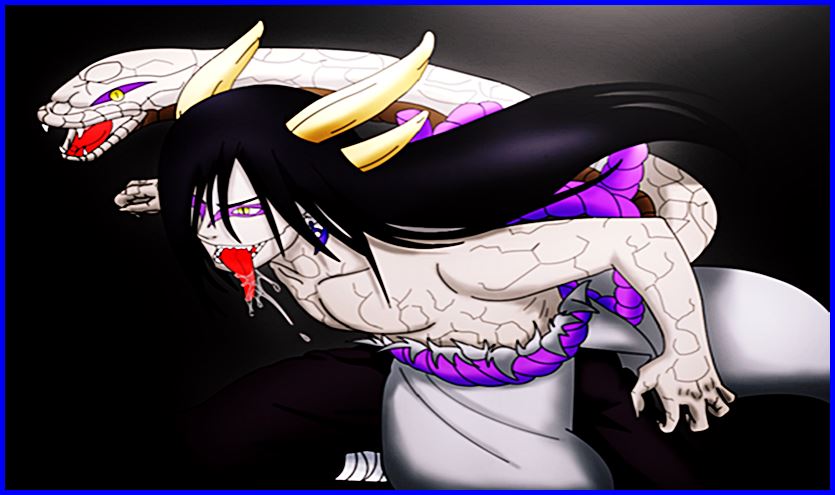 2. It is possible that Orochimaru has a Surname (last name) since both of Orochimaru’s parents’ names are written with 2 words. However, reading them is impossible due to kanji’s bad quality.

3. The Orochimaru borrows heavily from Japanese literature and myth.

4. Literature Orochimaru’s name, as well as those of Tsunade and Jiraiya, come from the ‘The Tale of the Gallant Jiraiya’ (Jiraiya Goketsu Monogatari). Orochimaru in that story was originally a student of Jiraiya’s called Yashagoro until he was corrupted by the snake magic and took on the name Orochimaru.

Who found the Kusanagi Sword

5. Myth Yamata no Orochi (Eight forked Giant Snake), a giant eight tailed, eight headed snake killed with the Totsuka Blade by the god Susanoo no Mikoto, who found the Kusanagi Sword in one of its tails This mirrors almost exactly how Itachi using Totsuka Sword wielding Susanoo sealed the Orochimaru, while in his Yamata form, and wielding the Kusanagi Sword kept inside of him.

6. In the English VIZ translation of chapter 49, Orochimaru introduces himself to Sasuke as ‘Orochimaru, the Giant Snake’. This was not present in the original version.

7. The symbolism of Orochimaru’s snake affiliation can be also tie to how many cultures, Western and Eastern, perceive snakes as symbols of rebirth and immortality via the shedding of their skin.

8. Orochimaru shares his blood type with his former teammates, Tsunade and Jiraiya.

9. After the preliminaries conclude, he is never shown again wearing an Otogakure forehead protector.

10. Studio Pierrot’s Settei sheets of Orochimaru show that he was 153cm when he was part of Hiruzen’s genin team, and as an adult, he is always 179.5cm even after taking bodies, even though the databook puts him as 179.4cm.

12. Orochimaru wishes to fight those with techniques that can be use in the future.

13. Orochimaru’s favorite food is eggs and his least favorite is anything cold.

16. In the fourth databook, kekkei Genkai is not list among Orochimaru’s special characteristics, despite his body granting him Wood Release.

17. He is the only one of the Sannin to have had children.

18. In Naruto Shippuden the Movie Bonds, Orochimaru claimed that Shinno had taught him many Reincarnation Ninjutsu.