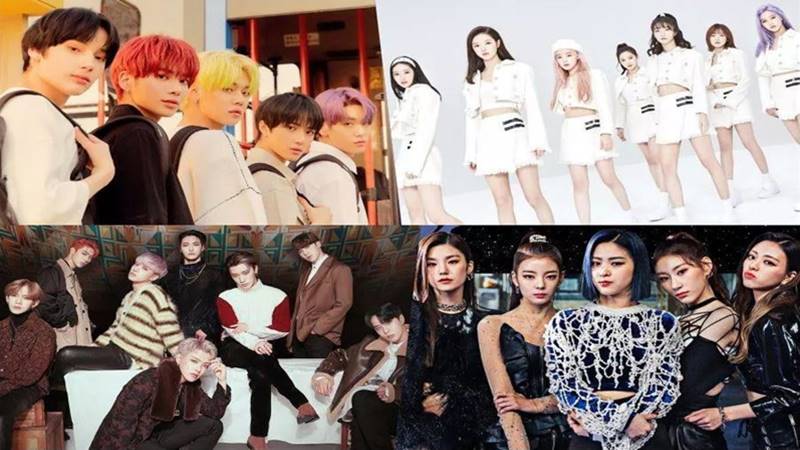 5 Best K-pop Groups: K-pop, sometimes referred to as Korean popular music, has taken the world by storm. Since its emergence in the middle of the 1990s, this musical subgenre has spawned a number of well-known bands, propelling it to the top of contemporary culture. You’ve probably heard of some of the most well-known K-pop artists, like SEVENTEEN, BTS, and Blackpink. The most infectious, well-liked bops of the previous couple of decades have been created by groups like those mentioned above and those on the list below. While welcoming Western musical influences including hip-hop, electronic dance, and R&B, their work incorporates traditional Korean sounds. With their motivating and uplifting music, these K-pop groups have won over a sizable fan base

and captured audiences over the years. Before they perform for the first time on stage, band members, sometimes referred to as idols, put in a huge effort and undergo rigorous vocal, media, and choreography training. They perform in groups of four to 21 performers. While the bands continue to release music as a group or occasionally celebrate individual endeavors,

K-pop stars frequently branch out into acting, fashion, and other creative fields, and their accomplishments are recognised on a worldwide level. Here are the top 5 K-pop bands if you want to start listening to K-pop but aren’t sure where to start. We’re confident that before you know it, you’ll be adding their albums to your playlists.

Korean popular music is referred to by the abbreviation K-pop. This musical style is a product of South Korean culture and has its roots there. In inclusion to its roots in traditional Korean music, it is also influenced by other forms and groups from around the world, including pop, experimental, rock, jazz, gospel, hip hop, R&B, reggae, folk, country, and classical music. Becoming recognised throughout the world as a Korean pop group and are gradually divided into several groups.

BTS is a group of 7 members of South Korean boy band that was once known as the Bangtan Boys. Since their 2013 debut, they have seen great popularity. BTS has achieved chart-topping success with four No. 1 albums and five straight No. 1 singles. The group also made history in 2017 when it became the first South Korean band to play at the AMA and the first Asian act to win Artist of the Year. With an estimated net worth of $100 million for the seven-member group and an average net worth of $20 million for each idol, the group as a whole.

The release of new BTS music, however, might take some time. The BTS band revealed that they are going on a “break” during their yearly FESTA event in a video posted to YouTube. The group is still together, a BTS spokeswoman affirmed, although they “will take time to pursue specific individual ventures at this point and remain active in various different forms,” the spokesperson added.

In the world of K-pop, the NCT introduced an intriguing idea. Presently, there are 21 members of NCT, or Neo Culture Technology. The entire world is traversed by this group, which is divided into several little units. In April 2016, the first group unit was however introduced. It originally only had Mark and Jaehyun as its two members, then later, they added an additional 7. They have an NCT 127 as their second subunit. Added components of this brand are NCT Dream and WayV. In contrast, the NCT127 is based in Seoul, and the Subunit WayV is based in China.

They released two albums: NCT 2020 Resonance Pt. 1 and Pt. 2, which together sold more than 2.6 million copies in less than two months, and NCT 2021 Empathy, which was published in two parts. At the Asia Artist Awards 2020, this group won their first Grand Daesang Award. This group is currently one of the most well-known K-pop groups worldwide.

When it comes to the top 10 K-pop acts in 2022, Monsta X is able to hold down the fifth position. This renowned South Korean K-pop trio was founded in 2014 and has since been well-known for its dynamic style, a fantastic mashup of EDM, hip hop, and pop. On May 14, 2015, the song “Trespass,” which was their first official release, was played. The music was created by the well-known South Korean rapper and producer Rhymer. Monsta X’s distinctive and diverse personality was portrayed in this song.

The appeal of this organization draws in individuals of all ages. Their debut studio album, The Clan, earns them a spot on Billboard’s US World Albums list. Monsta X currently only consists of six people, however it formerly had seven. On October 31, 2019, one of the group’s members, Wonho, departed the group due to a dispute. Six albums, three of which are in Korean, two in Japanese, and one in English, have already been released by them.

The Sixteen competition survival show included the founding of Twice. In October 2015, they made available their debut EP, The Story Begins. The K-pop group with the most-watched debut music video is “Like Ooh-Ahh,” which had 50 million views on YouTube. Following the release of their follow-up records, they launched their first concert in 2017 and gained more success. Twice became the female group with the lots of music videos to achieve 100 million views when their “Breakthrough” video, which debuted in May 2021, received 100 million views. Twice released Taste of Love one month later, surpassing Fifth Harmony’s previous mark for the greatest EP debut week for a girl group.

As the most well-known and accomplished K-pop groups of all time, TVXQ! is well-known. The group, which started out as a quintet, was created in 2003. The group won the Golden Disk Award for album of the year after releasing O-Jung.Ban.Hap in 2006 and Mirotic in 2008. These albums were two of their best-selling albums. Members left the organization in 2010 as a result of internal strife. The follow-up albums Tone and Time were released in 2011 and 2013 by the remaining members of TVXQ! Yunho and Changmin after a one-year break. They made history in Japan in 2018 when they became the first foreign performer to host a tour that attracted a million visitors. With their 2013 show Time tour, they additionally celebrated having the most popular and profitable K-pop concert in Japan.

Thanks for reading this K-pop blog.