Home ANIME THE 5 KAGES OF THE NEXT GENERATION 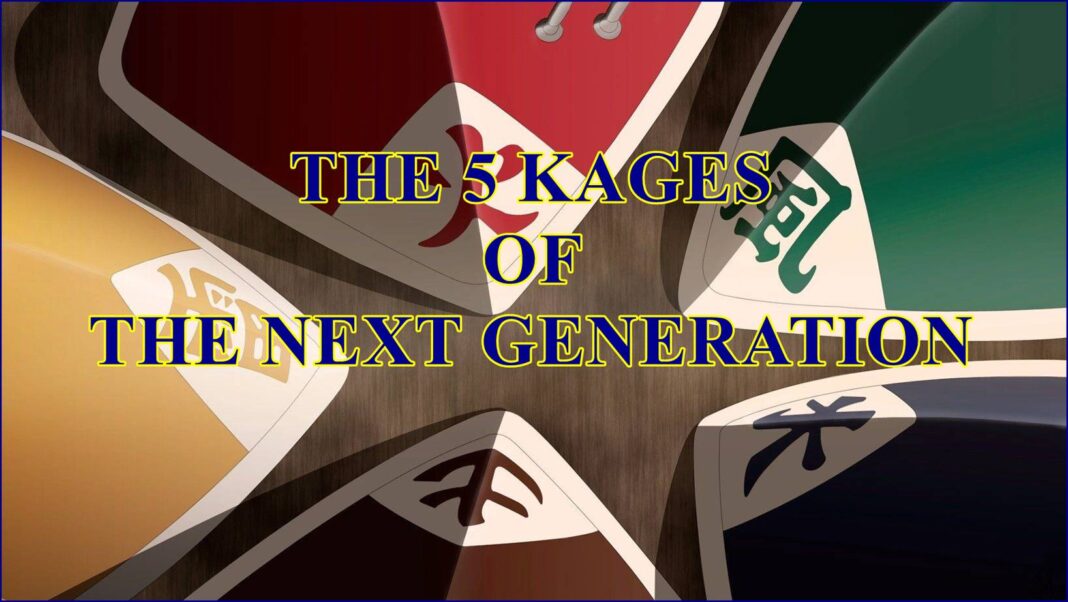 THE 5 KAGES OF THE NEXT GENERATION those listed below have either been directly chosen.

THE 5 KAGES OF THE NEXT GENERATION: As future Kage candidates or simply displayed a strong desire to become Kages

of their respective villages. Let’s look at them specifically.

As Sarada is the only child of Sasuke Uchiha and Sakura Haruno.

It is her sole goal is to become the Hokage in the future. So She made this

her ambition after seeing firsthand the kind of lives both her father, Sasuke and the 7th Hokage, Naruto live.

similarly, She prefers Naruto’s job of protecting and taking care of the village

which he sees as his family rather than that of her father,

who is seldom at home but is always on missions outside the village.

however, Sarada’s leadership qualities make her well suited for the Hokage position

as she is very observant, perceptive, calm, and collected.

She has so far done her best to reach this goal by mastering the Chidori That,

who in the past, inherited it from Kakashi.

In Fact, She has Lightning, fire, wind, and earth nature affinities.

She has also evolved her Sharingan to three tomoe and has the super strength of her mother, Sakura Too.

She’s also in line to be the first Uchiha Hokage after her grandfather Fugaku and Madara both failed to be Hokage.

AS Kagura is the grandson of Yagura, the 4th Mizukage, and the infamous Tyrannical leader of the
Hidden Mist village.

and regarded as Chojuro’s successor. He’s hailed as a prodigy and genius While still at the Academy meanwhile, he was able to wield the Hiramekei with ease

and even instilled fear in his peers after slaughtering his classmates in a sword dueling contest.

But Shizuma would use this incident to gain an advantage over him years later.

Together with Boruto, he was able to defeat Shizuma who wielded Samehada Alaso.

Aside from his prodigious proficiency with the sword, Kagura is friendly, calm, hospitable, and intelligent.

Even He’s sure to be a great Mizukage in the future.

in the same way, Shinki is the adopted son of Gaara and the heir apparent to

the position of Kazekage. In fact What makes Shinki extremely powerful isn’t just

on the other hand, He’s also a puppeteer after learning some skills from his uncle Kankuro.

In The Series, Sekki was raised by his elderly grandmother until her

like massaging her back As well. goals because He cares very much for his village and family,

BY showing great admiration for the Third Tsuchikage and dreams of inheriting the role himself one day truly.

actually, His greatest desire is to make his late grandmother proud.

additionally, Sekki specializes in taijutsu, using what he calls the “Ultimate Genbu Techniques”.

Apparently having at least 108 techniques, In fact his signature attack is a strong direct punch

that has a lot of force behind it, That able to smash through boulders and launch back large foes,

though he struggles to actually land his attacks. able to levitate multiple boulders,

And albeit the effort exhausts him quickly.

In fact From his time with his grandmother, Sekki became very skilled in massaging,

And able to treat the elderly Third Tsuchikage of his chronic backache.

In short, He’s no doubt going to be a great Tsuchikage in the future.

Next, I chose Yurui because he was the most powerful of the Genin

candidates from Kumo and was quite arrogant Also.

because He thought little of other candidates and considered them to be below Kumo ninjas.

As Quite typical of Raikage. He also admires killer B. So Yurui is described as an elite shinobi and a mastermind

who gives off a slovenly impression to throw his enemies off guard.

By Using the bubblegum As he’s constantly chewing In fact,

that are capable of trapping an enemy inside or causing explosions.

Due to carrying two Supervibrato Lightning Release Swords on his back,

So it can be assumed that he is skilled in kenjutsu. In short,

There’s debate as to whether he’d be the Raikage or the Jinchuriki of Gyuki.