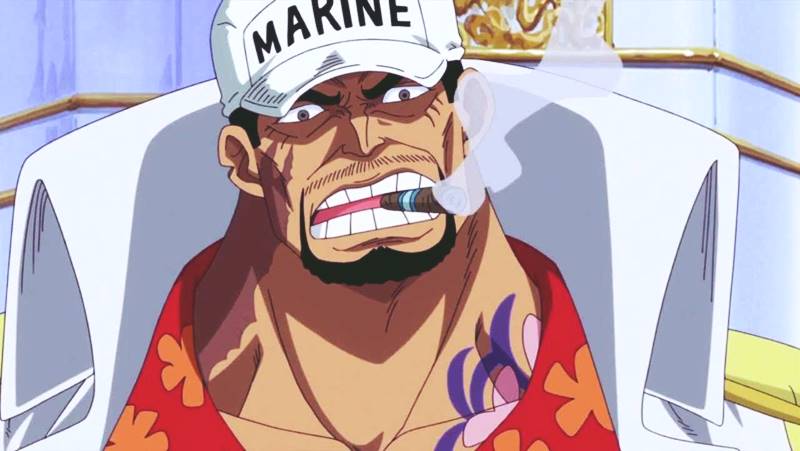 Akainu: One Piece includes a diverse cast of characters. There’s no doubting that no other manga series has a cast as diverse as this one. There are still a lot of characters in the series that we haven’t met yet. Fans have a difficult time choosing their favorite characters due to a large number of characters.

When it comes to Akainu, though, things are a little different. Many fans can easily back up their assertion that Akainu is one of the most loathed characters in the series. Akainu has done some several things, and in this piece, we’ll go over all of them.

Luffy had defeated Doflamingo in Dressrosa when this happened. The harsh Shichibukai’s reign came to an end, and everyone in Dressrosa cheered. Fujitora’s responsibility as a Marine was to apprehend Luffy, but he failed to do so. Fujitora couldn’t really do anything because the inhabitants of Dressrosa were protecting him. We all know Akainu’s personality, therefore no explanations were acceptable. So, until he apprehended Luffy, Akainu barred Fujitora from coming to the Navy HQ.

2. Is a chasing Pirate

Akainu is a devout devotee of ‘Absolute Justice,’ and he is unlikely to spare any pirate’s life. Akainu would be a hero in real life, but he is a major antagonist in One Piece. The Whitebeard Pirates fled after Whitebeard’s death, per their captain’s last wish. Akainu, on the other hand, had a different idea. He pursued and attacked the pirates. There had been a lot of deaths, and Akainu was eager to add to the tally.

Akainu is one of the Navy’s best fighters, and he was the strongest of the three Admirals at the time of his introduction. No one can deny Akainu’s strength, although he was distracted by the Whitebeard Pirates during the Summit War. It was apparent after Whitebeard’s death that the Navy had the upper hand. The Whitebeard Pirates retreated in order to honor their captain’s final desire. Akainu, on the other hand, was still pursuing them. He proceeded to taunt them, oblivious to the fact that Sengoku and his companions were now facing a greater threat. Akainu didn’t appear to notice or care that Blackbeard and company were giving them a hard time.

Akainu appeared indestructible at times, and he is now one of the series’ most powerful characters, but he was washed out when he faced Whitebeard. When Whitebeard became infuriated, he destroyed Akainu and made him regret killing Ace right away. Akainu tried to fight back, but it was in vain. The strength of Whitebeard was simply too much. When Akainu realized he couldn’t defeat Whitebeard, he went underground and waited for Whitebeard to die.

Luffy traveled to Marineford in order to save his brother from the Marines’ execution. Ace had been given to the Marines by Blackbeard in exchange for a Shichibukai rank. Luffy and his companions arrived at Marineford to save Ace. He was successful in rescuing Ace, but Ace gave his life in order to save Luffy. It is, without a doubt, One Piece’s most poignant sequence. Luffy had a mental collapse after witnessing Ace’s death in before of his eyes, and he was unable to think rationally. He decided to assassinate Luffy when he was being dragged away. He manages to hit Luffy, leaving him with a large scar over his chest.

The only person who could rival Roger in his peak was Whitebeard. Pirates and Marines alike acknowledged this. Roger’s former sailor, Buggy, admitted as much. Whitebeard was well-liked by all. His team referred to him as ‘pops,’ and he referred to them as his sons.’ Not only had Akainu duped Squard, but he had also insulted Whitebeard countless times. Ace was not having it when He mocked Whitebeard in front of him. He returned to Akainu and attacked him. Many people believe Ace was crazy to assault Akainu, yet he had every right to do so when his father was mistreated.

Attacking pirates and murdering them is one thing, but attacking your fellow countrymen is something only a despicable person would do. As we all know, Akainu is a believer in ‘Absolute Justice,’ and he is eager to execute anyone who dares to stand in his path. This was demonstrated at Marineford when Akainu attacked non-fighting Marines. He also went after Coby, who was devastate by a large number of casualties. When Coby requeste that the war be halte, He simply attacks him. Coby would have died if it hadn’t been for Shanks.

Every One Piece fan who despises He realizes that killing Ace was his most heinous deed. Ace was one of the most popular pirates and one of the nicest. He was about to be execute by Marines, but thanks to Luffy’s and his friends’ united efforts, he was rescue. When Ace insulted Whitebeard, he got into a fight with Akainu. Ace deflected Akainu’s assault, which would have killed his younger brother.

This is without a doubt Akainu’s most heinous act. When Ohara was annihilate by a Buster Call, he was a vice-admiral. A ship carrying Ohara civilians was about to leave the island when He opened fire on it. He slaughtered all of the ship’s passengers, who were all innocent. As a Marine, who is suppose to defend civilians rather than murder them, this is completely terrible.