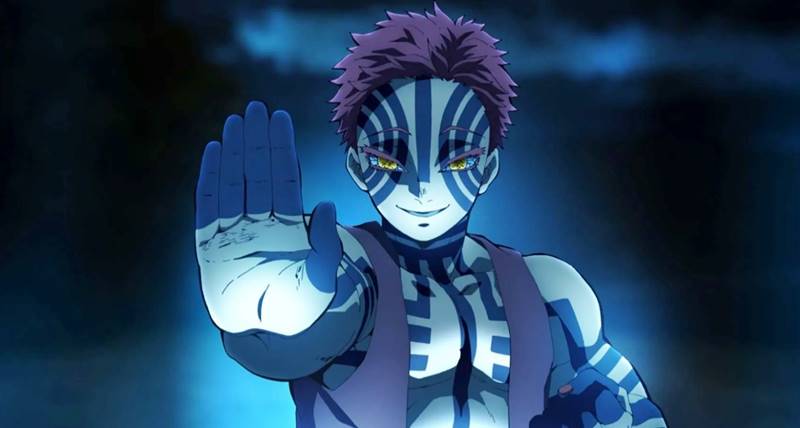 10 facts about Akaza the demon from Demon slayer

Akaza: Hello, friends hope you are doing well. You all have read about Demons slayer but Demons slayers are nothing if there are no demons. So talking about demons, this blog is about one of the demons named Akaza, upper moon 3. We haven’t seen him in season first but we saw him Fighting Rengoku in the Movie Demon slayer” Mugen train“. He is upper-level Demon who got his powers directly from Muzan. Like every other Demon, he was once a human too but circumstances made him to turn himself into a demon. He is one of the strongest demon and kills humans for fun. So here are some facts about him.

As a human, he was a strong man with eyes very bright and he was a good person who always helped people. After becoming a demon, his skin turned fair and bright. He has thick blue lines which are shown as a tattoo in human form. His hairs are pink after turning into a demon. He has marking on his all body as a sign of the harsh things he has been through. Akaza wore short dark purple haori and wears sports baggy white pants. He just said that he is a simple person who likes to fight with strong person.

As seen from the story, as a human he was a good man who always cared for his father. He also earned money so that he can keep his father alive. He is s strong person who likes to fight. Akaza is stubborn as seen from his past life history. He wants to become stronger and stronger. Akaza is ready to fight anyone who challenges him. He was a trained thief who pickpocketed people to earn money and help his father to recover from his health condition.

3. Akaza Always up for a fight

As seen from the past story, he was always a strong person. He hated those whom he find weak. He likes to play with them and make them beg for their lives. As such incidents are that when he was a human too. He killed many humans because he thought they were too weak to survive in this cruel world without demons’ blood. Though he kills them, he doesn’t kill any woman as his past life experiences have taught him.

His human name was Hakuji. He has seen the harshest life may be. When he was a kid his mother passed away, his father always remained sick, and to make his health again, he pickpocketed. Once he was caught and given a cruel punishment, Hearing about this incident his father decided to end his life. He was again left alone until he find a kind person named Keizo who helped Akaza and took him to take care of Keizo’s sick daughter. They later decided to marry her father’s wish but once he was out for some work, her father’s rival killed them, and again Hakuji was alone. He then murders all to take revenge but he was sad and doesn’t want to continue his life until muzan met him.

In a fight with Kyujoru Rengoku in the “Mugen Train arc,” he said that he killed many hashira. He said that he doesn’t even count how many hashiras he has killed who tried to kill Akaza. He also says that he finds it fascinating to kill strong hashers who came to kill him. Demon slayer corps sent many fighters but no one returned alive. During the fight, if he finds someone stronger than him, he offers them to turn them into a demon so that they can become more powerful. But everyone refused. He was left confused as to why these people still wanted to be Human.

7. Kind person as a human

As a human form, he was a very kind and generous person. He was very affectionate towards his father who mostly remained sick. Akaza wanted to make him healthy but didn’t as he was very poor and regretted that he couldn’t save his life. He was a stubborn person but also had a big heart and was full of kindness. He valued another person’s life and always keep pity on his life which is so miserable.  Even after becoming a demon, he doesn’t kill women as he has some past memories of Hakuji. Sometimes he regrets the actions done by him when he remembers his human life.

From a kind-hearted person as a human to a blood-thirsty demon, many things change but his rage and will to kill people didn’t change. He doesn’t think anything when he is angry. When his father died he killed many people until he was controlled by Keizo and trained him to control his anger and also made him marry his daughter kiyuki. But Keizo rivals also killed both Keizo and his daughter Kiyuki when Hakuji wasn’t there. When he reached home and found them dead. He went mad and killed over 60 people In the rage with his bare hands only. This news caught the attention of Muzan who offered Hakuji to turn him into a demon. Hakuji was shattered and accepted the offer thinking that he has no one to live for. Muzan destroyed his memory of humanity and turned him into a pure demon.

Akaza always encountered bad luck both in human and demon form. His mother and father died. His master and the girl whom he was going to marry also died. He was torchered from childhood and always think to end his life. As demon form, though he killed many humans he still ranked 3 in the Moon, after Doma and Kokushibo. He hated them and always wanted to take first place. He lashed out at Doma when they meet and also wanted to kill Kokushibo. Thus he strongly hated them. He wanted to be acknowledged by Muzan and become the number one Moon.

As a demon, he has an unending amount of power and strength. We have already seen how powerful he is when he defeated Kyojuro and many other hashiras in the past as he says. He is the Fourth standing demon overall in the series. He almost defeated both Giyu and Tanjiro in a fight. Akaza might be more powerful if he ate women which hindered his growth as a demon. He has extraordinary perception and fighting spirit. He has immense regeneration capabilities along with speed which makes him undefeatable. Moreover, his will to fight is something that cant be met by anyone. He likes hand-to-hand fighting he doesn’t use any weapon. Some of his techniques are Compass needle, Air type attack, Disorders, Annihilation type, etc. He was Muzan’s favorite being a loyal and punctual demon. His attack is named after fireworks. Also, he passes time by working out.