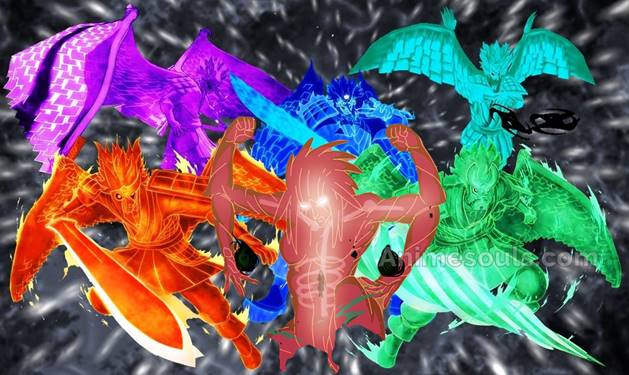 All Susanoo: All 8 Susanoo Perfect Forms With Sarada Uchiha

All Susanoo is a gigantic humanoid being made of the user’s CHAKRA that surrounds them and fights on their own behalf. It is the strongest ability available to those who have awaken the Mangekyo Sharingan {MS} in both eyes.

Susanoo is quite effective as a Strong defense, it is able to discriminate in what it blocks. Susanoo is Made by Different between users, in terms of color, weaponry, and design.

they also have two sets of arms one of which can form wings as part of its Complete Body form and six fingers on each of hands. All Susanoo have wield at least one sword.

Indra’s Susanoo’S is purple in color. In its Complete Body form And Indra Otsutsuki Use His Susanoo’S against His Brother Ashura Otsutsuki For Hagoromo Otsutsuki selected Asura as his successor to carry out his dream of peace and Love understanding in the world.

Uchiha Madara Susanoo is blue in colour. His Susanoo is made up of two entirely different sides that are conjoint along their spine, both of which have distinct faces its Complete Body form,

its head gains a long tengu nose and 2 lines running down from its mouth to his chin area, as well as hair which is tied up at the sides.

back faces has similarly elongated canine teeth in his upper jaw bracket and a single horn protruding from its forehead. In its armor form, the usual tengu like armor splits from his forehead down,

revealing Susanoo eye’s while obscuring the rest of his face. In its Complete Body form, the sword’s more closely resemble like traditional katana,

complete with a sheath held in the secondary arm’s. These swords can cut through mountains across great distances For long-range attacks, Uchiha Madara can use Susanoo to perform Yasaka Magatama.

Uchiha Shisui Susanoo Is Not Show In Anime But It’s Come In Ultimate Ninja Storm Revolution Uchiha Shisui can use a green Susanoo.

even After Donzo stole his right eye. It has a blade-like appendage on its shoulders, the side of its face, and along its forearms. Its right arm wields like a drill like a lance that Uchiha Shisui

can coat with Fire to create’s a vortex of flames. It is also able to unleash a barrage of Chakra Needles. In Game Uchiha Shisui performed With only one eye.

Itachi Uchiha Susanoo possesses a curved blade that resembles a Tanto or dagger. He rarely uses this, preferring his Sword of Totsuka Blade wielded in its primary right hand

and sheath in a sake jar hold by its second right hand. The Sword of Totsuka Blade is an ethereal weapon with an enchant blade that, in addition to standard cutting,

and Seal Him in the simultaneous use of the Sword of Totsuka Blade and the Yata Mirror and made Itachi essentially invincible. For long-range attacks, Itachi Uchiha can use Susanoo’s to perform Yasaka Magatama.

Uchiha Sasuke Susanoo was initially depicted as a dark shade of blue in the Anime Show’s it is purple in all other media. Because Uchiha Sasuke’s development has often been marking by intense feelings of hatred,

his Susanoo’s is noted to be much darker in composition compared to Uchiha Itachi. In its Complete Body form, Uchiha Sasuke Susanoo’s has a helmet that feature a long tengu nose, two spikes over each eye,

a slit stretching across His mouth, three gaps on each of its cheeks, and one additional gap on his chin. Because of his Rinnegan Susanoo to blocked out the light of the Infinite Tsukuyomi.

Hatake Kakashi Susanoo’s is yellow in the manga The Susanoo’s he uses has only been seen in a Complete Body form. It had a characteristic tengu nose,

a Forehead Protector like plating on His head, two locks of hair falling on either side of his face, a hole in his chin, and a vertical mark extending across its left eye,