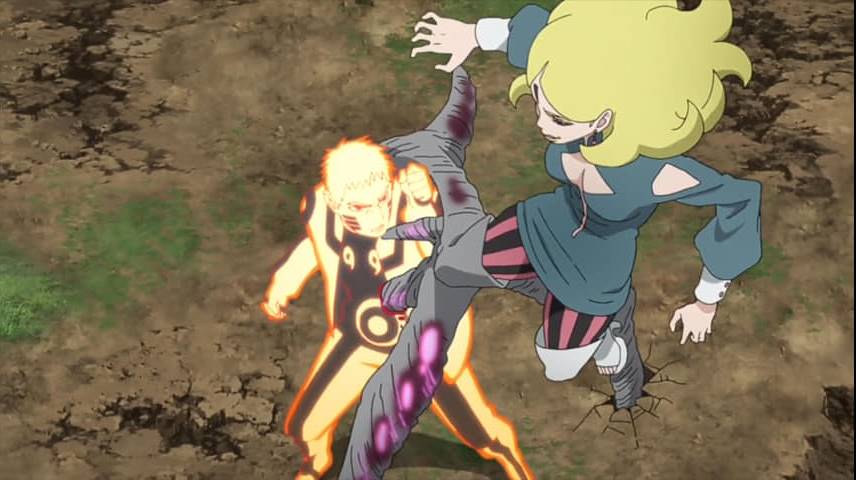 focused only on the battle between Naruto and Delta however.

Well, on the one hand to the opinions of many others on this episode,

as i believe this episode wasn’t bad at all. actually i have had enough time to rewatch it several times

what exactly transpired in the Manga as well. Let’s look at what happened further.

WHAT THIS EPISODE WAS ALL ABOUT

While many are quick to pick out the animation failings and battle sequence errors of this episode,

but i was able to perceive something different. Unlike Super awesome episodes 65 & 189

although, this episode wasn’t entirely an ‘all out-battle centered’ episode.

protecting his family who was watching nearby too. In short To put it simply,

was in the Manga, the fact remains that she bit way more than she could chew against Naruto.

Never mind Naruto’s statement about “going all out” and “getting serious” at all.

We all know what happens when he does go all out.

Later Delta never stood a chance against Naruto from the get go here.

It’s important to note that what made the battles in episode 65 & 189 awesome,

was simply because of the efforts both opponents put in the fight eventually.

These efforts culminated in the overall greatness of the battles.

However, there was no such effort here. It was just a one-sided smackdown in favor of Naruto only.

as In the Manga, Naruto jumped to dogde Delta’s laser beams but in this episode

he simply moved away just like how the 4th Raikage did against Sasuke’s Amaterasu in Shippuden actually.

This was a testament to Naruto’s speed as well. I also remember there was a long-time.

It was all about Naruto’s speed and Kawaki’s speed altogether.

Most especially who got to Himawari first after she was thrown up into the sky by Delta.

Well, everything was clarified in this episode. From what we saw that,

Delta wasn’t really after Hima but was only using her as bait to hit Naruto with her laser beams.

We also saw that Naruto reached Hima before Kawaki.

But many credits go to Kawaki as well.

as He was fast too. and Fast enough to intercept the beams before it hit Naruto.

and the short Convo between Boruto, Kawaki and Hima was added.

Of truth, Hima was a liability as she wasn’t supposed to be there in the first place.

Even One more point here is that we now truly understand just how lethal and devastating Delta’s laser beams are.

This was something we didn’t see in the Manga.

as it gradually turned the tree it hit to Ash as well as Kawaki’s arm.

Though Kaguya’s ash bones are far more fatal in that regard.

additionally The last Convo between Boruto and Kawaki was very touching.

because It showed that Boruto cares deeply for Kawaki and both boys are finally coming together as brothers.

in fact Kawaki’s Sacrifice was indeed a far greater repayment for the flower vase he broke.

finally I can’t wait to see Delta get what she deserves in the next episode.