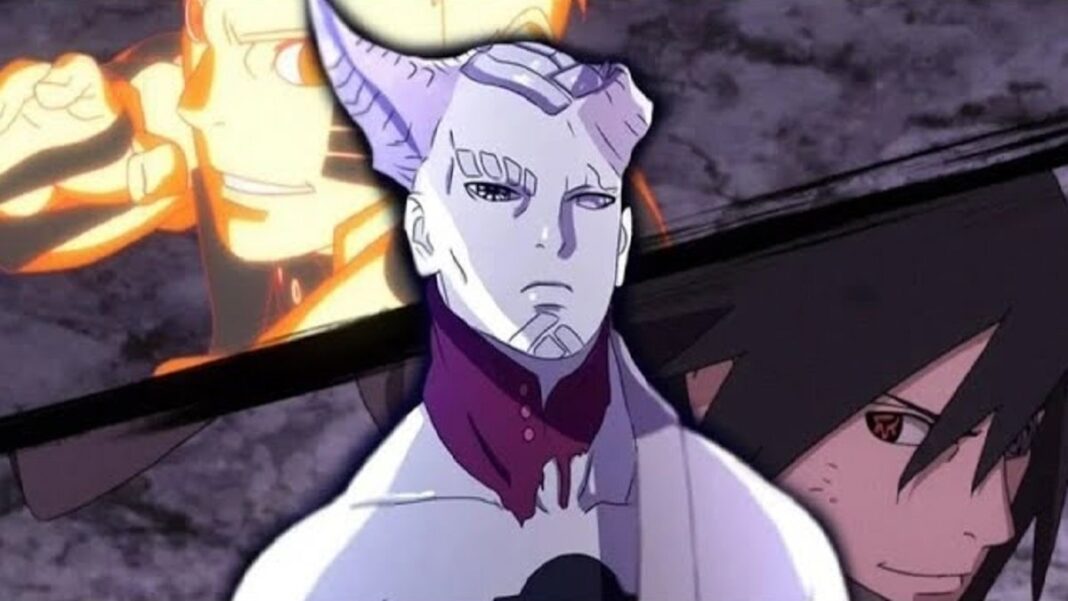 BORUTO EPISODE 204 This episode was simply SUBARASHI!! In a way, you could say that it was the dark version of super episode

65. All the same, it was a splendid episode even though I wasn’t satisfied with a few things here and there.

I give it a perfect rating of 10/10. I had already made some points on the battle in the post I made two days

ago. However, there are still key points still left to pick out from this episode. Let’s look at them.

1 – BORUTO EPISODE 204 While it is certainly true that both Naruto & Sasuke bit way more than they could chew, and met their

waterloo in the battle against Kama stage 2 Jigen. they were able to make a case for themselves against his

stage 1 form. Aside from his very troublesome shrinking abilities, they eventually got the upper hand. Had

he continued to battle them in his stage 1 form, he would have surely lost.

Kawaki who was obviously in a state of shock and confusion after Naruto was taken away.

3️ – While it is of course very important that Boruto learns to activate the Karma on his own, i believe the sync

did in this episode. Once Kawaki’s Kama is activate consciously or unconsciously, Boruto’s will too no matter

the distance and will immediately send a message that something is wrong allowing for immediate intervention.

4️ – As always, Mitsuki was calm enough to realize that since Kawaki’s prosthetic arm was still glowing and

intact, it meant that Naruto was still alive and his Chakra was still active. This info was able to defuse the

tense situation for a time.

5️ – As expected, it seems Shikamaru is next in line to take the reins of authority in Naruto’s absence. So

contrary to what some Sakura fanatics have been insinuating for sometime now, Shikamaru, not Sakura will

become the next Hokage if anything were to be happen to Naruto. Though it is unclear how the line of

succession works since this will not be an official selection.

Naruto/Sasuke vs Jigen battle. This would give KK the precise info needed for the events that’d follow in the

7️ – Sasuke really deserves accolades for his efforts in this battle. For a ninja with little to no healing or

regenerative abilities like Naruto, he did wonderfully well. His speed, strength, resilience, durability,

endurance, and power were all admirable. I now fully understand why Momoshiki compared Killer B’s

Chakra/power to him and why Jigen was well bent on eliminating him first. Give Sasuke Kurama’s or

Gyuki’s Chakra and you’d have a ninja more powerful than Naruto and Killer B put together. Jigen’s praises

for him throughout the battle was well deserve Indeed.

8️ – When chapter 38 was released 2yrs ago, i argue that Sasuke can sense and follow not only Naruto’s

chakra but the Chakra of others as well. The anime corrected the manga scene by making Sasuke teleport

directly to Sakura at home. The only way he could have known that Sakura was at home at that particular

point in time was only if he sensed her Chakra and opened a portal directly to that location.

that of Boruto and Sarada as he was completely disorient and lost at the abductuon of Naruto. Or was it

as a result of the manner in which Naruto was abduct? He facial expression at the deactivation of the

prosthesic arm seemed to have reiterated this point.

10 – Jigen might not be a suitable vessel for Isshiki but he has lasted for thousands of years all the same.

understandable that his body gave out after being pushed to the limit. Can’t wait for up coming episodes.

BORUTO EPISODE 204 Some QUESTIONS FOR EVERYONE

2 – Why do you think the Uchihas never learned sage mode or became Jinchuriki? Was it because of how hax their

abilities would become? Cause i believe that becoming a jinchuriki of a tailed beast and subjugating it internally is

far better than subjugating and controlling it externally with the Sharingan.

Thanks so much for your contributions.