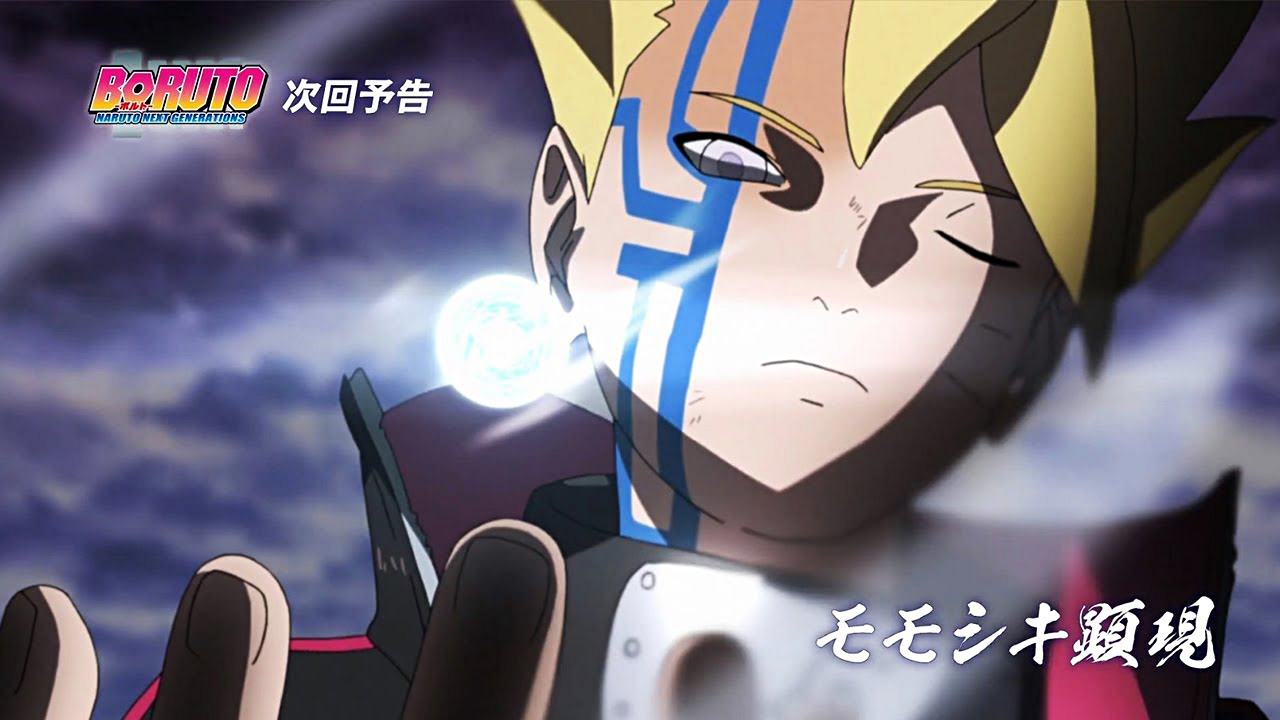 BORUTO EPISODE 208: This episode was good Although I was a bit dissatisfied with

some omissions and additions of certain scenes here and there, I give it a good rating

of 8/10. Let’s look at what transpired in this episode.

1️.) As befitting his personality when he was alive, Momoshiki was ruthless and

merciless in his assault on Boro. Even going as far as to take Chakra from Naruto

to obliterate him. Very Momoshiki-like.

2️.) OMG!! The expression on Boros’ face when he realized KK lied to him about the

development of Boruto’s Kama and pulled a classic chess strategy to take him out.

It’s was one of horror and disbelief. In the end, the poor man didn’t even get a

chance to make any move or decision. He died a very pathetic and painful death.

BORUTO EPISODE 208 For a moment there

3️.) It’d seem that once Boruto’s Chakra is totally exhausted, Momoshiki takes over.

But after absorbing Naruto’s chakra and defeating Boro, Boruto began to regain

consciousness. This means that Momoshiki’s will, like Sasuke, said, is gradually

4️.) It was good to see Naruto & Sasuke regain consciousness after such an ordeal

at the hands of Jigen. And most importantly have their family by their side.

5️.) The presence of Nanobots in Kawaki’s blood explains his regeneration, Sci-NinTech

of a different signature.

6️.) Shikamaru’s room meeting with all of the parties involved was a good inclusion

to what we originally had in the manga. It gave us a clear picture of how the info

Sasuke’s amazement at Sarada’s use of the Chidori, its a role in the cornering of Boro,

intervention to save those affected. It was a good scene.

7️.) I’ve seen a lot of people castigating Shikamaru for being overly cautious and

suspicious of Kawaki just as Tobirama was in the past. I felt the same way at some

point as well However, his fears are very well placed and very much understandable,

just in the village but in the home of the Hokage. Like Hashirama before him,

Naruto is naive, kind and trusting to a fault which is why a no-nonsense advisor like

Shikamaru is pivotal to keep him in line While of course, i agree he should have

developed some level of trust and kindness for Kawaki after he helped save Naruto,

I do believe he acted out of sincere concern for the safety of Konoha. Naruto himself

came to see his point at the end of the episode.

8️.) I’m failing to grasp Sakura’s role in this episode and why she wasn’t present by

her daughter’s side as it was in the manga. Making her burst into the meeting room

do that, she would have followed her husband back to her daughter’s room. A

traumatized and hospitalized daughter will always need their mother But she instead,

walked in the opposite direction I don’t know why that was, but maybe the producers

wanted Sarada to hear everything about Boruto from Mitsuki and Sasuke. Cause in the

Manga, Mitsuki took Sasuke outside to discuss the details of Boruto’s Kama while

Sakura remained with Sarada in the room. What do you think?

BORUTO EPISODE 208 For a moment there

9.) The concern Kawaki showed for Boruto after the meeting was very good to see.

growth, he was able to not only relate with what happened to Boruto, but

communicate to him what happened very perfectly.

11.) I like how Sasuke & Mitsuki were able to deduce and summise that both Boruto

& Kawaki are vessels to revive some other Otsutsukis via Kama. This was pure

12.) The courtesy visit of Shikadai & Inojin to Kawaki & Boruto was another welcome

inclusion in this episode. It gave us a very a clear picture of the improving relationship

between Kawaki and Boruto’s friends. Chocho mentioned his like for Taiyaki and the

memory of Sarada suggesting the best flavor to try out made everything perfect. It

was all good to see Most especially the boys eating and playing cards together. Also,

Sumire’s care for Kawaki is yet another one of such relationship improvements. Her

explanation of why her friends call her “Class Rep” was nice to see as well..

13.) It’d seem that after the recent events in which Jigen came for Kawaki and

Momoshiki took over Boruto’s body, both boys have started to own up to their fates

and desire to bring him back. He now feels like an outcast without a home. Things are

heating up really nicely. It’d be interesting to see his outing with Hima in the next

What do you think about point number 8?

it. Sai goes on to say that Jigen might have changed the “Coordinates” of the location.

two different locks How can i forget the location to a country I’ve visited once before?

It doesn’t make any sense.

Thanks so much for your contributions and answers in advance.