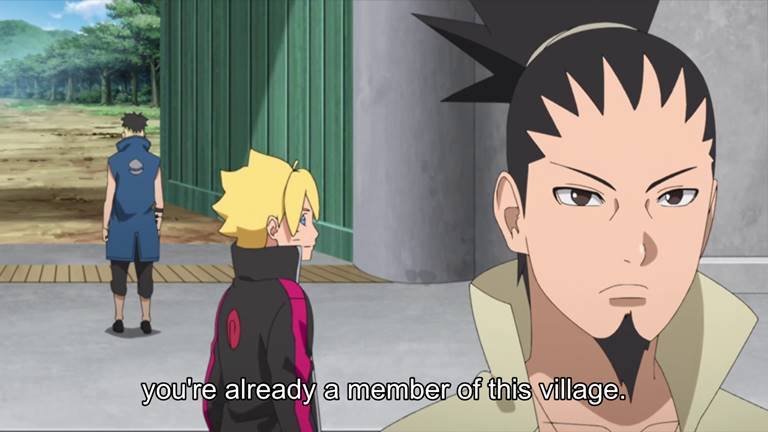 It was very touching and emotional. I give it a rating of

10/10 as both the producers & animators did a splendid job.

Now gather around people as we review and summarize

1️.) Kawaki’s dream in the first scene looked very ominous as it

seemed to be a presage or rather, a presentiment if you like to

the events of episode 1 and chapter 1.

2️.) It was good to see yet another episode that was partly

focused on Himawari, not since Hima-super episodes 126 &

154. Most gratifying of it all was the producer making sure to

explore her deepening relationship with her step-brother, with

regards to the growing bond between the Uzumaki family and

Kawaki. Her concern for Kawaki when she didn’t see him in the

3️.) Hima is indeed Naruto’s & Hinata’s offspring as we were

opportune to witness yet another display of peak kindness &

compassion from the girl. Going as far as to steal foodstuffs

much peculiar and synonymous with what Naruto & Hinata

did in the past.

4️.) I couldn’t help but correlate and corroborate the message

being passed across in this episode with the message passed

in manga chapter 60. Like the story of the estranged wolf

ostracized by its pack as a result of its conspicuous difference,

pack to die, we see a troubled boy conflicted with nightmares

brought about by the recent events in the village. We see

Kawaki was overwhelmed with the fear of a calamitous and

and caring Uzumaki family but in Konoha as well.

He feels responsible for not just the unfortunate and brutal

events that took place just days before, but the events to

karma again while he still remained in the village. And so to

him, leaving the village was the best course of action as he

Uzumaki family he has come to love and cherish.

5️.) Although he made a very short appearance, Mitsuki’s

keen perception & intelligence came to the fore once again

as he was able to accurately pinpoint and explain to Boruto,

what troubled Kawaki so and why he was acting strange.

Something Boruto took for granted earlier that day. This

helped Boruto understand what exactly was going on and

how to act accordingly.

6️.) The death of Jagga was a vital learning experience for

Hima. As she came to understand that the world is way

more tempestuous than she realizes and that there are

many circumstances that can’t be controlled or handled.

7️.) Once again we found yet another similarity between

Kawaki and Naruto as both of them have “messy handwriting”.

Boruto commented on Kawaki’s letter here just as Sasuke did

ever, Boruto’s talk no Jutsu didn’t seem to have any effect as

Kawaki was still intent on leaving.

Shikamaru the most cautious and suspicious person

8️.) Ironically though, it was Shikamaru, the most cautious

and suspicious person in all of Konoha who pulled off the

perfect talk no Jutsu feat. He made Kawaki understand that

although he still didn’t support his stay in the village, he

trusts and respects the words and choices of Naruto, his

friend & Hokage He also pointed out that Konoha is the

safest place in the world for Kawaki as no other village

would be stupid enough to harbor and accommodate a

wanted fugitive In the end, this was more than enough to

break Kawaki and convince him to stay. A wonderful feat

indeed for someone like Shikamaru who seemed to have

changed from the same person we knew in Shippuden.

main gate. For a village currently on guard after the recent

attack of Jigen at the house of the Hokage, they sure seem

to be quite lax in this aspect In time past, there were always

guards at the gate. I remember Izumo and Koketsu were

there when Sasuke tried to leave the village Or were the

guards excused on purpose by Shikamaru? What do you think?

Thanks so much for your contributions and answers in advance.