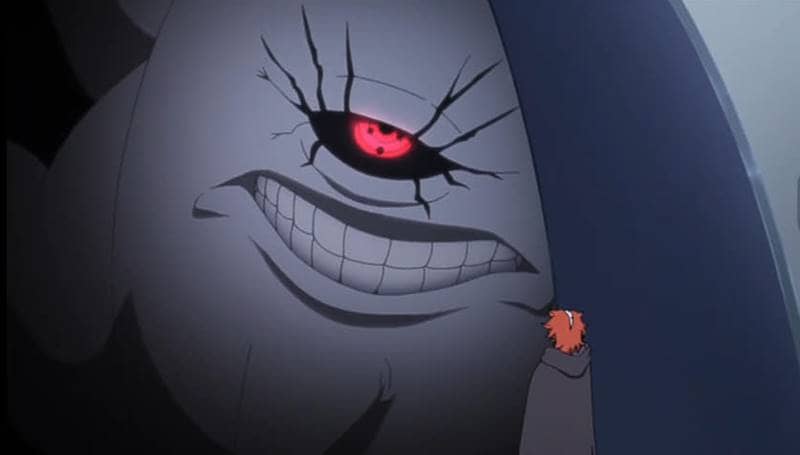 BORUTO EPISODE 210 REVIEW: Hello Everyone, and welcome to yet another episode review & summary.

This episode was a rather very sad and heartbreaking episode. I hadn’t felt this annoyed not since episode 192. I rate this episode a 6/10 as I was greatly dissatisfied with its ending. Let’s look at why that is and what exactly transpired in this episode.

1️. Just as we pointed out in the last review, it’d seem that Jigen did personally change the coordinates of the dimension housing the Ten tails so as to prevent others from gaining access to it.

2️. Now, concerning Delta’s answer to Jigen’s question as to whether it was Sasuke who obliterated Boro. I’ve been seeing a lot of debate regarding this topic since Sunday and I’ll like to clear the air on it. Delta was indeed referring to Sasuke in her answer since he was the main subject of the question asked. However, we can’t take Delta’s answer as a valid point to mean that BoruShiki is more powerful than Sasuke

just because she found a huge crater with no trace of Boro. So let’s examine her response to Jigen’s question to find the answer we need.

Jigen: Did Sasuke Uchiha do it?

Delta: No, I don’t think so. It looks like he(Boro) was wiped out by a significantly greater force.
I’ll use “a significantly greater force” as an explanatory point here.
Boruto’s Vanishing Rasengan is more powerful than the regular Rasengan and so the effects of the big version used by BoruShiki on Boro were even more devastating as it completely obliterated him. Well, the same thing happened to Momoshiki himself in episode 65 when he was defeated by Boruto.

It is very much understandable that Delta, who has never fought Sasuke to know the full extent of his powers, would imply that the “force” that obliterated Boro was “significantly greater” than Sasuke’s since she found no trace of her college. The lightning release of a 19yr old Sasuke completely obliterated half a meteor and his adult self could bust a gigantic hole in a waterfall with just the Chidori alone. So yeah…

Sasuke can definitely do the same damage as BoruShiki. Let’s give Delta the benefit of the doubt here as she was giving an answer based on her limited knowledge of Sasuke’s abilities. Or was it not the same Delta who huffed & puffed so much until she was manhandled by Naruto? Without a doubt, Sasuke is more powerful than BoruShiki and can surely do more damage than what we saw from BoruShiki. So let’s excuse Delta’s ignorance in her reply to Jigen’s question

3️. I very much like and appreciate that Naruto paired Konohamaru with Sai on this reconnaissance mission. It was very much pivotal for the restoration of confidence, morale, and some sort of revenge for Konohamaru who was hospitalized for days after what Jigen did to him. Very understanding therefrom Naruto.

4️. From Inori’s statement, it’d seem that Boro was a victim of Madara’s infinite Tsukuyomi(IT) during the war. If this is actually true, then everything would make complete sense and fall perfectly into place. I speculate that before the war, Boro’s life was a complete mess. And since IT is a genjutsu that gives its victims a perfect dream of how their lives should have been or should be, Boro must have found satisfying peace & tranquility in his dreams.

And so, when the Genjutsu was broken, he must have been distraught & crush so much so that he went about forming a cult and brainwashing his followers into believing that the infinite Tsukuyomi is a technique that saves. I also believe it was after the war that he was recruit as an inner member of Kara. And of course, with the number of gullible followers at his behest, getting test subjects for Jigen’s Kama transfer experiment was no big deal.

5️. It seemed as though Tsuzumi & Shirabe knew fully well all of Boro’s schemes as well as the lies he fed his poor followers on a regular basis. But even after learning of their master’s death, Shirabe most especially still convince that Boro was going to return. He even nullified Konohamaru’s speech and got back into the heads of other brainwash followers who went on to sacrifice themselves for what they truly believed in. Boro is indeed a frightening character. Such hypnotic distortion of the mind is no easy feat. That’s a far more persuasive ability than Madara, Itachi, Obito & Naruto.

6️. The tragic stories of Inori & Akari are a huge lesson, not just for too gullible girls & women out there but to the entire society at large. Not every act of kindness is back up by pure intentions and good motives. Inori’s elder brother died while trying to convince her of Boro’s fraudulent schemes in episode 202. Now she’s dead as well, leaving her mother & family with tattered hopes of her return… Akari on the other hand, whose love for her brother and only family Kagari, couple with her hopes for his return which kept her from being completely brainwash, end up losing not just her brother but the cult leader she so revered in the end. Such a tragic and calamitous ending for both women.

7️. I don’t know what the anime producers were trying to accomplish here but Sai’s prevention of Konohamaru from consoling Akari at the end was a very wrong move. She had just experienced great loss and needed to sympathize with… It also seems they abandoned her and all those they saved and lied to Naruto about what happened to them. Wouldn’t it have been a better idea to first bring them back to Konoha for a much-needed mental evaluation by Ino and Ibiki? Or at least take them back to their respective villages and families?

1. What do you think about point number 7?

2. Jigen initially asked Delta to come back to the hide-out but she instead went about destroying Boro’s cathedral and killing his followers. Why was that? She did grumble about being on clean-up duty or something. Who gave her the orders to destroy the building and eliminate Boro’s followers?

3. This is for manga readers. If Boro’s cathedral was indeed nearly destroy here with all of his followers either murder or driven out, why is the cathedral still intact with guards present in manga chapter 56 and above? Did someone rebuild it or was that a different cathedral?