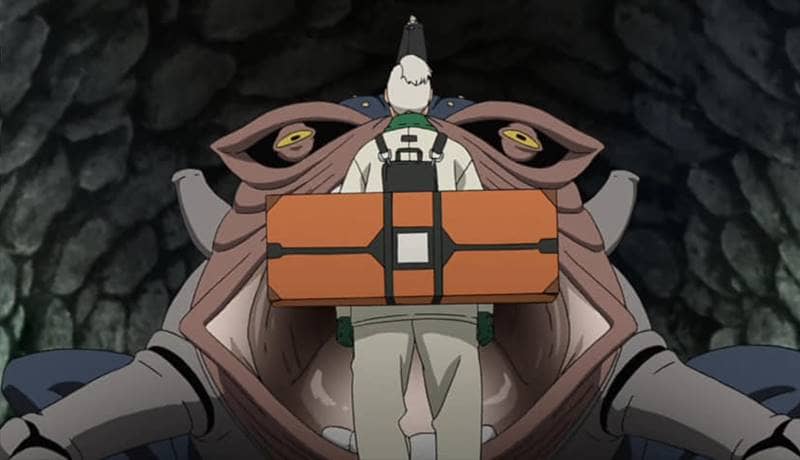 BORUTO EPISODE: This episode was really good!! After reading manga chapters 44 & 45 more than a year ago, I always wondered how they were going to be Animated and produced. And truly, the animators & producers didn’t disappoint. Aside from some changes here and there, the episode was great. I rate it a perfect 10/10. Let’s get straight to our review.

1️. In their earliest conversation, Amado talked about a secret weapon that was made available thanks to the info KK gathered in Konoha. KK then replied that it was “good to have lots of secret weapons since their opponent is Jigen”. This secret weapon couldn’t possibly be the new unknown cyborg we saw in manga chapter 60? Is it? Or is it Boruto? Since KK once said that the secret to expunging Jigen lies with Boruto’s mastery of the Kama. What do you think?

2️. After what Amado did to Delta in this episode, I’ve got to say that he’s definitely the second most powerful member of Kara after Jigen. Of course, it was always expected that a genius scientist such as himself will surely leave a shutdown button in all of his cyborg creations and modifications. Even KK was weary of the same programming being placed on him. As I always say, the creature can’t outsmart or be more powerful than the creator. What happened to Delta is proof of that.

3️. It seems KK mapped out Konoha really nicely as he was able to give precise directions to Amado as per where to go once he arrived in the village.

4️. I think it’s safe to conclude that in the near future, the current ‘Jutsu only’ system of operations in the Ninja world would be extinct. Ninjas will be forced to incorporate tech into their Jutsu for higher effectiveness and efficiency. Using the only tech, Amado quickly overpowered and overwhelmed Shikadai and his team with literally little effort. Well, he did come prepared…

5️. Inojin’s talent and skill with his clans mind related techniques was on show once again in this episode. Without any hand seals, he was able to telepathically communicate with his mother about the dire situation they found themselves in. And ino in turn did the same with Shikamaru. Quite ingenious from the young lad.

Kara had been in the shadows for many years (BORUTO EPISODE)

6️. Kara had been in the shadows for many years gathering all sorts of info and intelligence. It is very much understandable that Amado will know the names of everyone of importance in Konoha. Moegi and Sai included. Though the latter was shocked as to how Amado knew this.

7️. Some people have been asking why Amado chose Konoha for his destination of defection and not other villages like Kumo, Suna, and Iwa. It’s quite simple really. Not only does Konoha have a state-of-the-art S&D department, the number 1 amongst the 5 great nations, they are also the village with the most powerful ninjas capable and able enough to face the threat of Jigen and Kara. Other villages weren’t just good enough for Amado.

8️. The inclusion of the meeting of Boruto, Sumire, Kawaki, and Katasuke at Naruto’s office was really great. I never really understood why they were all there in the Manga but the anime clarified that by showing us that Katasuke was there with his assistant to give his report on Kawaki’s body which had been rejecting the forced chakra sync of Naruto’s prosthetic arm. Naruto also agreed that they’d need Kara’s tech if they were to fix Kawaki’s body. I also like the excitement Katasuke displayed after learning who Amado really was from Kawaki. It’s always been his dream to collaborate with other scientifically bright minds.

9️. Shikamaru’s angry and emotional outburst at Amado was very much understandable from a fatherhood perspective. However, I do believe that he should have been calmer and exercised more restraint. Amado was right when he said the “the ex-commander in him will be disappointed”. Naruto also said that it was very much unlike Shikamaru to act that way. Well, we all saw what fatherhood did to Sasuke in his battle against Shin. So I guess this is yet another exposition as to what happens to your brain and temperaments when you become a parent.

In the Manga, Amado started his ‘Otsutsuki & Ten tails explanations’ first before going to KK’s live feed. The anime seems to be taking a rather different route and approach here as he didn’t start his explanations but instead went straight to KK’s live feed first. The anime also omitted Boruto’s question to Sumire in chapter 45 about what ‘defection’ meant. Probably this was an attempt to make Boruto look less academically inept. It’d be interesting to see just how the anime navigates these manga changes.

Amado was able to activate the projector in his glasses with just a single glance. This correlates with Eida’s statements in chapter 57 about Amado’s remodeling of his eyes with tech. Quite interesting I’d say.

It’d seem that Jigen knew of Amado’s betrayal and co-conspiration with KK for a long time. Though why he never acted sooner is beyond me. What do you think?

QUESTIONS FOR EVERYONE (BORUTO EPISODE)