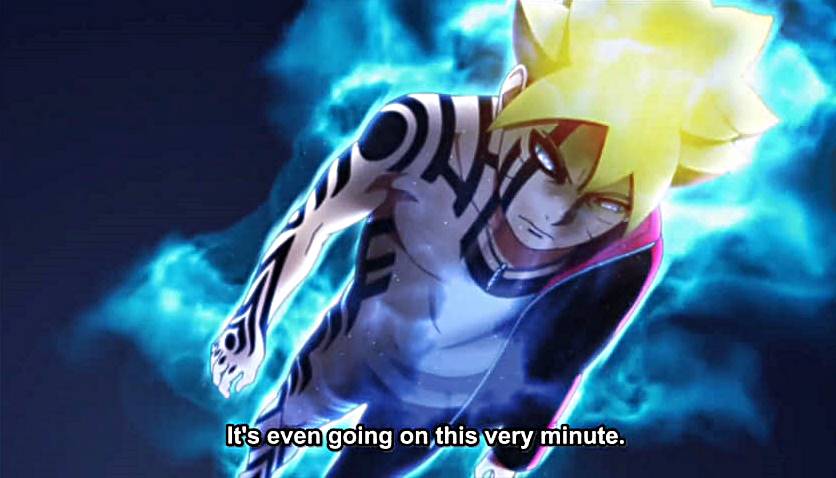 BORUTO EPISODE 213: Many apologies for posting this very very late. I was preoccupied with a lot of things these past few days and couldn’t put pen to paper.

This episode was quite interesting and good to watch. Manga chapter 46 was animated to perfection as we saw much info clarified in this episode. Let’s go straight to the review…

1️. While of course, I very much understand the ancient role ninjas have always played as tools and pawns, I find KK’s comfort with being used as a tool by Amado quite unsettling. Even though he was created as a tool to kill Jigen, he should at least have another purpose for existing. Or is this also part of his programming as a cyborg? What do you think?

2️. As Naruto watched the ensuing battle between KK and Jigen, he seemed to have recognized the similarities between KK’s fighting style and someone else’s. I wouldn’t go so far as to spoil this info for anime-only followers but will allow next week’s episode to burst the bubble.

3️. Amado’s explanations on the origins of the Otsutsuki in the Manga were changed. In the manga, he described them as Chakra parasites but here, he simply called them troublesome aliens who devour planets via extremely annoying gardening.

4️. Amado’s explanations confirmed Boro’s sermons that there will be yet another Infinite Tsukuyomi. And so, unless there’d be another Ten tails jinchuriki, the God tree will be responsible for casting the Genjutsu itself this time. Amado’s explanations also give us a clear understanding of what would have happened during the war had Naruto & Sasuke not broken the Infinite Tsukuyomi. A Chakra fruit would have been born and that would’ve signaled the end of the Ninja world as we knew it.

5️. The genetic data constituent of the Chakra fruit explains the different types of Dojutsus possessed by all the Otsutsukis we’ve seen so far in the series. From Kaguya’s RinneSharingan to Momoshiki’s palm and forehead Rinnegans, down to Urashiki’s 3 different inter-switchable Rinnegans. Of truth, this is how they update themselves and evolve with the possession of different abilities centuries after centuries. This is more than enough mind-blowing info on genetics to make a Scientist like Katasuke super excited.

6️. I always knew Jigen figured out KK’s and Amado’s plan and was bidding time to take action. In the end, though, his refusal to take action on time was a gross miscalculation on his part which has surely sealed his fate for good.

7️. The scene showing the concern and fears Shikadai’s teammates have for him was a welcome inclusion. Most especially that of Chocho.

How the Otsutsuki are reborn (BORUTO EPISODE 213)

8️. Amado’s explanations on how the Otsutsuki are reborn were interesting and all but, I still don’t understand why killing Boruto is the only option to stop the revival of Momoshiki. Shouldn’t cut off Boruto’s arm which houses the seal stops the extraction process? Kind of like unplugging a TV cord from the Socket? What do you think?

9️. Isshiki was caught off guard which was why he lost to Kaguya. No battle ensued between the two as Kaguya fans have always wrongly insinuated. It was just a powerful surprise attack from Kaguya which left him for dead. All thanks to the availability of monk Jigen and also his SH ability, he was able to survive.

10. I know Jigen was 10% strong but I still find it rather surprising that KK was able to corner Karma stage 2 Jigen who was able to overwhelm both Naruto and Sasuke. Or was that an incredibly wakened Kama stage 2 Jigen? What do you think? Using the mud to create a ritual seal was even more astonishing.

2) In his explanation about his conspiracy with KK, Amado mentioned that they took a gamble by sending their secret weapon(Kawaki) to Konoha. Why is that?