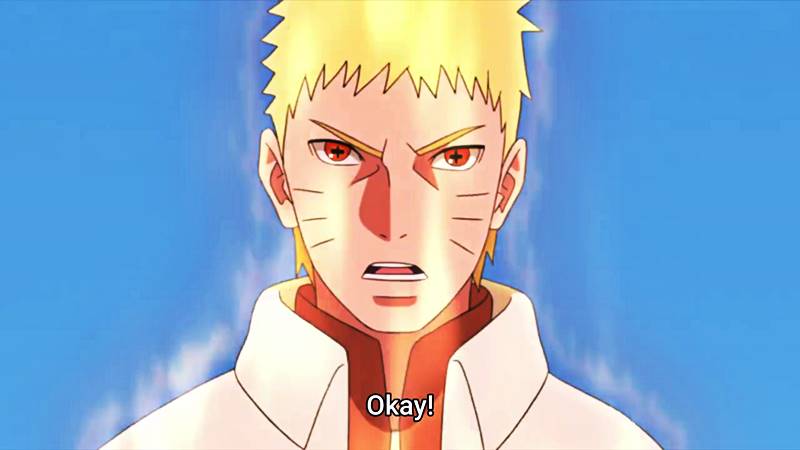 BORUTO EPISODE 215: I’m very much compelled to label this episode as ‘perfect’ since info on manga chapter 49 was clarified and elaborated upon despite some changes here and there.

this episode, coupled with the lazy animation let me down as we are going to see in this review. And so, I have no choice but to give this episode an underwhelming rating of 6/10. The lowest I’ve given to an episode in a very long time. Let’s quickly look at what transpired in this episode.

1️) why Koji Kashin’s flank and left leg were greatly affect despite his left arm is the only part of his body gravely injure by Isshiki’s attack.

the key reason for that was simply the trauma from the damage of nerves in Koji Kashin’s arm and other parts of his upper extremity, exacerbated by the manner in which he fell. And so, not only was his left arm numb, his flank and left leg were as well.

2️) I very much understand Naruto’s initial apprehension about letting Boruto fight alongside others. He couldn’t stand the thought of his son getting taken over by Momoshiki. But of course, this was something he couldn’t control and would have happened sooner or later.

3️) It seems Danzo’s emulation knew no bounds as not only did he consider the Uchiha a threat but the Hyuga as well.

were there really any powerful clans that this man wasn’t envious of and didn’t consider a threat to Konoha?

I’ve always wondere why the Root building was constructe so deep underground and I think I might have found my answer. I theorize that this area has a high concentration of Lead(Pb) which in real life,

has a radiation shielding property, making it impossible for X-rays to pass through it. It’s no wonder the Byakugan can’t see it. What a perfect place to hide Kawaki. What do you think?

Shikamaru’s intelligence after the world-famous Strategist

4️) It was good to see Tsunade again. It seems she lives somewhere in the village… Well, that aside, after Sunday’s release, the Fandom went wild with what it thought was an obvious

nerfing of Shikamaru’s intelligence after the world famous Strategist & Tactician lamented to those present that he had “no plan” for Isshiki’s attack on the village. While I was of course flabbergasted at this statement at first, I did give it some thought later.

There were absolutely no tactics or strategies that Shikamaru could have come up with at that point in time, that would have been effective against Isshiki Otsutsuki.

As I always say, the brain of a bookworm and Prodigy will always be rendere useless in the face of overwhelming power.

Such were the circumstances Shikamaru found himself in. The original plan was always the only plan. Rock Lee and others were to buy time pending the arrival of Naruto and Sasuke, Konoha’s strongest heroes. So he had no choice but to ask for the help of his colleagues.

5️) Sasuke is indeed a teacher who truly understands his student. While Naruto’s fatherly instincts influenced his approach to Boruto joining the fight, a calm-headed Sasuke saw things differently. While of course he truly understood Boruto’s situation and the dangers that loomed if Momoshiki were to take control again,

he did believe that Boruto was still a key chess piece in the battle against Isshiki and so it proved in the end.

He was also prepare for the latter repercussions and consequences for letting Boruto join the fight even if it meant eventually unleashing Momoshiki. Even stating that he wouldn’t mind killing Boruto for the sake of the village if he had to. Quite astonishing.

I kind of like Isshiki as a villain (BORUTO EPISODE 215)

6️) I kind of like Isshiki as a villain. Unlike other villains in the past whose attacks on Konoha were marre with the senseless killings of innocent civilians and incessant destruction of village infrastructure,

Isshiki was rather purposeful and goal-driven in his attack just as Jigen was. He didn’t come with murderous and destructive intent but was the only force to engage.

when he was confront and also when the info he so desperately sought after wasn’t given to him. In fact, the anime omitted the scene in manga chapter 49 where he killed a ninja and shrunk a building to drive home his intentions. This is an interesting side of his personality, unlike the cruel and deranged Momoshiki.

7️) It was good to see Sarada and Mitsuki in this episode, most especially when we consider they never made a manga appearance after Team 7’s defeat of Boro until after the defeat of Isshiki. Though I wonder why she was still injure and where exactly was Sakura.

8️) This point is one of the reasons why my ratings for this episode are so low. Of course, there’s no debating the fact that Lee, Choji, Kiba, and Tenten never really stood a chance against Isshiki. Not even Tenten in possession of Hagoromo’s tools stood a chance. However, my grievances lie elsewhere.

How on Asgard was Konohamaru, the first guy to attack Isshiki with a Rasengan able to get back up when others couldn’t? Was it willpower or? I’m confused.

Well, I’ll just say that this feat is something huge for a Konohamaru fan like myself who has always argued that is a Hokage-level ninja.

His ability to get back on his feet while others were knock out cold is more than enough proof of that.

impressed with Ino in this episode

9️) I was very much impressed with Ino in this episode. She showed just why she’s the head of Konoha’s sensory division as well as the head of the Yamanaka clan. Just as Tsunade did with Katsuyu during Pain’s attack on Konoha years ago.

Ino did the same with her mind transmission technique, connecting, guiding, and leading everyone to safety to make enough room for Naruto to go all out.

An applaudable and admirable feat deserving of many accolades. However, though, Naruto and Sasuke going all out would have caused significant damage to village infrastructure. It’s good thing Sasuke and Boruto came up with that awesome plan to take Isshiki someplace else.

10) Thank goodness Naruto was right on time to save Konohamaru and engage Isshiki. It also seems that he is still in possession of his Six path sage mode, something many others have refuted and disputed.

11) Once again, Sasuke proved just how cool he still is with his Ameno entrance, and why he’s still the brains of the Naruto/Sasuke tag team with his well orchestrate plan involving Boruto to chicanery Isshiki. Even Naruto was left flustere as to what was going on.

12) I’ve got to hand it to Boruto. Using the space time ninjutsu of Momoshiki’s Kama was indeed very commendable. He seems to have gotten a hang of it after using it twice before. Can’t wait for next week’s episode.

2) Let’s put Hyuga’s loyalty to Konoha aside. Do you think the Hyuga really had what it took to stage a successful coup like the Uchiha as Danzo feared?