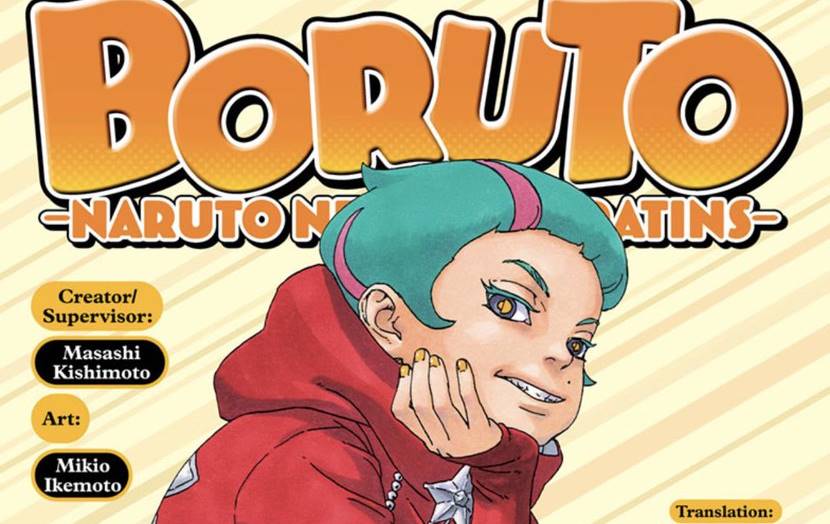 BORUTO MANGA CHAPTER 60: For someone like me who always gives high ratings to

episodes & chapters with good action, I’ve got to admit… This chapter swept me off

my feet. Even without any action, it contained more than enough info to leave me

grinning after reading it. I rate it a perfect 10/10. Both stories & the plot were perfectly

put together. Many Kudos to Kishimoto. We are finally starting to feel the power of his

pen. Now get your shovels & spades as we begin to dig for points from this chapter.

1️.) I’ve got to say… Code’s claw mark ability is really something. By leaving his claw

markings on desired surfaces, he can simply move through and from these marks

distance. It’s also possible to bring people through these markings albeit one at a

time. This ability is also not limited to dimensions as this is how he’s able to get to

the Ten tails location Shikamaru likened it to Minato’s FTGT However, I wonder

which is more convenient, since all that is needed with Code’s ability is the placement

of claw markings in various locations.

BORUTO MANGA CHAPTER 60 For a moment there

various locations in the 5 Great nations without detection. As Shikamaru said, it’s

into tracking and finding just one man. It’s quite hilarious I’d say. Not even the

Akatsuki attracted this much attention until the latter stages of Shippuden.

3️.) This was Ibiki’s first manga appearance. I summise he was responsible for the

interrogation of the aforementioned Kara outers. I mean torturing people is what

this man does best.

4️.) Amado’s promise to help Konoha and the other great nations might truly be

very genuine. However, his refusal to give Sumire explanations as to what he’d

there’re ill intentions and ulterior motives behind all that. His creation of a Cyborg

for Konoha’s sake might be a ‘get out of jail’ card, but as I’ve said for a few years

now, Amado is not to be trusted. Everything about him is becoming more fishy with

every passing chapter Since a Cyborg is half human, half Robot, I theorize that the

person inside that incubator is someone very familiar and loyal to Konoha Though,

from the looks of it, the person in it looks like Delta. The hair i mean. More should

be revealed in future chapters.

still a child who loves to play around so it’s understandable. Bug, on the other hand,

didn’t appreciate this goofy attitude of his thought.

him will immediately trigger a reaction just as we saw him do here. Quite a

7️.) Code was quite clever with his ploy at making Daemon disclose more info on his

abilities. However, Eida was even more clever as she prevented her brother from

revealing the full workings of his abilities. She knew Code couldn’t be trusted yet and

interrupted the conversation accordingly. I’m quite certain that Daemon’s abilities

have a weakness and this was what Code was trying to get out of the naive child.

happen with her brother too after witnessing his abilities first hand. This is why he

used a sly tactic to try to make the boy reveal his weaknesses. Good thing Eida is

quite an intelligent girl.

BORUTO MANGA CHAPTER 60 For a moment there

8️.) Kawaki’s situation in this chapter was somewhat similar to Naruto’s as a toddler

less cruel than what was done to Naruto. But it’s still very much understand why he

feels lonely, left out, and out of place in the village.

9️.) The love, warmth & care the Uzumaki family showed Kawaki here was the

has Kawaki finally been welcomed officially as a member of the Uzumaki family,

a deep-rooted bond was established in the last pages of this chapter. And even

though insurmountable problems may come in the future, this family looks set and

ready to face it together.

10.) Like Dom from Fast & Furious, I very much respect the power of family, love,

and unity. However, I believe these three alone won’t be sufficient enough to stop

side effect. It’d be interesting to see what more intrigue Kishi has in stock for us.

1.) Kishimoto is writing a hardcore of a maze storyline here and is doing a wonderful

job at keeping fans glued to the series. I don’t think we know what to expect or

2.) With the deepening bond of love & care in the Uzumaki family right now, I am

tragic and calamitous events of chapter 1 and episode 1? What on Asgard could

Boruto & Kawaki? As an optimist and a positive person, I am gripped with fear at

the thought of this.

Thanks so much for your answers and contributions in advance.