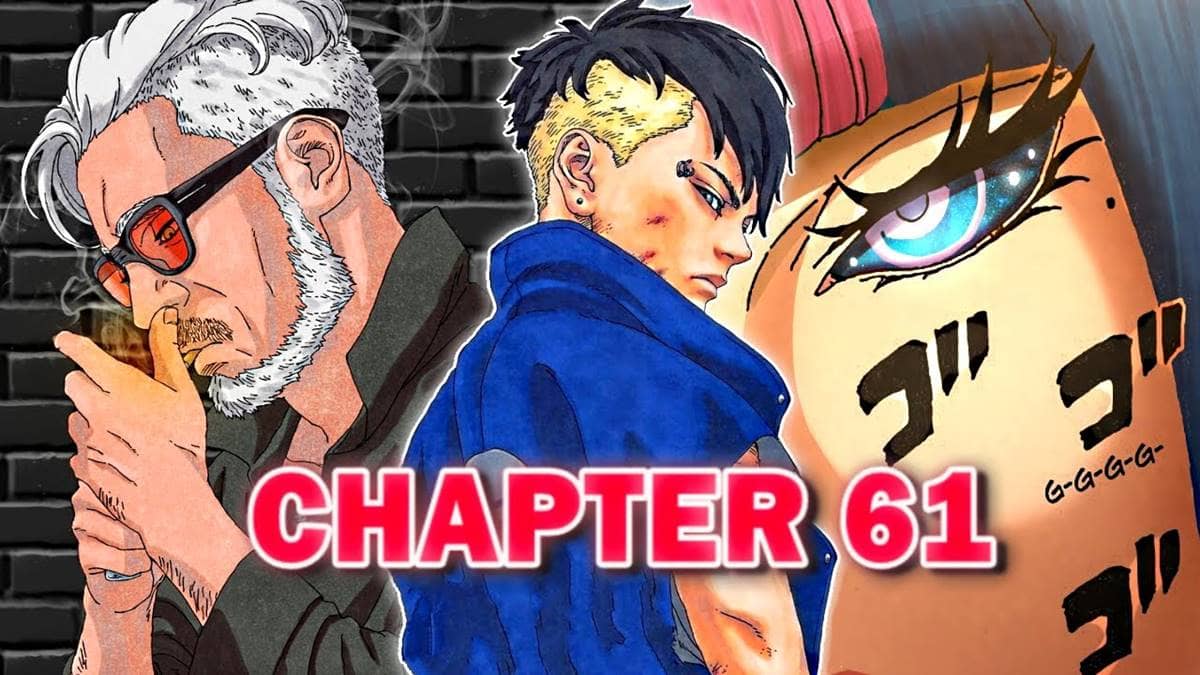 BORUTO MANGA CHAPTER 61: welcome back to your favorite Boruto review & summary. I hope you’ve all been well. For some weeks now, I’ve been forced to move my reviews to an alternate group but thank goodness, we are back. FINALLY! So please, for all those who missed recent installments of my reviews, do check out the hashtag at the end of the post which of course should guide you accordingly. Now, to the business of today.

How should I put this… Ummm… This chapter was quite informative and very much quintessential in terms of intrigue and filling up relevant plot holes in the Boruto series. We’ll be looking at those very shortly but first, I give this chapter a rating of 9/10. Now, gather around people as we explore this chapter together.

1️. I wonder whose phobia is worse.. Boruto’s Scopophobia or Madara’s Paruresis? I’ll let you guys be the judge of that.

2️. Once again, Kawaki’s intelligence, craftiness, resourcefulness, and keen sense of perception came to the fore here. In episode 190, he was able to quickly perceive and use a spilled info from Sumire, a stolen Sci-Nin tool, and the popular ‘bathroom tactic’ to facilitate his escape from Katasuke’s lab. He did the same in chapter 53 when he cleverly used the shadow clone technique taught to him by Naruto to deceive Isshiki and send him to an early grave. And so, it was no surprise that he did the same in this chapter. By listening to Boruto, Shikadai, and Inojin’s intricate explanations & descriptions of the modus operandi of Konoha’s sensory division, he was able to perfectly pick out key info to facilitate his escape. This is a Sasuke-like ability a rather carefree Boruto seldom displays. Quite impressive I’d say.

3️. It’d seem that not all Konoha ninjas have as much respect for Sasuke as a select few others. This is very much understandable most especially when you consider his past deeds. Still, though, they should at least be knowledgeable and wary of his abilities and battle prowess which are on par with Naruto’s. It seemed as though the older join was just deliberately being disrespectful to Sasuke and Sasuke for one, though couldn’t do anything, didn’t like it. The younger join on the other hand really admired his coolness.

4️. Amado’s statement about Code not being “particularly bright” makes lots of sense as it explains why he sought the leading & guidance of Eida to make up for his intellectual handicap.

5️. As always, Shikamaru remains very apprehensive, cautious, and suspicious. Particularly of Amado and rightly so most especially when you consider everything currently happening in and around the village. And I still say again that Amado isn’t to be trusted. Also for a moment there I almost forgot Shikamaru inherited the bad habit of smoking cigarettes from Asuma. And so, it was somewhat hilarious to see him try to stop Amado from smoking on the roof when he was doing the same thing. Good thing he realized that.

6️. I’m relieved Amado & Shikamaru both agreed that the love Kawaki has for Naruto is far beyond the level of normality. A state of pure madness they said. In medicine, we call such a condition Obsessive Love Disorder(OLD) which most of the time, is deeply rooted in Childhood trauma just like Kawaki’s experience at the hands of his abusive guardian Jigen. Though Kawaki is yet to display extreme symptoms of this condition, I can definitely surmise that this obsessive love will continue to grow. And the end results will most likely not be too good. I’m not sure if I can relate this to the root cause of the Uchiha’s curse of hatred since both involve love but with regards to Code’s veneration of Isshiki, I would very well describe it as pure fanaticism and not OLD.

7️. I made mention of Hinata’s emotions and sensitivity in a post I made some days ago and we saw proof of that here as she wept while watching what seemed to be a tragic love movie. Naruto on the other hand appeared to be completely oblivious as always and almost asleep. What a couple!

8️. Eida called Kawaki’s Chakra signature erasure “instinctive” but I’d like to think of it as something he always knew about or rather, something he was taught. I mean he trained for years with Jigen who was obsessed with forcing the power of karma on a child. And so, I believe Kawaki knew what he doing from the get-go. Like I said in point 2, he intelligently used the info he obtained from his friends, cleverly lied to Hinata, and then craftily deceived the sensory ninja on watch outside of the house to facilitate his escape. Everything had a purpose. If it was really instinctive, then Boruto wouldn’t have been quite perplexed at his ability to sense the original Kawaki escaping. What do you think?

Since both boys are 80% Otsutsuki already, it’d of course make sense that they are able to sense each other via a unique Otsutsuki frequency. No wonder Boruto could detect the ruse in an instant.

Eida didn’t or rather couldn’t travel with Code

9️ (A). From the looks of it, it seemed Eida didn’t or rather couldn’t travel with Code but stayed behind to care for her brother. I’ve got to say, her communication patterns with Code though very funny, seemed effective. Eida also seemed to have two different types of Senrigan. The left dojutsu has a Cresent moon-shaped Iris, black sclera, and white pupil. The right dojutsu has a pattern somewhat similar to the Rinnegan with a rippled iris and pupil but with a white sclera. Most probably for seeing events of the present and the past respectively. Amado is able to create powerful living cyborgs so it’s no surprise that he’d be able to manufacture a powerful dojutsu such as Eida’s Senrigan. Though many questions still remain unanswered as to how he did it.

(B). Eida’s explanation on the Otsutsuki’s ability to erase their chakra signature really explained a lot of things and covered up some plot holes in the entire Naruto/Boruto series. Most particularly, why Six path sage Naruto couldn’t sense Jigen’s Chakra who was using SH.

10. It’d be interesting to see what happens in the next chapter. Kawaki left the village to protect Naruto knowing fully well that Code is far more powerful than he is. Code on the other hand, with the guidance of Eida, is relishing a sour reunion with Kawaki. I wonder if Boruto will erase his Chakra signature as well to go after Kawaki. What do you think?

(BORUTO MANGA CHAPTER 61) QUESTIONS FOR EVERYONE:-

2. There’s usually always an indication of the next chapter release date at the bottom corner of the last chapter page. But that wasn’t the case here. Instead, we got “to be continued”. Why is that? Is the manga going on a break or is that just a clever suspense tactic to keep fans on edge? What do you think?