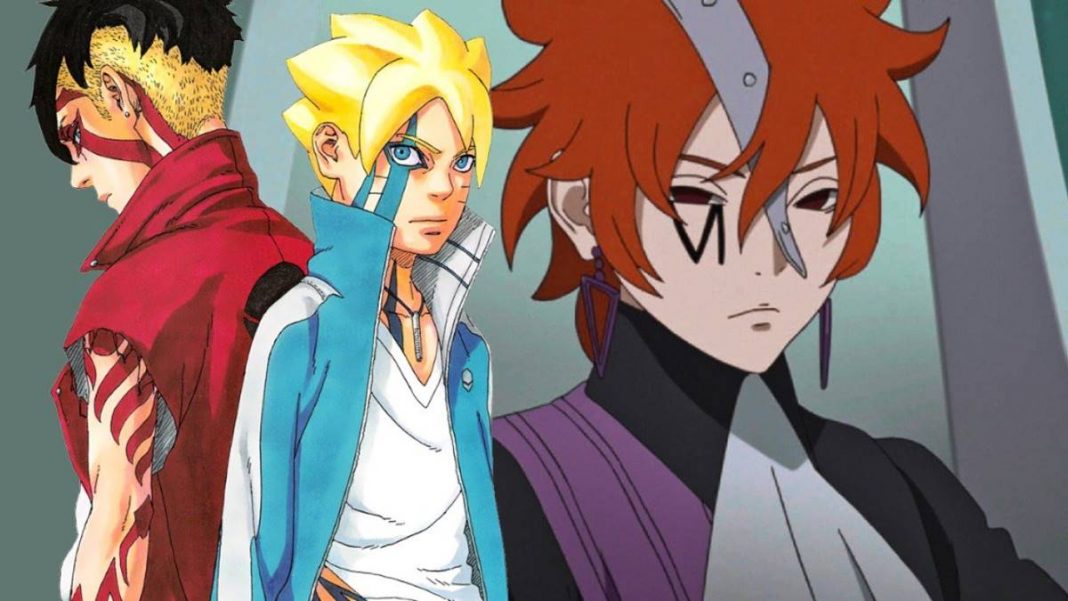 BORUTO MANGA CHAPTER 62: Today, we’ll be examining the events of the latest manga chapter. While the info in this chapter was very much elucidatory, I was particularly unsatisfied with just how abruptly it ended. But of course, it’s Kishimoto we are dealing with here, a man famous for his use of the suspense technique. And so, I rate it a 7/10. Now get your magnifying glasses as we look carefully for points in this episode…

1️.) Looking at the first 4 pages, it’s very much understandable why Nishi couldn’t sense Kawaki despite being a sensor and having an elevation advantage. As we saw in the closing pages of the last chapter, Boruto seems to be able to sense “Kawaki’s presence” not Chakra via a unique frequency. This is most likely an Otsutsuki frequency since both of them are now full-fledged Otsutsukis. It’s quite similar to the multiverse in DC where inhabitants of various earth can’t be tracked down unless specific frequencies are used.

2️.) I’d like to describe Eida’s powers as a portable talking Google map. Only you don’t need internet for this. The manner in which she was guiding Code was quite fascinating. The top-notch navigational system is right there.

Naruto use the superior sensory ability of Sage mode

3️) A. Now, this is something I really wanted to point out. Why didn’t Naruto use the superior sensory ability of Sage mode immediately after Boruto reported that Kawaki had absconded? Or would that be useless as well? We all know that unlike other sensory abilities in the series, Sages use nature energy as pointers to sense both ‘presence’ and ‘Chakra’ many distances away as seen in Shippuden.

So I strongly believe that even if Kawaki was masking his Chakra signature, a Sage would still be able to sense his presence via nature energy around him.
Why in the world was Naruto inquiring directions from Nishi and Ino when he himself had a superior means of finding Kawaki? It was as though Naruto had forgotten he had Sage mode and was already somewhat panicking… I’m quite flabbergasted. What do you think?

B. I don’t want to jump to conclusions just yet but do you think the loss of Kurama has prevented Naruto from being able to use sage mode? I mean we all know it requires a huge amount of Chakra to access sage mode. Or is this just plot at work once again?

4️.) Code’s Teleportation belt straps are quite a tool. It would seem that once a person or body is in plain sight, he’s able to quickly strap onto them thereby giving him the ability to cover more distance in a short time. Very convenient and handy I’d say.

5️) A. Boruto once again displayed his quick thinking and genius intellect. By sneaking out and going after Kawaki without Naruto’s permission, he’d be giving the sensory division the opportunity to follow his Chakra to where Kawaki is. Everyone including Shikamaru was panicking and didn’t think of this. Awesome from Boruto!

B. Boruto still seems to be in possession of Sasuke’s forehead protector and wore it here since he gave his to Kawaki some chapters ago. Like Paul This insinuated, this might be when he gets the eye scar. But time will tell though…

6️.) A meeting between Code and Kawaki was always going to end one way. Kawaki absolutely stood no chance against Code and was completely manhandled. Also, his pleas to save Naruto and the others fell on deaf ears as Code is determined to kill all 4 of those responsible for Isshiki’s demise. Well, it’s now 3 people since Kawaki has excluded all thanks to Eida.

7️.) Eida’s concern for Kawaki in this chapter was interesting to see. She wasn’t at all happy with Code’s brutalization of Kawaki. “You’ve totally battered Kawaki’s pretty face”… That statement really got me.. Eida’s infatuation with Kawaki is something straight out of Bollywood.. She was like a princess wanting her precious package delivered to her ‘unspoiled’.

8️.) Code might be a human but he’s very much like an Otsutsuki in terms of personality and attitude. Very cold and cruel. I’m beginning to fully understand his obsession and dedication to the Otsutsuki. It’s no wonder he’s inherited Isshiki’s will and mission. He was angry at Kawaki for groveling on the ground pleading that Naruto and the others be spared when a vessel of Isshiki should stand tall and be proud. To Code, such an act was degrading.

9️.) I’m happy Boruto arrived just in time to stop Code from taking Kawaki away to Eida. That was some hot kick right there. The connections between Boruto and Kawaki getting stronger with each chapter. Can’t wait for the next chapter.

QUESTIONS FOR EVERYONE (BORUTO MANGA CHAPTER 62)

1. What are your thoughts particularly on point 3?

2. This one is a quiz question. Aside from Kawaki, name 3 other characters in Shippuden who could somehow or totally mask their chakra signatures using various means.