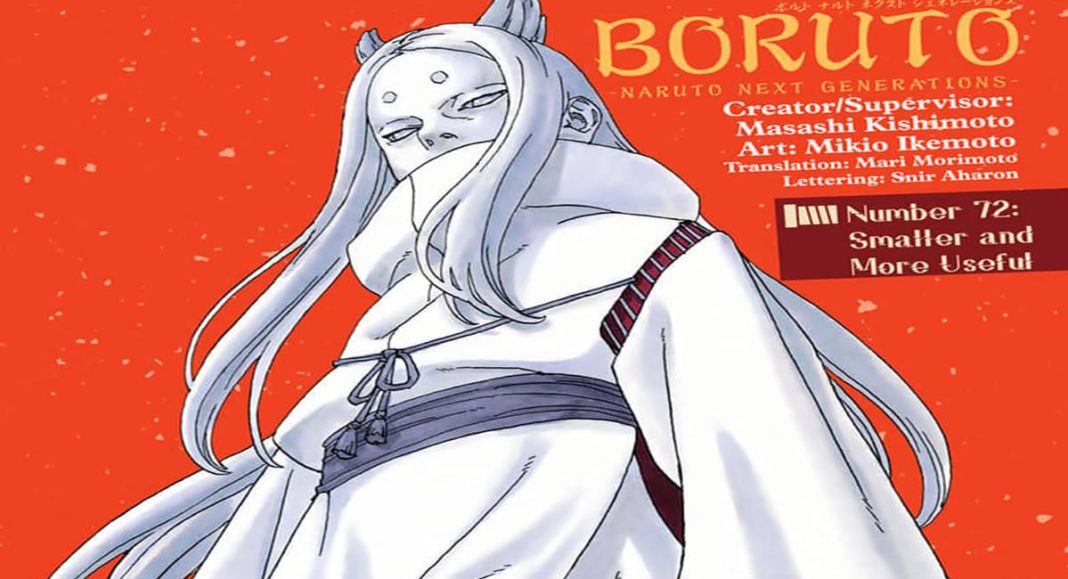 This chapter was one of the best to be released in recent months. Our one month wait for it wasn’t in vain at all.  I rate it a perfect 10/10 as it was intriguing, pulsating, elucidatory and very much interesting, Now join me as we review this chapter together.

1. The first two pages shows Shikamaru interrogating Kawaki with the aim of acquiring some info on Amado’s true intentions. This interrogation however turns sour when the rude Kawaki uses insults and mockery to rile up Shikamaru much to the laters disgust and Naruto’s disappointment. In the end though, neither Shikamaru nor Kawaki knew the core reason why Amado actually restored Kawaki’s Karma.

2a. The next seven pages take us through the sights of the phone call conversation between Shikamaru and Amado, who’s at a train station on the outskirts of the land of snow alongside Eida and Daemon. As demanded by Amado, Shikamaru is to make provisions and accommodations for both Eida and her brother Daemon who’ve recently cut ties with Code and’ve agreed to ally themselves with Konoha. Amado also made Shikamaru aware of his rescinding of Code’s limiters as well as a caution not to antagonize the siblings. According to Amado, with the siblings on Konoha’s side, the threat of Code shouldn’t be relevant. Or so he thought…

B. HELL HAS NO FURY LIKE A WOMAN SCORNED! That was Eida’s message to Amado if he dared to betray her. Even worse is if he failed to play the perfect match maker between her and Kawaki. We also see that Eida’s Heart steal ability has a multi-continental power scale as she has the power to enchant the entire human race. And for possessing such a frightening ability, she loathes Amado who created her.

3a. In the next fifteen panels, we’re further taken through the emotions of the reality of Boruto’s current situation and circumstances with the Karma. First we see him preparing to honour a summon from Shikamaru. We also see an emotional Hinata break down in tears as she worries for her son. She’s had to endure all the terrible things that had happened to her family in recent weeks. Particularly with Boruto who’s been embarking on very dangerous missions lately.

In the battles against Momoshiki, Urashiki, Deepa, Ao, Boro, Isshiki, and Code, Boruto had somehow managed to survive and come back home in one piece. It’s no wonder that his mother fears that every day might not always be Christmas. Boruto however reassures her that like other times, he’d surely return home safe and sound this time around.

B. On the other hand, Momoshiki, whose consciousness still resides in Boruto after using the remaining 18% of his data left to be extracted to revive Boruto, was irritated by this statement. He was puzzled as to why Boruto will be so positive and optimistic when prophecy of an ominous future had already been made known to him.

Notwithstanding, Momoshiki challenged Boruto’s positivity and optimism as naivety. Stating that none of those qualities will save him from the calamity and tragedy to come. He further ranted that when the prophecy is indeed fulfilled, Boruto will be so crushed that he’d lose every will be live. And when that happens, he’d proceed to take Boruto’s body for himself and live Boruto’s life for him. A sad and twisted scheme for which Boruto vows to truncate.

That said, i surmise that Momoshiki and Boruto will eventually be like Naruto and Kurama. Once Momoshiki discovers that Boruto is able to overcome and come back Strong from whatever tragedy and calamity that befalls him, he’d be left in awe. But mind you, breaking Momoshiki will be an Herculean task. Far more difficult than what Naruto once achieved with Kurama.

Kurama’s hatred was as a result of an accumulation of centuries worth of exploitation and subjugation by humans. It was a rightly justified hatred. The Otsutsuki however, are an innately cruel and wicked race. Infamous for laying waste to countless number of planets and civilizations without an aorta of remorse.  It’d take something far more powerful than the talk no jutsu for Boruto to break Momoshiki.

C. A few seconds later, Mitsuki and Sarada arrive at Boruto’s house only to find him in a state of pandemonium. They chase after him as they eagerly anticipate their first mission in a while. It’s also important to point out Mitsuki’s continued faith in Boruto. As he believes that no matter the situation or circumstances that he faces, Boruto will always be Boruto.

In a reflection of the anime, we see Himawari suggesting to her mother Hinata if becoming a Ninja would be the best medium to support and protect Boruto, whom she cares for very much. She also expresses concern for her mother as she wonders if becoming a ninja would multiply the already existing worry Hinata has for Boruto.

4A. The last sixteen pages can otherwise be summarized as the REVENGE OF THE FALLEN. We see Code appearing in the Ten tails’ dimension alongside Bug with the sole intention of using its power to facilitate and exact his revenge on all those who have hurt him. But before I go into that,

I’ll like to clear the air on something that has generated a lot of debates since the release of this chapter. It is with regards to the rogue 10 tails and the rods binding it.

A lot of people have argued that the continued existence of the rods binding the ten tails days after the untimely demise of both Jigen and Isshiki proves that they were not organically created by either Jigen nor Isshiki.

It’s wide knowledge that the Rods used by Rinnegan users and the Otsutsuki always disappear after the user dies. Madara and Momoshiki are examples. However, the bone of contention is whether or not the rods binding the Ten tails were actually created by Jigen/Isshiki or were artificially manufactured, or were created by some other Otsutsuki. Let’s look at two possible explanations for this.

1. The first explanation is that those rods might very well be artificial in nature and not organic which might explain why they didn’t disappear after the deaths of both Jigen and Isshiki.

2. In manga chapter 45, Amado stated that he doesn’t know where Jigen’s ten tails came from. And so, from a careful study of the murals in the dimension where the ten tails is being held, we can surmise that there’s a possibility that this ten tails belonged to some other Otsutsuki and was somehow transferred to the possession of Jigen/Isshiki. Whether this Otsutsuki is alive or not remains unclear. However, i believe any of these two explanations could very well be the reason..

B. Back to Code… Whilst citing his relief at Sasuke’s inability to teleport to this dimension all thanks to the loss if his Rinnegan, he expressed caution that Both Boruto and Kawaki can easily achieve the feat via Karma. He further recounts his loss at the hands of Daemon but reassures Bug that all is ok since he has the ten tails at his command. Thereafter, Code begins to use his claw marks as a medium to adjust the size of the ten tails. Thereby making it easier and less taking for him to command and use. By enveloping the ten tails with his claw marks, code isn’t only able to shrink it to a more useful size, but is also able to create clones from the giant behemoth.

These clones seem to be stronger and very much different from the ones created in Shippuden back during the fourth Shinobi war. They also have Code’s claw mark abilities and are very much capable over using them. It’d be interesting to see how things go in the next chapter.

Thanks for reading this review. Please do leave a reaction or a comment if you can. Sharing this blog in other social media platforms would also be much appreciated.