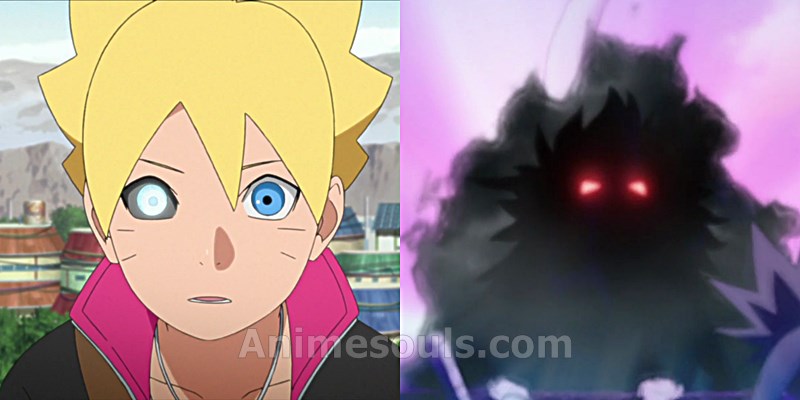 First I want to say I didn’t think of this theory I saw it from a You tuber Ace Operative “about the nue part” but I will eleborate on it and also Boruto’s eye. A nue is what Boruto’s creature is speculated to be influenced after. Nue (鵺, 鵼, 恠鳥, or 奴延鳥) is a legendary Japanese yōkai or mononoke. Appearing in the Heike Monogatari, it has the face of a monkey, the legs of a tiger , the body of a Japanese Raccoon Dog and the front half of a snake for a tail. Source:- https://en.wikipedia.org/wiki/Nue

A yokai (ghost, phantom, strange apparition) are a class of supernatural monsters, spirits and demons in Japanese folklore. The word yōkai is made up of the kanji for “bewitching; attractive, calamity” and “spectre; apparition; mystery; suspicious”. Source:- https://en.wikipedia.org/wiki/Y%C5%8Dkai

Mononoke are vengeful spirits (onryo), dead spirits (shiryo), live spirits (ikiryo), or spirits in Japanese classical literature and folk religion that were said to do things like possess individuals and make them suffer, cause disease, or even cause death.                       Source:-  https://en.wikipedia.org/wiki/Mononoke

Now i want to elaborate I think Boruto eyes is influenced based upon the pineal gland. Now the pineal gland is considered to be a third eye which is believed to allow you to see the unaware. And many people who claim to achieve the unlocking of the pineal gland claim they see evil spirits. Which will explain why Boruto saw the purple chakra on people.