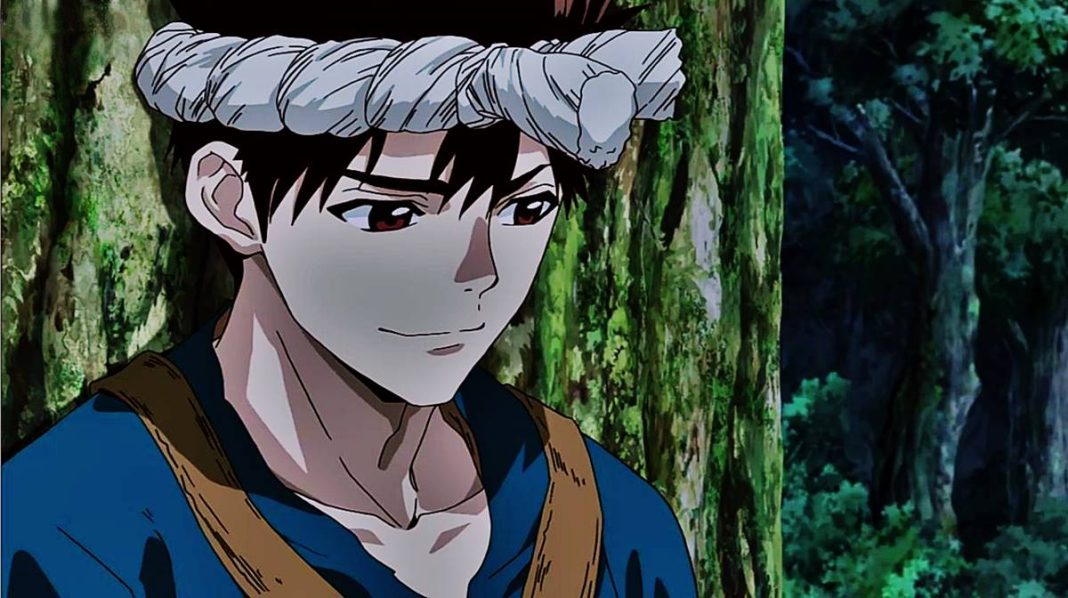 Chrome: Hello guys how are you all? Today in the blog I am writing about Chrome from Dr. Stone.  His original name is kuromu. He is a male human with an age of 27 currently. He is a sorcerer later becomes a scientist of Ishigami Village. And one of the main characters in the series. He made his manga debut in Chapter 17 and anime debut in episode 7.

As of physical appearance, he is 170 cm long and with dark brown eyes and a hair color of brown. He keeps a rope tied around his head like a headband. He is very cheerful and always keeps up with everyone.  About his outfit, he wears short sleeves, a dark brown shirt, matching pants, a belt of rope. Chrome also has a cape when he was introduced that matched his outfit color with a rope as well.

he was first introduced as a sorcerer but eventually turned into a scientist of the village. Originally he was a rival of senku but later as he was thought about science he became friends. He was always fascinated by natural resources and at a very young age experiment with different materials despite having little and no knowledge about humanity.

In science, kingdom chrome serves Senku in his works not officially but as his right hand as a part of the kingdom. That is why Chrome was included in the Five General as one of them. He is also a human among the person who was depetrified. Chrome is gifted in both chemistry and craft. He makes chemicals with Senku and building with Kaseki.

He is full of energy and has passion and curiosity. His interest grew in science first he was included only in sorcerer. He becomes friends with anyone regardless of age. He is sometimes not cool and says bad words. Chrome deeply loves science. He loves to explore things. He refers to himself as a pro adventure when rhusui asks.

At first, when he saw Senku be was threatened by his appearance and thought of him as a sorcerer later they became mutual close friends due to science love. Aside from Gen, he is also an ally of Senku. Chrome and Senku shares a common bond. He has high-level thinking skills and analytical powers. He is the only one who has been was a pre-petrified human.

He is a brave and loyal person. When he was caught by Tsukasa he didn’t tell about Ishigami village and Senku inventions when they gave him a death threat and refuse to spoke to him. He loves science. He managed to create reactiy between rocks by trial and error. Chrome also loves helping others in making inventions. He was amazed when riding a hot air balloon for the first time.

he is very affectionate towards his friend. Chrome always helps Senku in his work. He was feeling for Ruri but he isn’t aware of it. Even though gen is a threat for them.  Chrome was shkmedy seeing Gens state by magama. He always helped Ruri one such when they gather sulfuric acid. He has risked his life for Finding Senku saying Senku would have done the same.

In Ishigami village, he is very intelligent and curious. He and kaiseki are the same having some science knowledge. Chrome was the first a sorcerer but later become a scientist. He is also good at arithmetic things. He is good at exploring things. His intelligence was showing when he help Senku in showing how sound traveling through the phone. With his things he also created things like water wells, metal detectors, etc.

he is an average physical power person when compare to others. When asked he is more likely to go down on a long voyage In place of Senku. Due to his intellectual abilities. He uses a pole vault to gather his material and used a pole vault to use Tsuka traps. He has some weak spots. But he also knows the enemy’s weak points that is why he defeated magma when fight knowing his weak points.

His name comes from a metal name chromium with the symbol Cr and atomic number 24. He often says yabe which usually means cool and awesome. He sometimes gets depressed when he discovered something and people already knew in this world. Another funny instance is that chrome is getting beaten by Kohaku when he called him a gorilla.