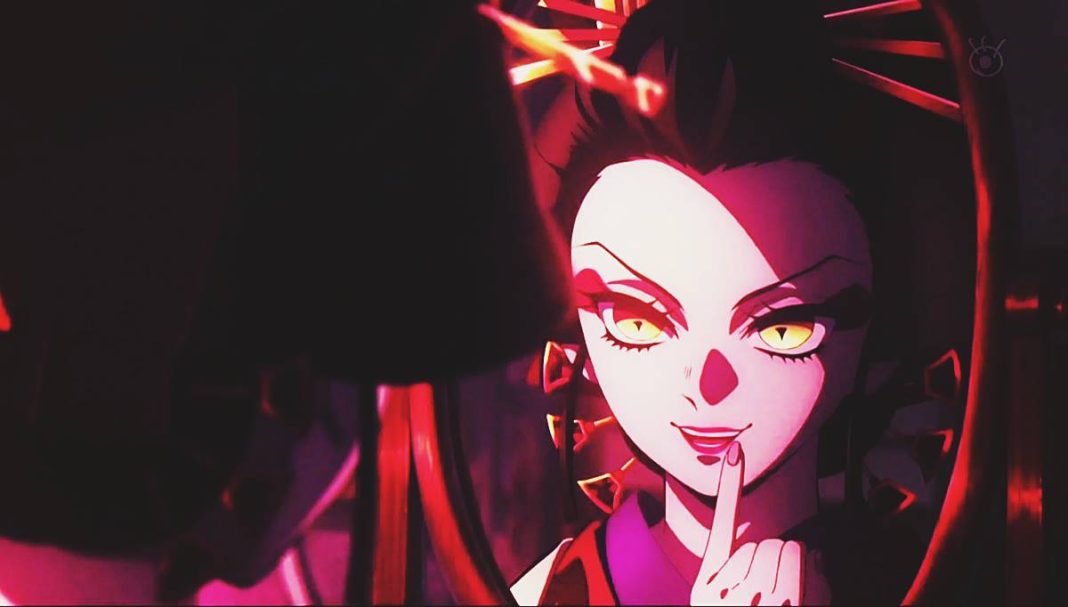 Daki- the demon from Demon slayer Facts and Things.

Daki: Hello guys today, In this Blog I am writing about the Daki the demon from The series demon slayer. She is a female character. Daki means the fallen princess.  She made her Manga debut in chapter 59. Daki is the main villain of the Entertainment District Arc. She is one of the twelve moon positions at rank six with his brother Gyutaro.

As of Physical appearance she has a overage of 200 and with black hair color with silver lines green. And Green lime eye color. She is tall fair-skinned. she has a ponytail. Daki usually disguises herself as oiran. She wears two-piece version of kimono and wears high ankled shoes. Before becoming a demon she was a beautiful girl with long white hair. She wore a kimono with irregular square patterns.

Her child’s name was Ume. She was born in the “Entertainment District” basically a lower class area where prostitute and oirens were sent. Her mother was mentally unstable which was first noted by her big brother. Her father was not mentioned but he must be one of her customers. When Ume was born her mother hated her and tried to kill her but her brother saved her. Her mother later died due to a disease.

Her brother was very supportive of him. They started working in that area in a brothel. She was very beautiful and her brother would find customers for her. Once her sister was pleasing a samurai but she poked one of her eyes when the samurai insulted his brother. The samurai tried to kill them they fleed away but they were almost dying due to bad conditions.

when she was dying they were founded by the Upper Rank six demon Doma, at that time. He helped them and turned them into demons. After becoming a demon she was very cruel and everyone know him. They were then caught by Muzan and he made them Upper Moon Six. She killed many hashira and killed them.

she is very cruel and takes fun in killing people around her. Daki loves her brother but sometimes when Gyutaro makes mistakes she scolds and lashes out at him. She promised him that whatever happens they are together the strongest alive. Though being a courtsen, she is a good seductress. She handles her clients very well. She is sometimes childish due to the fact she was 13 years old when she was made a Demon.

she is a very powerful Demon. And with her brother, they are very difficult to combat. Muzan said that she is a very special demon.

A. Stamina and Endurance-  she can endure any attack on her. Such is seen when her head is sliced off and she was still not in any pain or any troubles whatsoever. She has infinite stamina as shown.

B. Immense strength and speed- She is extremely fast. She almost Defends both Tanjiro and Zenitsu’s special attacks. Her brother also enhances her powers. She has Muzan blood which makes her even more powerful.

C. Regeneration and Hair manipulate- she can manipulate her hair however she shows. She can turn her hair into any weapon. She attacked Every member with her attacks.  As she is level up Moon, her regeneration abilities are immense. Nezuko attacked her with blood demon art but she just regrow herself again.

she has a special demon attack. She uses a flower pattern obi made from her blood and flesh. They are very sharp. In combat, she manages to shape flesh into sashes and throw them.  They are so powerful that they can repel any attacks. Those can enclose anyone inside and let them die to death. They are very difficult to cut through especially any human flesh.

In the entertainment district arc, she also made a mistake when she thought that the demon slayers as normal persons. Tanjiro, Inosuke, and Zenitsu fought very well with them. Her anger is very dangerous. Daki is very visious in fighting.

Daki has sashes made up of tentacle that is shaped and retain. She can generate dozens of it. She has a special attack named Eight Layered Obi slash in which she extends hee obi ro create a sash attack simultaneously in order to cut her opponent.

1. Muzan initially did not like her and thought of her as a child.

2. Muzan personally thinks of her as a beautiful person. She made him a lot of money that’s why she liked her.

3. As an oiron she made a huge amount of money.

4. She also has the ability to extend her neck. As what she wants.

So that is for today guy hope u like it.