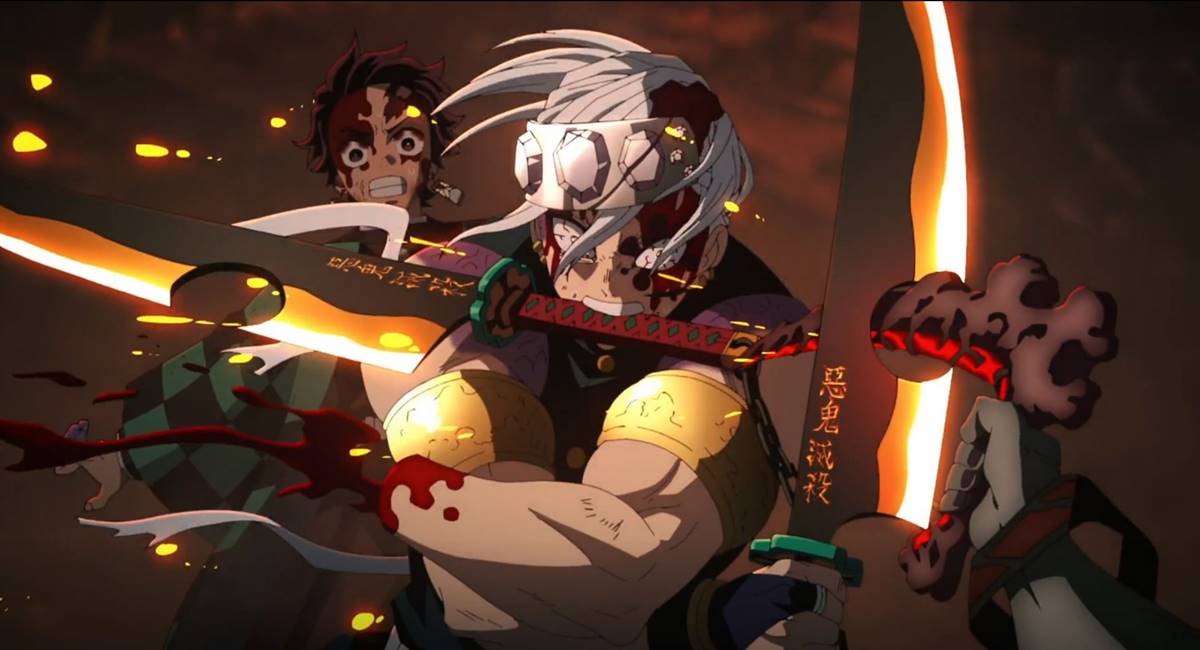 The luckiest moments: Demon Slayer is the anime in which the world is full of demons who kill people for blood or sometimes just for fun. Surviving in this world is a very difficult thing to do for humans as well as Demon Slayers. That is why it requires a good amount of luck and skill to survive even for the ones who are trained fighters. Muzan Kibutsuji, the Demon King is on the hunt for blood and has put all his efforts and thing to find the cure.  Here are some of the luckiest moments in the history of Demon slayers.

During the present Entertainment District arc, when Inosuke was fighting with upper moon Six, he proved that he is a strong member of the Demon slayer corps, despite his lower rank. When he finally found the Daki’s hidden place, he saved two of Tengen’s wives but got attacked by Daki worm belts which made his attacks slow, but Tengen’s wife helped him to get away.

Another thing that made this season cringe that showing a Hashira as a pervert person.  Tanjiro’s life is saved by Shinobu and her helpers many times which shows that he is in debt to them. Tengen was kidnapping Aoi for his mission in Entertainment District but Tanjiro instead helped him. It shows that Tanjrio was brave enough to offer himself for the mission rather than a girl who works as a helper in the Medical section.

8. Tanjiro profession helped him against Muzan.

When Muzan attacked the family Of Tanjiro, he was in the city which is far away from his house, of he was in the house at that time, Muzan must have killed him but he didn’t because he was busy selling coals in the city which saved his life of that he can take revenge for his family against Muzan. But after the learning fight and he became a demon slayer he could have killed the Muzan by himself which will help him win.

7. Nezuko survived the attack of Muzan and also turned into a Demon

He makes few mistakes, and when he does, he quickly dispatches his minions to clean up after himself. Muzan dramatically failed in the case of Nezuko, leaving himself open to a future attack that would result in his own defeat. It’s incredible that Nezuko survived Muzan Kibutsuji’s assault on the Kamado family’s home. Muzan is one of the most ruthless characters in the Demon Slayer mythos.

6. Nezuko and Tanjiro were the First ones to meet Giyu

After turning into a demon, Nezuko was asking for blood but thank god, her humanly emotions were still present in her. Despite the fact that Giyu was sent into this forest to exterminate a demon, he recognizes the worth of Tanjiro and his younger sister Nezuko. When Tanjiro and Nezuko confront the rest of the Hashira and Nezuko nearly loses her life to “the good guys” for the second time,

fans can see how fortunate Tanjiro and Nezuko are in this moment. The moment Tanjiro confronted Giyu Tomioka in the woods outside his parents’ house was perhaps the most fortunate thing that has happened to him since the beginning of Demon Slayer. Nezuko has been transformed into a demon at this point in the Demon Slayer plot, but she lacks the ability to fully control her hunger.

Urokodaki can be called as the man who is the first teacher of Tanjiro taught him fighting and also made Nezuko to control her powers, they must consider themselves lucky that they have met him.  Giyu was lucky enough to meet Giyu in the snowy forest outside of his parents home. If the Hashira has not helped Nezuko then it will be very difficult for them to pass the test of life

This is the best moment and most funny moment when Tanjiro and Inosuke met for the first time. Inosuke is the only person to wield two swords. Inosuke is a beast, both metaphorically and literally. Despite being a secondary character to Tanjiro throughout the plot of Demon Slayer, the boar-headed beast outruns him on several occasions. One of these instances occurred early in their careers when Inosuke breezed through the final selection exam faster than both Tanjiro and Zenitsu. To put it simply, Tanjiro was extremely fortunate to have met Inosuke while serving as a new member of the Demon Slayer Corps.

During the Natagumo Mountain arc, Zenitsu finds himself at odds with a powerful demon capable of transforming its victims into spider hatchlings. Despite defeating the demon with his Thunder Breathing technique, Zenitsu is poisoned and nearly defeated. Fortunately, before losing his life, Zenitsu manages to control his breathing, slow the spread of poison,

and survive long enough for a miracle to occur. Shinobu Kocho is the name of the miracle that occurs. Tanjiro’s crew would have lost one of its primary members if the Insect Hashira hadn’t appeared at the right time.

This one is one of my favorite moments in the show, after saving a train full of passengers and almost drowning, Rengoku still fought an upper level moon to protect his fellow members. The fight was intense but the thing is that Akaza was so powerful that he killed him,

which made everyone’s heart cry. But he gave Akaza a tough fight that is why after killing him he flew away without fighting with others.

Lady Tamayo is very hard to find a demon. He is an ally of humanity which is why she is the worst enemy of Muzan.  Tamayo has both enemies in humans and demons. But she took care of tanjiro and Nezuko and also this helped Tanjiro to save Nezuko from other Demons.