So Many People Know That kabuto Yakushi Know Use Senjutsu But How He can able to use Sanjutsu he Never Go Mount Myoboku ?

Due to the larger chakra reserve’s he gains from Orochimaru remains Kabuto is able to learn senjutsu from the White Snake Sage at the Ryuchi Cave. This allows him to enter in Sage Mode which he can use indefinitely due to his research of Jugo’s passively ability to constantly absorb natural energy. In Sage Mode Kabutos only noticeable physical alterations are the markings around his eyes the four horn’s on the back of his head and brille to give him immunity to genjutsu and other visual attack’s he describes his transformation as changing him from a snake to a dragon.Using Sage Mode makes Kabutos jutsu and physical attacks stronger and improves his physical defences and heightens his speed and reflexes and allows him to sense his surroundings.He can also infuse natural energy into inanimate objects giving them life.

The White Snake Sage is an extremely large and white naga many times the size of a human with it’s massive body wrapped in the thick coils. Along these coils are yellow circular bands It wears a turban with two pointed edge’s and a red orb on the top along with an orange headdress. It also wears a chain with a green orb around his neck similar to the one wear by the Great Toad Sage. he also smokes as well using a long cigarette holder when doing so. 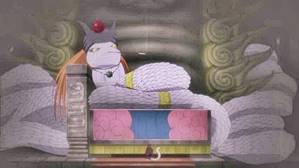 By calling on his esoteric teaching’s it use it’s fangs to bite and inject a person with natural energy. According to the legend if the body can withst and the snake ification the White Snake Sage will accept it without reservation. As a Sage it is very knowledgeable in The senjutsu as it  trained Kabuto how to use the senjutsu and Sage Mode which he mastered.