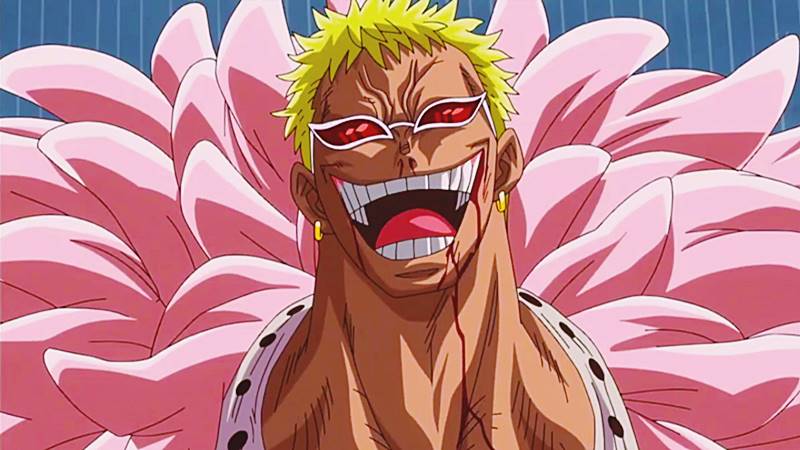 Doflamingo: the captain of the Donquixote Pirates, is one of One Piece’s most fascinating villains. He has a powerful Devil Fruit called Ito Ito no Mi, which he uses to live up to his moniker of Heavenly Demon. He is very strong and powerful. In this blog, we are going to see ten interesting facts about Donquixote Doflamingo.

Donquixote Doflamingo serves as the main antagonist of the Dressrosa Saga in the manga and anime series One Piece. Prior to his defeat by Luffy and imprisonment by Marine Admiral Fujitora, he was the captain of the Donquixote Pirates,

the monarch of Dressrosa, and a member of the Shichibukai. Doflamingo’s defeat and capture, which enraged his associates, including one of the Four Emperors, Kaido, sent shockwaves across the New World. Trafalgar D. Water Law’s arch-nemesis. Magellan is guarding him as he is imprisoned at Impel Down Level 6.

Hideyuki Tanaka has played him in all of his Japanese appearances, alongside Tomoe Hanba as a young Doflamingo. In all dubbed appearances in English, he is played by Robert McCollum, with the voice of young Doflamingo provided by Brittney Karbowski.

Pursuing his defeat and crimes, he was shredde of his titles as king of Dressrosa and one of the seven warlords, and he and the bulk of his men were taken to Impel Down. He is the main antagonist of the Dressrosa Arc, as well as the overarching antagonist of the Jaya Arc,

Doflamingo is shown as carefree and laid-back in most of his appearances. Unlike most of the seven warlords, he appears to be concerne about anything and to be enthralle by most things. In several of his appearances, Doflamingo is seen smiling or grinning at all times. In several scenarios, such as when Whitebeard levels Marineford with his devil fruit ability, laugh and smile. He also has a flamboyant and extravagant demeanor, as seen by his oratory style and his occasional flamingo-like gait.

Doflamingo is immensely vicious and bloodthirsty beneath his quirkiness. Doflamingo used to be a Celestial Dragon who enjoyed harming and enslaving those around him as a youth. He resented his father, Donquixote Homing, for renouncing all of the benefits of being a Celestial Dragon in order to live

in the world with normal people, as well as all of the misery and suffering he had to endure. Doflamingo has no empathy for the people he has mistreated or the lives he has destroyed because of his aggressive nature and attitude, and he always defends it by saying he is superior to humans in general.

Strong folks, according to Doflamingo, have power and might. He also feels that the weak will have no place in pirates’ future. He despises the weak and is shown manipulating people for his own entertainment and benefit. Doflamingo sees the future through his faith and believes that only the strong will survive. Doflamingo, on the other hand, is unafraid to damage the lives of those who are lesser than him

and manipulate them because of his views and philosophy in strong people having dominance. When Doflamingo learnt of Bellamy’s defeat by Luffy, he had no use for him and compelled Sarkies to severely wound him since he believes Bellamy is a threat to him.

who insulted his team by laughing at Pica’s voice. He was also shown to be proud of his own pirate flag and Jolly Roger during his arrival on Jaya Island, and unforgiving of anyone who defame it. For disgracing his flag, he was eager to order Sarkies to savagely harm Bellamy.

Doflamingo, like the majority of the villains in One Piece, is a sadist who finds pleasure in other people’s suffering. He used to enjoy owning slaves and abusing and tormenting those around him because of his powers as a Celestial Dragon. Doflamingo, even as an adult, enjoys inflicting as much agony as he can,

such as forcing King Riku to murder his own subjects and then framing him as the perpetrator of the massacre. Doflamingo’s parasitic string ability allows him to force individuals to perform his bidding, including forcing Atmos to hack down and kill several of his own followers or pushing Mozambia and Stainless into a fight against their will.

Doflamingo has limited patience for anyone who he considers inferior or who annoys him. Doflamingo as a boy exacted vengeance on his father for forcing the entire family to leave Mary Geoise by murdering him in a fit of wrath. Despite this, he still holds contempt against his father for embarrassing him

and inducing him to lose his reputation as a Celestial Dragon. When he doesn’t get his way or when people deny him what he wants, such as when the Celestial Dragons refuse to take him back at Mary Geoise, he is show to feel animosity for them.

He is enrage at his father for depriving him of his birthright as a Celestial Dragon. Doflamingo’s hate became stronger when he was torture and subject to several difficulties from the citizens until he decided to kill his father, the man responsible for all of his suffering as a youngster,

and present his head to Mary Geoise for her attempt to reinstall him as a Celestial Dragon. Doflamingo insults his father as an adult and still has grudges against him for his decisions. Despite his hate, Homing has no apathy for Doflamingo and did not carry any ill thoughts towards him in his final moments.