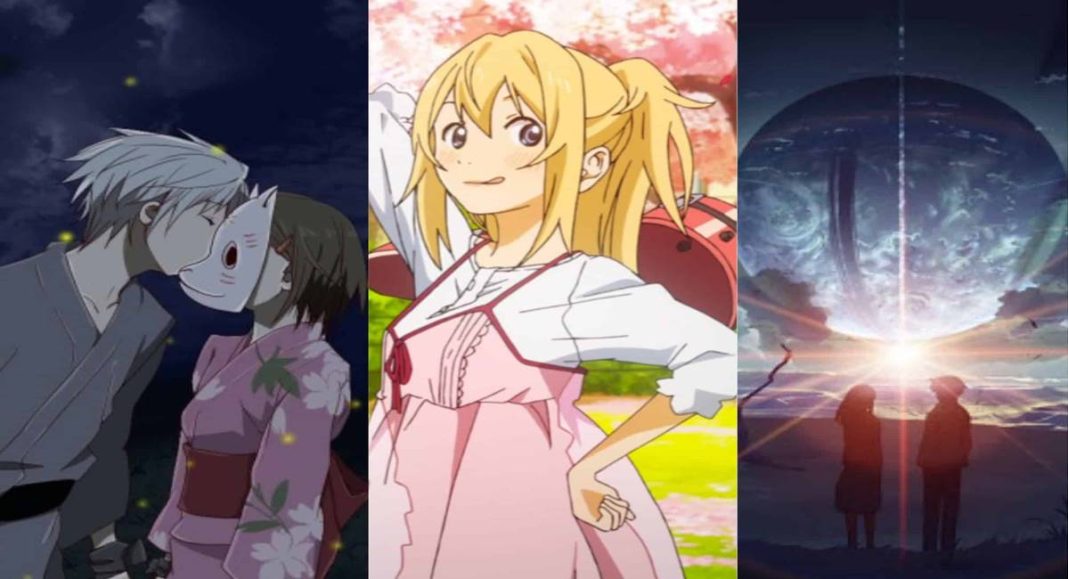 Emotional Anime: Hello friends, I hope you are doing great. We all love watching movies and they can be any genre, sometimes they are action, thriller or etc. Also, there are people who love to watch movies that make them Emotional and if are an anime Lover then You are in the right place because I am going to tell you the 9 best emotional Anime Movies which will make you emotional and also make you cry. So here are the movies:

1. I want to eat Your Pancreas (Emotional Anime Movie)

This is might be the most emotional movie on the list and that is why it tops the list. The story tells the story of a High School student named Haruki, who discovers that one of his classmates, a girl, named Sakura Yamauchi, is suffering from a terminal illness in which she was diagnosed with a fatal pancreatic disease that will take her life in a short span. This is one why this story is so emotional because the boy can’t do anything in it just watch her die in his hands.

2. The Garden Of Words

The story is about a 15 years boy named, Takao AKizuki, an aspiring shoemaker, and a 27 years old woman named, Yukari Yukino, they start meeting each other in the park. While Yukari never talked anything about herself, he shared all his life things with her. One day when they were in the park they got soaked due to heavy rain but Takao expressed his feelings towards her. She rejects him because he was too young. After many years the boy returns to the park and vows to find her.

Another Masterpiece Movie in this list, story is about a high school girl living in the rural town of Japan. She wishes to be born as a boy in her next life in Tokyo. And one day she unexpectedly exchanged her body with a boy living in Tokyo. The thing is that they can still connect with each other through messages and through their body parts. The Movie depicts that what you wish is not always good for you.

The Story is About the Boy, Who is about to kill himself due to his depression. But suddenly he gets a flashback of the things that happened with him and a girl he knew. In the past when he was studying in elementary school, he bullied a Deaf girl and got detained by the teacher for this. He hated her and they got in separate schools. But Later when he grows up, he tries to find the girl and wants to apologize. The movie is also good since they create a love story without any words being spoken.

The story revolves around the things that define human behavior. This is about Two friends named Takaki and Akari who are in elementary school and who became friends over time and their friendship turns into more than that. But later that is put to a test when the Akari has to move away from the city leaving Takaki behind. The story depicts how the human life is like Petal of Cherry blossoms that fall, just like how the life of a human falls. The story is quite good since it tells the real meaning of friendship.

A story that is related to how emotions can control someone’s ability to manipulate things. As the name suggests the story is about the girl who gets an unbelievable power to control the rain of the place. Like she can control the rain of any place she visits. She befriends a High schoolboy who ran away from a rural home to Tokyo. They decide to work together and help people who want to clear the rainy weather. But a surprise waits for the, which you should check in the movie yourselves.

The story is quite emotional which shows the relationship between parents and children. The story is about the girl Named Hana, who falls in love with A wolf Man and eventually they fall in love, later end up marrying, She gives birth to two beautiful children but the man dies, unfortunately. She moves to the countryside where she faces many problems. The story is about a mother who will do anything to protect her children from anything.

8. Maquia: when the promised Flower Blooms

The story is about the Girl who belongs to a special group of people who are known for their youthful longevity and peaceful lives. But the greed of people makes them run away from their homes, who believed that their blood will give them immortality. The people kill them all and force that girl to run away from her home leaving everything behind. Thus how she survives in the greedy world is the main thing that is show in the story.

This movie is a true masterpiece which shows that Life is very painful sometimes. The movie is quite old but the animation shown is very good as compared to that time when animation was just normal. The story tells the time when America Bombarded Japan during World War 2, story about two siblings, one of them named Seita, a teenage older brother who along with his younger sister Ayano are forced to leave their house. Then they find themselves surrounded by the greedy people who just want them and how they survive it. They rely on themselves and cannot trust anyone. But will they be able to find their parents again, you should watch the film.

So here were some good emotional movies you should watch. Hope You will enjoy them