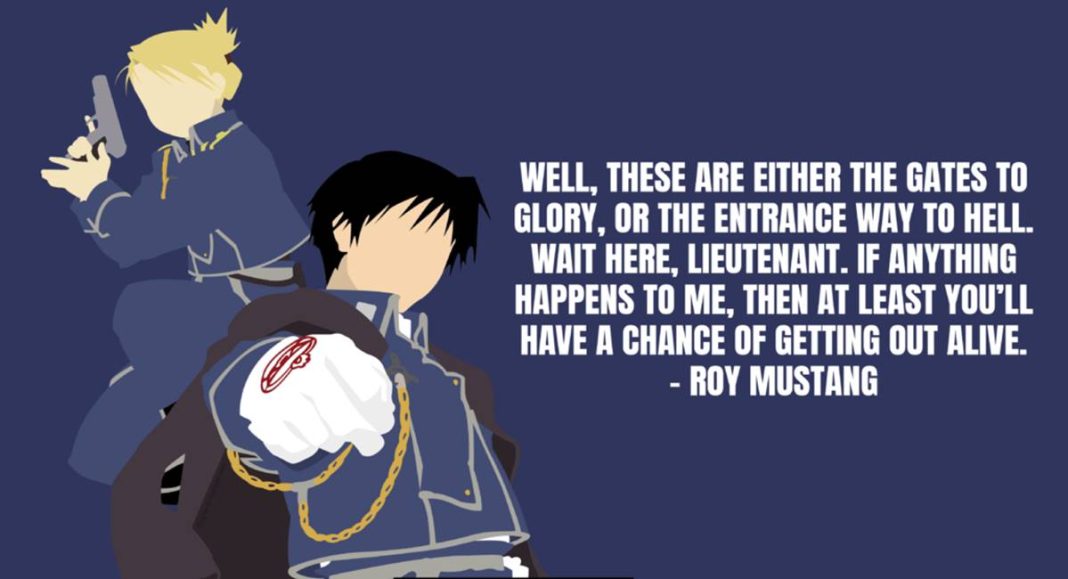 Occasionally providing comedic relief, Mustang was a dynamic and capable leader. In some of the best confrontations in the series, the Flame Alchemist participated as a superb fighter. That he consistently delivered strong dialogue is therefore not surprising. Check out 10 of Roy Mustang’s most fantastic Fullmetal Alchemist quotes below.

No one took General Hughes’ passing more personally than Roy Mustang, who did it with dignity. This was made in reference to the change in the ranks that followed Hughes’ passing. The remark acknowledges the fact that nobody truly appreciates their possessions until they are gone. For instance, when an artist passes away, sales of their album see an abnormal rise and they are given more accolades than they did when they were still living. He unexpectedly advances two ranks after a soldier dies. It’s absurdly funny, and Hughes would have laughed at it.

You, youngster, are making too many assumptions.

Mustang’s level-headed attitude is perfectly captured in this smart adage. It is inconsequential and simply causes more problems to try to carry too much at once or to worry about things that are out of your immediate control. Being practical and taking care of what can be handled right now would be the greatest advice. It works like a checklist where, rather than starting with the most difficult and time-consuming task, you tackle the minor challenges that can be overcome with reasonable care.

Nothing is flawless, and the world is not perfect, but it exists for us and is making an effort.

Roy had an amazing outlook on the world. In spite of its flaws, he saw the beauty hidden within, which was the most optimistic perspective. The challenges and tribulations you face can be conquered, and you can keep doing the best you can, just like the world. Life is not supposed to be a walk in the park all the time. Roy Mustang is the only person who could provide such a universal life lesson.

Try to anger your adversary if he has a choleric disposition

As readily as it can negate itself to become a colossal weakness, anger can also result in a harrowing surge of strength and adrenaline. You can gain the upper hand by making your adversary’s negative mood worse. Anyone with a clear mind can benefit from the fact that common sense is lost when someone is in a fit of rage.

Roy Mustang, who was the most cool-headed and composed anime character imaginable, was the ideal person to say these wise words. That he knew himself as well as his opponents is evidence that he was a formidable opponent.

“Loyalty is embodied by dogs. All else being equal, they obey the orders of their master!”

It was obvious that this was one of Mustang’s sporadic humorous relief scenes, but it was nonetheless a memorable sequence. He was also right; dogs are wonderful. They are hopelessly loyal, so yes, you can treat them badly (if you have no soul) and it won’t make a dent in their devotion. We will always salute you, loyal dog.

This was again another of Roy’s excellent observations—he was undoubtedly the king of smart observations. Every bit of love and care you give matters, no matter how small or unimportant you may feel that you are. Mustang always saw the future for good tucked within humanity and never lost sight of it, choosing to concentrate on it rather than turn to negativity.

“My pawn. My bishop. My rook. My knight.” (Fullmetal Alchemist Brotherhood Quotes)

This is a great proverb for someone who has experienced a run of poor luck but knows they can overcome it. You don’t have to giveup just because it seems like everything is stacked against you sometimes. Roy was a truly great side character because of his extraordinary resiliency and habit of having a backup plan. With his unending supply of confidence, he is undoubtedly someone you want on your squad.

Even if it may seem ironic, death itself does more to make us appreciate life. Thoughts of how fleeting our time on Earth actually is can sometimes cause us to lose sight of what really matters.

It is wise to remember to value life and all that it has to offer while you still have the chance, as Mustang wisely said. The fact that he regrettably took part in the Ishvalan War of Extermination and was responsible for the murder of several civilians made him the person who understood this better than anybody else.

You can call me Roy Mustang or Lieutenant Colonel

This quote has the perfect balance of intimidation and awesomeness. Being one of the coolest anime characters, Roy Mustang was at his most assured.

This phrase was said after he demonstrated his Flame Alchemist skills to a villain during the first season of the show. Even though it was only a little sample of the actual power of the Mustang, it made an impression. The memorable incident is still deserving of the odd re-watch for sentimental reasons.

Mustang aptly identified one of society’s most glaring problems with a statement that is still true today. Because of the herd mentality, people are so hostile to anyone who stands out and suggests a sensible change (or Twitter). The most undesirable events in history frequently occur again because of stagnation, which results in mindless compliance.