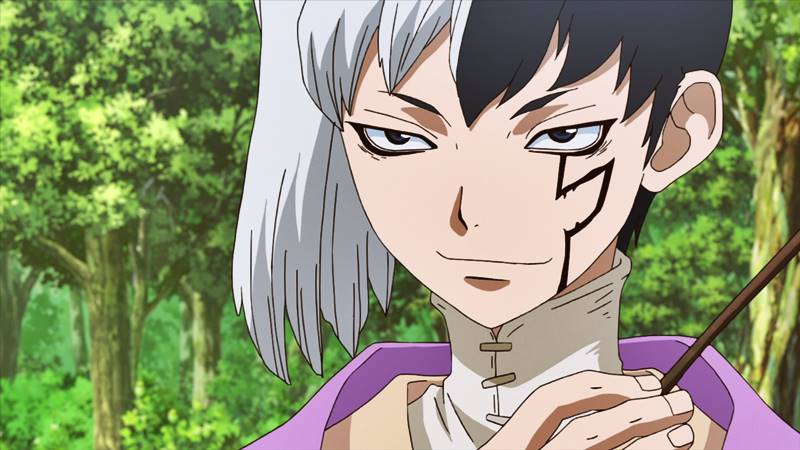 Gen Asagiri: Hi friends, today here we will see some facts about Gen Asagiri from Dr . Stone. Asagiri means mist or fog and Gen means illusions.  Asagiri Gen or Gen asagiri is a male Mentalist in this anime. He first appeared in chapter 12 of manga and Episode 5 of the Anime series. First, he was introduced as an enemy of Senku but later turned into his friend.

As of physical appearance he is, he is the same height as Senku. His hairs are one side white and another side black.  He has a petrification scar which is healed by the second depetrification. Gen Asagiri wears a coat over a yakuza and has no proper footwear. He also wears sack-like shoes, similar to senku original one

2. Gen Asagiri was the first enemy –

Gen Asagiri was the first enemy of the senku but later turned into his friend. He was depetrified by Tsukasa and sent to find senku. Gen Asagiri is also one of five wise Generals. He is a very strategic person and knows how to carry out missions. He faces enemies tactically.

he has pride in his techniques. Gen Asagiri is a master Mentalist/ phycologist and knows the human psyche. He stays calm inside even when visiting ishigami village. A paranoid who can hide multiple blood bags in his clothes in the way he attacked. He is also quirky sometimes. He tends to be selfly sorbed and perverted sometimes.

He is one of five general due to his ability to understand the human psyche and he can manipulate things lies in contrast to senku. Gen Asagiri promotes cooperation and enthusiasm and motivates each other. He shifts from acting ditzy airhead to a calm person.

5. Strong will and endurance –

He has strong will and endurance. Gen Asagiri is able to survive an attack from magama with proper preparation.  He can able to keep with Francois walking to the village.  While he has an aura of selfishness and hard self-interest and manipulation. He is capable of genuine kindness at one point.  He also states that his favorite drink is cola.

As a mental expert, he is perceptive and manipulative. He can understand any message and draw with his ability. He understood Kohaku message and the image that he represented. Being a skilled liar, he can fool anyone. When it comes after depetrified he can make anyone fool with his tricks. His favorite line is ” make your joker look like the ace of spades” which is very famous.

He basically believes in his 3 steps to manipulate anyone into working of anything.

A.  Stand with anyone by them not against them makes them feel adverse

B. He gives relevant information about any conversation.

C.order anyone to do the opposite of what has to be done.  These techniques are seen he goads kinro and ginro into helping senku power up.

He is a master of hand-to-hand magic he has various things kept in his coat that help him in adverse conditions and distracts the person so he can have more time. He also helps with village problems.

whenever needed he can also disguise himself as female with a female voice. He also mimics anyone’s voice to the point of being the same as the person. He has proficiency in both English and Japanese. Gen Asagiri was able to speak to anyone without any problem. He understood what Stanley and Dr. Xeno said without any problem.

Gen known as a Mentalist since he has been recreated always keeps a paper deck of cards made for him specially. It has 52 cards in an addition to three jokers. The jokers have phrases on it. He also knows tarot cards. Gen Asagiri also has a poster of his on a Psychology book called ” Magic Psychology”. He got petrified while posing on a box full of swords he escaped during a performance.

Gen ranked 3rd in the first and second character poll and placed 1st in the 3rd character popularity poll. Gens hair seems to be permanent after no progress has been shown. He also uses flips of words like yabe to beya and muri to rimu. He is always on the winning side. Though he is easily swayed away by senku.

So these are some facts regarding Gen, mentalist hope u liked it.