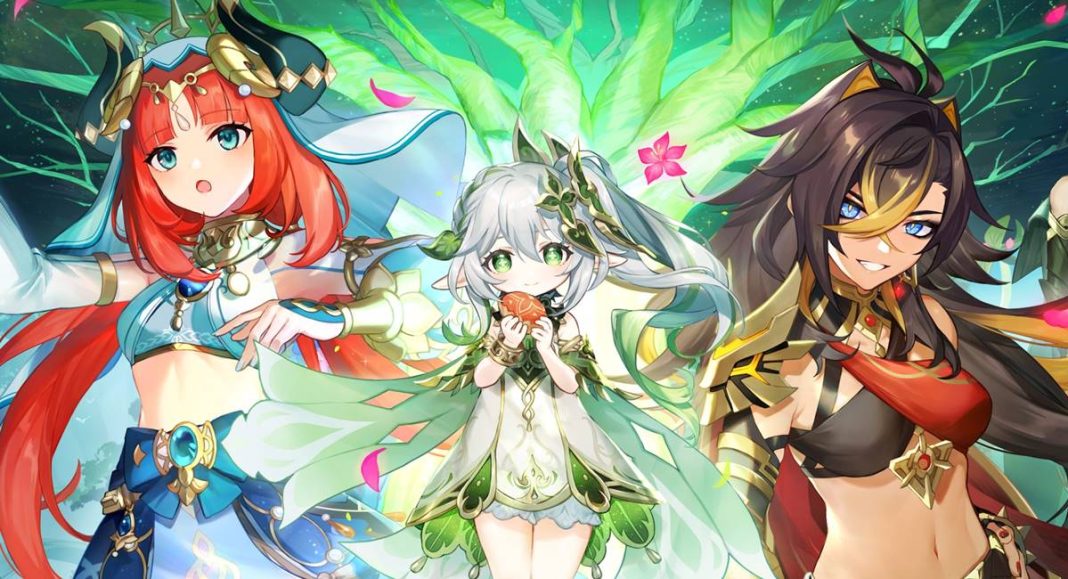 Genshin Impact 3.0 Update: We will shortly be able to enter the Dendro Archon’s forest realm thanks to the next Genshin Impact 3.0 update. It has taken a while, but it is finally here. The overall narrative of Genshin about gods and mortals not knowing how to get along continues with the next chapter now.

Three new characters, Tighnari, Collei, and Dori—the first two of whom are Genshin’s first Dendro figures—along with the new, beautiful, flower-filled area are also introduced. The great announcement is that everyone will be capable of giving Dendro a chance because Collei will be unbound in the upcoming Graven Innocence event.

A substantial dose of material that all gamers were looking forward to is also included, along with new events, major bosses, region weaponry, and relics. I’ll cover all the new features that are coming with Sumeru in my Genshin Impact 3.0 guide, along with when you can expect to play it for yourself.

The August 24 release date for Genshin Impact 3.0. As usual, a lengthy maintenance window during which players will get Primogem compensation will precede the release of the upgrade.

A: Tighnari: This five-star fox lad is a Dendro archer who excels in using arrows that break into several missiles that attack opponents. He oversees the Avidya forest rangers, of which Collei is a member, and serves as a forest watcher as well. Genshin Impact 3.0’s initial phase will launch on August 24 and include Tighnari’s banner.

B: Collei: This four-star ranger-in-training is somewhat similar to Amber in a number of respects, including the usage of a bow, a preference for gliding, and the presence of a teddy mascot in her burst. Given that they grew close in the manga adaptation of the Genshin Impact prequel, it is not entirely unexpected. In the Graven Innocence event, Collei will be available for no cost, or you can purchase her as a four-star boosted character from Tighnari or Zhongli’s banners.

C: Dori: Using a claymore and a genie, this four-star Electro merchant is Dori. Her genie may tie a tether to the current character to heal them and restore energy, which is a useful power as she primarily serves as a support character. In Genshin Impact 3.0’s second phase, you can wish on Ganyu’s or Kokomi’s banners to receive Dori as a boosted four-star. Around September 14 is when this should occur.

Genshin Impact 3.0 will also feature the Shield-master Zhongli, Hydro-healer Kokomi, and Cryo DPS Ganyu in repeat episodes, with Zhongli appearing in the first phase and Kokomi and Ganyu in the second.

Through NPC speech and the livestreams for the next edition, the new Genshin Impact region of Sumeru has been teased for a considerable amount of time. The Dendro Archon, also known as the god of flowers and greenery, has his home in Sumeru. As a result, the area is covered in lush rainforests, and Sumeru City was even carved out of a massive tree. The Akademiya, Sumeru’s governing class of scholars who rigidly regulate knowledge as a resource via the Akasha Terminals, are likewise based in the city.

In addition to the main city, Port Ormos serves as Sumeru’s commercial hub and is where Dori resides. In addition, there is the Avidya rainforest with its spirits, a desert full of ruins, and a huge overgrown robot. However, much like with Inazuma, we might not initially get to see all of these things. Since the new Archon quest for Sumeru is scheduled to last for a few iterations, miHoYo might progressively broaden the territory to include more.

The Dendro element is fully introduced in Sumeru as well. Dendro is receiving characters like Tighnari and Collei in addition to the completely developed new elemental reactions: Burning, Bloom, and Catalyze, despite the fact that they already existed in the game. You can utilise Electro, Hydro, and Pyro to alter the condition of some things in the area, just like in Inazuma’s puzzles.

The lovely woodlands of Sumeru are being destroyed by “the withering,” and there are a lot of events in addition to the new Archon quest centred on Lesser Lord Kusanali.

We’ll be looking for ideas all throughout Sumeru in Graven Innocence to help Collei come up with concepts for a toy store in Port Ormos. By simply completing the tutorial quest, you can obtain Collei for nothing, which is the main benefit of this event.

The following event, Tablet Analytics, asks players to use their buffs in combat challenges to aid an alchemist in his research into “remelting tablets” in order to receive rewards. The Seelie companions are returning in Lost Riches as well, and just like with Inazuma, you can find your very own Dendro Seelie by looking for hidden treasure.

The reappearance of Ley Line Overflow, which is most likely near the end of the version, allows players to receive double drops of Mora or EXP materials from Ley Lines of Wealth or Wisdom.

In the new Sumeru region, there are two fresh bosses:

A: The impressively named Jadeplume Terrorshroom, who is similar to a fungus horse-dog-ostrich beast, is the major new boss for Sumeru. This boss will have a “Activated” anger state, but you may reportedly change it by dealing Burning damage with Pyro, which will cause it to scatter spores throughout the arena.

B: We haven’t seen a new Regisvine for a while, but this new Electro variation differs from its Pyro and Cryo brethren in a few key ways. If waxing and waning stamens are produced simultaneously, a large electro explosion will result.