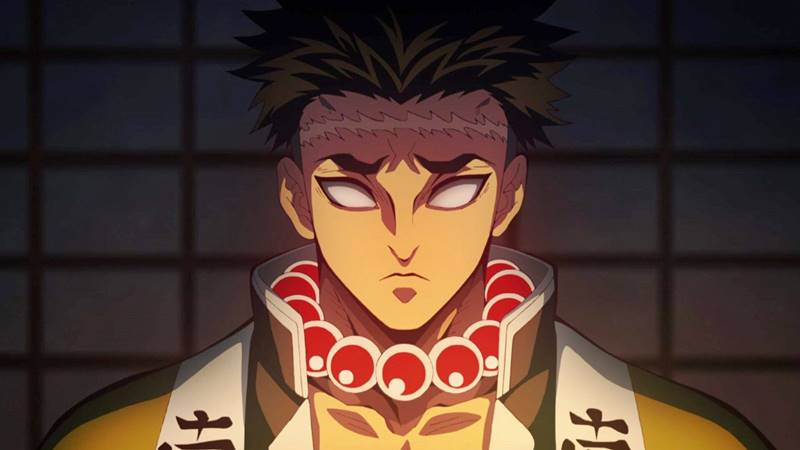 Gyomei Himejima: Hello guys how are you all? This blog is about The strongest Hashira Gyomei Himejima. He is one of the supporting characters in the Anime Series Demon slayer. He is the Strongest fighter in The demon slayer corps. Gyomei is the stone hashira currently. He is the master of many of the person one of them is Genya Shinazugawa. His fighting style is very versatile.

Gyomei is the strongest hashira as shown in the manga. He is strongly built and has a huge bulking body. He is the tallest person in the series as seen from the anime. Gyomei has a scar on his forehead showing how he has gone through many torchers. He has spike black hair with a good personality. His eyes are always running as he is blind from his childhood. He is an emotional person also. He wears a normal demon slayer uniform with green haori. Gyomei also carries large beaded necklaces around his hands which are usually joined together in form of ” Namastey”.

2. Giant body but a soft heart

Though having the body of hulk, he has a personality that is soft-hearted. He is soft-spoken besides having a large strong body Which can easily scare away anyone. Many times he has seen speaking for the people who are weaker than him. One such incidents is that when Tanjiro was presented in front of hashira and everyone was torchering Tanjiro and Nezuko. He was the one who took pity on them and asked everyone to listen and help Tanjiro, which shows that his humanity is always greater than anyone.

he is very helpful in nature but he also keeps a suspectful behavior to others. Gyomei also has great experience as a Demon slayer. But also before becoming a demon Slayer he was the same as this, like keeping suspicious and keeping an eye on the people around him. He says that people around you tell more about a situation instead of what others say. Because of this doubtful nature he doesn’t completely accept and trust others easily. But once he believes in them he protects them till the end.

Gyomei is the only hashira who is blind. It has been shown that he lacks pupils of eyes. While the whole reason behind him being blind is not explained correctly in the anime. He became blind when he was a child due to a fever which is unknown shows that he wasn’t born a blind person. Though being a blind person doesn’t hinder his ability to fight. He can fight even better than people who are more capable of him. He shows no fear while dealing with an enemy.

In the manga it was shown that he is an orphan but it is not true whole. It is also shown that his father died due to an unknown disease and while his mother dies while giving birth to him. He was later blinded by an unknown fever. But in spite of his no sight, he was also able to sense things around him. He can easily sense people around him doing anything to him like mocking him or trying to hurt him. He easily dodges them that make people around him suspect him saying that no blind person can do things like that and he is faking it.

As an orphan, he lived in an Orphanage with nine other orphan children. He was the eldest so he raised them like a big brother. Though being blind he raised them well and children also followed his orders. He raised them in a temple. The area in which they live was haunt by Demons who attack people regularly. He always said that he will protect them no matter what happens. He also protected them when a Demon attacked the temple kids.

One day when the temple was attack by Demon, he killed four kids immediately, and the remaining didn’t follow Gyomei instructions and went outside of temple only to be kill one by one by the demon. Children didn’t trust him as he was blind and ultimately they got kill by the demon. Only one youngest child followed him and he was save by Gyomei. Gyomei then also fought the demon and killed the demon mercilessly in front of that child till the sunshine. But the child in got frightene by Gyom and said to people that Gyomei is a demon. People misunderstood him and imprisoned him. But Kagaya ubuyashiki intervened and saved him. He took Gyomei with himself and trained him to become an hashira. He then became a Demon slayer and after two months became a hashira.

8. Connection with One of the Demon moons

Gyomei lived with orphans whom he helped and raised like a mother. Children also followed him and his orders because he was the eldest. One of the children Name Kaigaku ( after becoming a demon) who got orphans kill by a demon later became a demon himself and also became Upper Rank six. Thus they were personally known to each other. He said to the demon that he can kill and eat all the children who are living in the temple there. Demons then killed all the children and also turned him into a demon.

He is one of the hashira who uses Nichirin made Axes specifically made for him. But that doesn’t mean he doesn’t use a sword. The axe attached to a frail is connecte to a long chain. He uses chain sounds to compensate for his blindness and uses the motion of the axe. The axes are said to be even superior to swords made during the Sengoku period when making swords were at their peak. Even rank one Kokushibo could not cut through it and resorted to close fight.” Destroy demons” is carve on the axe.

Being a hashira of the top level. He is one of the rarest hashiras who uses stone breathing as a fighting technique. This makes him one of the strongest and skilled hashira and swordmen. He basically has many techniques and masters all of them which is rarely seen. His axe has a special technique to manipulate the things around him. Some techniques like serpentine Bipolar, upper smash, stone skin, and volcanic rock, etc. This makes him aggressive and unpredictable against enemies.