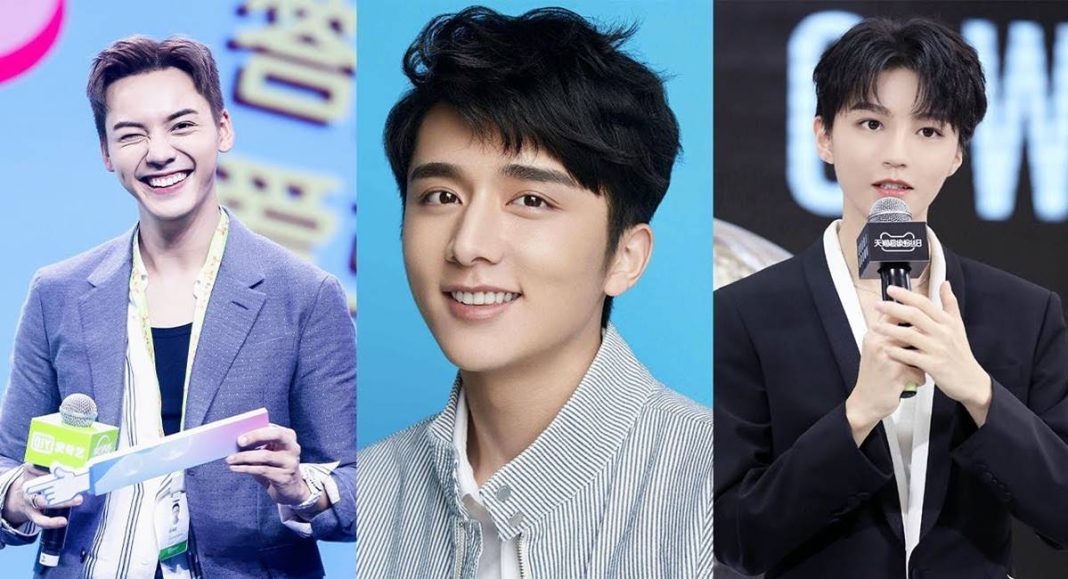 Handsome Male: Chinese performers can easily demonstrate that they are among the greatest in the entertainment and fashion industries. The world of C-Drama is brimming with industry legends and up-and-comers who can demonstrate that they deserve our attention with their filmographies. If there is a thing as a fashion report card, you can bet that the same actors you’ve been watching on your screens are doing just as well in the fashion sector as they are in their C-Dramas. In this article, let’s see the C drama with the handsome male lead.

Feng Teng, the boss of a large company, has a younger sister who requires a blood transfusion due to a rare blood type. He locates Xue Shan Shan, a coworker, and requests a blood donation from her. After that, Shan Shan’s brother and sister are indebted to her, but instead of paying her off the way Feng Teng usually does, his sister proposes sending her nutritious packed lunches to help her retrieve from the blood loss and to make the thank you more personal. Shan Shan enjoys eating, and her enthusiasm for lunches, as well as her general bright and happy demeanour, begin to soften Feng Teng’s heart.

A lovely love story that brings together a diverse cast of characters, including a tyrannical CEO, a kind heroine, a workplace beauty, and many others. Due to her father’s rigorous upbringing, Shuang Shuang has become a little rebellious. She meets Qi Xun, an extremely talented, chilly, and overly sensitive young man with outstanding powers, after fleeing from home. “This emotion of like someone will remain dazzle through the eyes even if you cover your mouth since the world lights up when you see the one you like,” says one saying.

A narrative about first loves and relationships told through the eyes of three couples at work. It follows a strong-willed young woman with a lot of talent who meets a boss with a black belly. Xing Yun is hired by Xia Ke to work at his gaming company since her name has a positive connotation. He’s an ambitious and headstrong son who refused to take over the family business and instead went out on his own to make it. In dealing with her black-bellied boss, she goes through various extremes and crosses numerous hurdles on her way from a sketch artist to a gaming designer. Their incessant bickering pushes them closer together, and the girl who has never experienced love learns that love is the final hurdle.

This is a story of everlasting love. Even a harsh breakup cannot change this young and naive yet genuine love. They’ve been trying for a decade and yet haven’t been able to heal their broken hearts. Despite the fact that they have made new friends, they are still unable to fill the void in their hearts. Who will be the first to make an attempt to entice the other back? Men and women’s love is akin to a battle. You’ll yield with just a kiss, a smile, or a confession. He did, however, announce his marriage to another woman right away. Is this a case of love or vengeance? She vanished without saying anything ten years ago. Is he seeking vengeance because this has caused him so much anguish over the years?

Gu Cheng Ze, the Gu family’s adopted son, is the CEO of Gu Mall Corporation. Mrs. Gu wants her biological grandson, Gu Jin Yu, to inherit the business, and Gu Cheng Ze is tasked with guiding the legitimate heir toward becoming a respectable businessman. He meets fashion designer Li Yan Shu during this period and learns that she is Gu Jin Yu’s ex-girlfriend. Gu Jin Yu, who still has affections for Li Yan Shu, is hired by him to motivate him. Gu Jin Yu chooses to join the company and pursue her, so the plan works. Mrs. Gu is furious when she learns of Gu Jin Yu’s emotions for Li Yan Shu and orders Gu Cheng Ze to separate the two.

5. About is Love (Handsome Male)

A love story about a corporate president who suffers a severe case of OCD that prevents him from interrelating with women and the one woman to whom he is immune. Wei Qing’s life is severely impacted by an incident that occurred when he was eighteen years old. Despite his success as a high-ranking business executive, he is unable to socialize with people of the other gender, which is why he has spent years looking for a ‘princess’ who can save him. Wei Qing realizes that ten years later, following a drunken encounter with an eighteen-year-old art student called Zhou Shi, he feels fully fine. An understanding is reached between the two, and a relationship develops.

Li Zhi Cheng is a former soldier who was tasked with taking over his family’s business when it began to falter. He had a fateful meeting with Lin Qian, a self-sufficient and skilled white-collar worker who had recently graduated and was having trouble launching her own firm. Nobody in the industry had high hopes for Li Zhi Cheng,

The Endless Love tells the story of a gifted painter who is a young man. He does, however, have color blindness as a result of a traumatic event. He met a gorgeous girl who helps him recover his emotional wounds and fight for his dreams at this difficult period in his life. This drama isn’t especially serious, but if you’re looking for a fun, light watch with appealing characters, The Endless Love is exactly what you’re looking for!

2. A Love So Beautiful

The plot of A Love So Beautiful revolves around a group of high school pals. The “ideal” guy, who is known for his excellent looks and great grades, appeals to a cheery (but not particularly book-smart) female. The show focuses on their high school experiences, such as escapades with their classmates and so on. This C Drama is not to be missed if you enjoy lovely, straightforward stories. A Love So Beautiful is a sweet and light drama set primarily in high school, however, it does the transition to adulthood later.

Ashes of Love is a romantic drama that is considered one of the best. Jin mi is the central character in the story. She is the daughter of the Flower Goddess. The mother passes away shortly after giving birth to her newborn daughter. It is based on the novel Heavy Sweetness, Ash-like Frost by Dian Xian. Jin mi is played by Yang Zi. Jin mi is drawn to Xufeng, the Heavenly Emperor’s son, played by Deng Lun. Despite the fact that they share a destiny, the powers of nature conspire to keep them apart. To find out if the characters in Ashes of Love receive their happy ending, watch the movie. Love ashes is a dramatic love story that will have you completely engrossed.