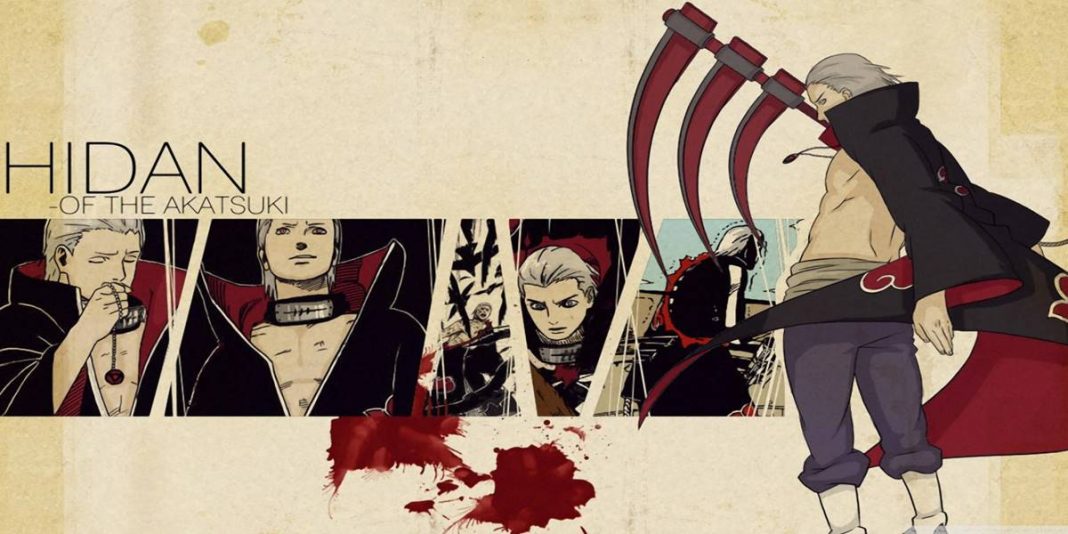 Hidan is a missing-nin of the S rank that defected from Yugakure and later joined the Akatsuki. Despite their mutual hate for each other, he was partnered with Kakuzu there. At the moment of Tobi’s entrance, he was also the second newest member of Akatsuki. Hidan and Kakuzu were jokingly dubbed the Zombie Combo by Kisame Hoshigaki.

Hidan went in search of the Valley of Hell as a child after hearing rumors about it. The aroma of sulfur revolted him, and he discovered bodies all throughout the region. They weren’t surprised that the Chinoike Clan couldn’t survive in the valley after returning and telling others about the dead, causing Hidan to correct their preconceptions and remind them that the bodies weren’t skeletons but actual bodies with their blood not dry.

Have a look at the 10 most interesting facts about Hidan of Akatsuki.

Hidan obtained an immortality method after he continued to devote himself to Jashin and continue to provide human sacrifices. Even though his body had been ripped apart, he couldn’t die. Unfortunately, he is not immune to hunger or malnutrition. Hidan’s collaboration with Kakuzu was mostly motivated by his inability to die. Kakuzu didn’t need to locate new companions following his fury outbursts because he couldn’t murder him.

Despite the fact that they despised working together, this advantage made them the perfect team. Kakuzu took advantage of Hidan’s immortality, allowing him to use his destructive techniques to their full potential without fear of harming him (as shown in their combo, which involved him using severe strikes to distract an opponent, while one of Kakuzu’s hearts employed Wind Release: Pressure Damage on both targets).

The cursor, despite its efficiency, He uses his weapon to try to obtain an opponent’s blood, which he then consumes and writes the Jashin symbol on the ground. This mechanism “links” his body to that of his opponent. Hidan takes on a Grim Reaper-like appearance once the link is established, with black skin and white bone-like marks. He is effectively a live voodoo doll for his opponent in this state, and any damage is done to him also affected the opponent.

He impaled himself through the heart, murdering his opponent in the process, and then relishing it in extreme satisfaction once he was done toying with them. Despite its effectiveness, the curse has a long list of conditions and is a time-consuming procedure to use. If the opponent understands what to look for and is aware of Hidan’s incapacity to die, the curse can be averted. If Hidan was take from the symbol, the bond between Hidan’s curse and his opponent may be dissolve prematurely; Hidan, on the other hand, would remain transformed, allowing the curse to be readily re-establish by merely entering the symbol’s borders again.

Kisame coined the term “Duo Zombie” or “Zombie Pair” in other media after observing Hidan and Kakuzu using a similar technique. Both ninjas have strategies for achieving immortality. Hidan and Kakuzu, ironically, despise each other.

He was adamant about not sacrificing Kakuzu for Jashin since he disliked him and believe that Kakuzu lacke the honor of being save by Jashin. Kakuzu, on the other side, really wanted to kill Hidan but couldn’t because he, too, is immortal.

Hidan is consider the only member of the Akatsuki who has never met Naruto. He was led into the Nara forest by Shikamaru before meeting Naruto (when Naruto arrived to help Kakashi defeat Kakuzu). Hidan was defeated and resurrected from the ashes.

5. Why Hidan Decided to Join Akatsuki

Yugakure hired Akatsuki to kill Hidan out of desperation. Hidan, on the other hand, was recruite into the organization by Konan. He initially declined the offer because he wished to promote Jashin, but after seeing Kakuzu’s immortality method, he changed his mind.

6. Hidan Foreman of the Jashin Cult

Hidan joined the Jashin cult after slaughtering his village. He obtained his abilities from this cult. He had little faith in the god of the same name and was adamant about spreading the teachings. His strategy includes wreaking havoc on the planet and killing mercilessly.

Unlike the majority of Akatsuki members, who were raise in large villages, Pain and Hidan were born in tiny towns. Yugakure was originally a ninja-infested town. Then it became a tourist attraction. Hidan was enrage at the change and refuse to accept it. He believed that the village’s useless ninja deserved to die and that he should thereafter massacre his neighbors.

8. Hidan Was Supposed To Resemble A Shinigami

In Naruto Hiden: Sha no Sho Character Official Data Book, Hidan was said to resemble a Shinigami. The Hidan’s black and white Jashinist markings were suppose to make him look like a shinigami, or god of death, according to Kishimoto. You might have predicted that if you’re familiar with shinigami. But here’s something you wouldn’t have guessed: Hidan’s scythe was plan to have various special qualities that Kishimoto wasn’t able to illustrate due to time constraints. Unfortunately, we don’t know what they are; perhaps Kishimoto will provide the specifics one day.

Hidan enjoys spare ribs but despises vegetables in general. He also despises dedication food, a Buddhist monks’ specific diet. The fact that he has this predilection suggests that he has come into contact with Buddhism at some point in his life.

Because anything other than destruction is a sin, Jashin-sama orders me to sacrifice. I won’t dare to stop sacrificing because that is what makes me immortal, even if I do goof off a lot. Even though I initially joined because I was use to being a masochist, I discovere that Jashin is the ONLY god to be worshippe and that those who do not comprehen the anguish of others will be punishe by the gods! (Deity, presuming he believes in more than one god, but Jashin appears to be the most powerful)