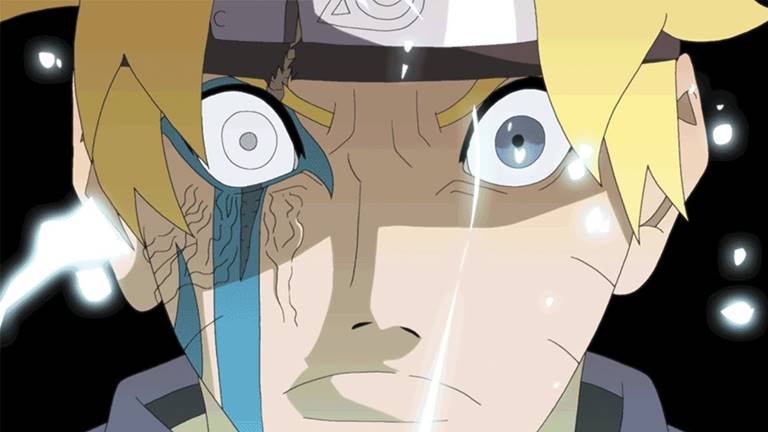 As Borutos manga continues the original Naruto franchise with a quick display of the heavily devastate Konoha (hidden leaf village). And the Boruto was about to Battle Kawaki. they are left with lots of questions here. Like what the hell happened to Konoha (hidden leaf village) and everyone respectively Another thing we notice is that Boruto had a Byakugan which seemes to be implanted on his right scarre eye. Not much has been shown about this Kawaki guy but Boruto comment seeme to describe him as much stronger Himawari who was Naruto and Hinata daughter, and was not born with Byakugan even though her mother was a hyuga. display a trait that Naruto descendants possess the ability to awaken their Byakugan In Himawari case it was awakened due to the anger she had when Boruto mistakenly ripped her teddy head. Himawari showed the great anger and the power she had as she knocked out her father out in just one blow. This Just testifies the power that a product of Hyuga (Hamura descendants) and Uzumaki (Hagoromo descendants) brings out. But yet Boruto had never been the shown awakening his Byakugan or maybe he is yet to. Though in Boruto the movie Himawari’s was not shown with her Byakugan but since she awakene it, it is reasonable to think that she can activate and deactivate it her own will.To skip back to the recents monthly manga the writer used a style where he first introduce the after math of Konoha (hidden leaf village) destruction. This was just to invoke question to the readers. and then afterward head back to where everything begin. With the intention of telling the whole story. This could mean that this manga will not the run for long if the one first shown is to be the final battle. The conversation between Kawaki and Boruto raises even more question. like what happened to Naruto, Hinata,Sasuke etc. are they still alive?

If we talk about a the big possibility how Boruto got his byakugan eye it’s definitely his mother Hinata because she is a mother and became one of the finest medical ninja next to the Sakura so taking just an eye or two (like what happened to Shisui Uchiha both his eyes are gone and still alive) is easy for Hinata to do just for the sake of her son.

Another one is we all know that Boruto has a blood of Hyuga someone must have attacked on his right eye and became blind and his eyes became white because of blindness for a while until his awaken when the heat of battle commenced, after all Hyuga Clan’s are originally has Byakugan (white eye) when awaken they gain a 360 degrees vision with one blind spot, but in Boruto case he is invincible that he doesn’t have blind spot unlike a normal Hyuga’s which means a second eye will be awaken when Boruto lose sight in the right eye and fused his ability with his Uzumaki’s bloodline Which I think makes more sense than the first one isn’t it? Or It’s neji’s byakugan. If we think about it,how could naruto loose to that kid? He and Sasuke managed to surpass Hagoromo with only a fraction of his power.After so many years, they became more powerful than before.Sasuke can control space and travel through dimensions naruto can destroy a village with only one little tailed beast bomb.Even if Kawaki comes with the otsusuki clan behind him, they are useless.The possiblity is that naruto and sasuke Uchiha were captured somehow by them and transported to the moon.That means the only hope is boruto. I don’t think that hinata gave him her byakugan. She powerful enough to handle the ninjas from the otsutsuki clan (she also has their chakra too,as we have seen in naruto movie the last). It would make more sense if boruto took neji’s eye.Even after death,the doujutsu is still working as we have seen with sharingan(itachi was dead and sasuke still transplant them into him to awaken so that mean’s the eyes still have power even after death). Maybe the hyuga clan’s has a storage where they keep the eyes of the deceased clan member and leade.That would be easier for boruto to come and take neji eye and have it transplant by a medical ninja (Hinata,Sakura) and he a woke that eye because of someone death(maybe konohamaru who is boruto’s sensei) or thinking about whether naruto is dead or alive(sarada is an example she a woke the sharingan just thinking about her father).