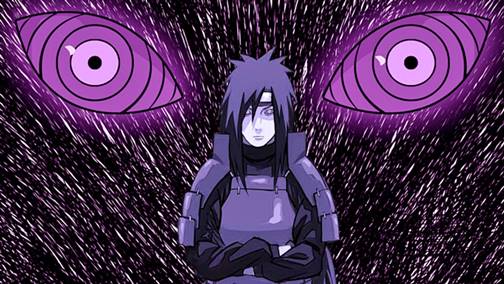 During Obito Uchiha Flashback it was revealed that Uchiha Madara was alive & needing Obito Uchiha to full fill his plan in exchange for saving Obito Uchiha. Uchiha Madara told Obito Uchiha that he used some DNA cell from Senju Hashirama that he obtaine during his last battle with him that cost him going to a hidden exile. he seemed to understand that as both Uchiha’s & Senju’s Descent came from The Sage of the six path then if both blood mix then the revival of the lost Rinnegan is possible. he prove this by fusing Hashirama DNA cell into him & manage to awaken Rinnegan shortly before he die. in order to successfully resurrect him in the future he managed to find a descendant of Uzumaki clan’s that known to be a distant relative to Senju clan’s. which means that that Uzumaki’s blood is as good as Senju. the DNA carrier that Uchiha Madara needed to go with his plan. then Uchiha Madara transplanted his eyes to, at that time, child Nagato Uzumaki & kept watching over him. as he feared his life about to end he pulled, at that time, the broken Obito Uchiha from war to continue watching Nagato Uzumaki.

when Uchiha Madara was resurrecte he also claim the same thing that he manage to awaken His Rinnegan due to Hashirama Senju DNA cell. further more thanks to Kabuto effort of fusing Hashirama senju DNA cell when performing Edo Tensei no Jutsu, the resurrect zombie body of Uchiha Madara also posses Hashirama’s ability. The only thing the eternal mangekyou sharingan {EMS} has over the Rinnegan is the Susanoo but the Susanoo is made of chakra Preta path just absorb it. Problem solve. The genjutsu that the sharingan has but again that can be deny by NOT looking at their in eyes, add into the fact that a rinnegan’s user can freaking crush someone with the gravity I really don’t understand how it can be beaten no physical attack’s really work on because the Asura path, no jutsu’s can be harm them, they can spam crazy summons, and shoots big *** chakra beam out of their body at people.now we must come back to our question, how did Madara Get the Rinnegan? Uchiha Madara could have simply asked Nagato Uzumaki to channel his chakra into some eyes and transform them into the Rinnegan {POOF} would Nagato Uzumaki do such a thing for Uchiha Madara, would he really hand him such awesome powers? well why wouldn’t he? we have to admit,Uchiah Madara is strangely interesting and incredibly persuasive. we all see how he transformed Sasuke Uchiha into a ruthless killer with just a few words when he simply told him to dispose of Karin. aside from that, Nagato Uzumaki had already agreed to use a jutsu on Madara’s behalf and he had already been in charge of sealing the Bijuu despite knowing of Uchiha Madara. it is certainly possible that Nagato changed some eyeballs into the Rinnegan. like wise, Uchiha Madara has recently revealed a whole laboratory of stored Sharingan, which is a certainly better candidate for changing into the Rinnegan. the Sharingan descends from the Rinnegan and contains some of its genetic traits and characteristic, thus being as compatible with the transforma just as a Mangekyou is compatible with another.

what if Nagato Uzumaki had not done this procedure for Uchiha Madara? what if he died before he could have done this just as he did before using a jutsu for Uchiha Madara? how would Uchiha Madara obtain the Rinnegan aside from robbing Nagato Uzumaki’s corpse? the answer is simple,Uchiha Madara used Zetsu to change a Sharingan into the Rinnegan. remember, Zetsu can clone anyone he touche, replicating right down to their chakra. Zetsu could have easily touched Nagato Uzumaki and there for can replicate a weaker clone of Nagato Uzumaki. however despite being weaker and temporary, the purpose is served as Zetsu has Nagato Uzumaki’s chakra in his data bank. therefore, Uchiha Madara can simply use Zetsu to change a Sharingan in his stock chakra to a Rinnegan by replicating and channeling Nagato Uzumaki chakra. it is interesting to note that Zetsu body is being shown just as Uchiah Madara restores his arm and brings the Rinnegan back into the story. if this does turn out to be in the case, or at least something close, it’s pretty ingeniou if you ask me.

this incident seem’s to have confused quite a bit for people, everyone is wondering how could an Uchiha’s transplant the Rinnegan when the Uchiha’s bear the Sharingan ? I guess not too many people remember that the elder son of Rikudou Sennin (sage of six paths) the first Uchiha’s, had the Rinnegan.

however, how did Uchiha Madara get his hands on the Rinnegan? did he rob Nagato corpse and plucked out his eyes, it wouldn’t that be impossible seeing how he can teleport anywhere in the world and he also has his assistant Zetsu, who can essentially travel through earth to track a corpse’s. I find it strange that Uchiha Madara did not mention anything about Nagato Uzumaki, the sole Rinnegan user, in the same sentence. which is why I’m biased to believe that Uchiha Madara, in fact, has a another Rinnegan at his disposal and it isn’t Nagato eye. so how could Uchiha Madara obtain another Rinnegan, after all, we know that the legendary doujutsu only appear during the times of strife or scientifically is seen as a genetic mutations. having more than one kind of degrade the former explanation of its origin.

So then why did each one of Pains bodies have the Rinnegan?

that’s brings us to the next point, how did Nagato Uzumaki produce more than one Rinnegan for his Pain Rikudou jutsu (sage of six paths) ? I believe that answer to that is the key for figuring out how Uchiha Madara could have gotten his hands on the Nagato Rinnegan. to begin I would like to list a few points of Nagato Uzumaki channeled chakra to each of the six paths of Pain through the chakra receiver’s each of the bodies had a Rinnegan and could utilize one doujutsu

we all know that the six bodie’s of Pain did not originally have the Rinnegan but were at one time ordinary individuals. there front none of the bodie’s were born with the there Rinnegan. however Nagato Uzumaki channeled his chakra through the all chakra receivers to each body and the state of his chakra determine the fighting abilitie’s of each body as well. I realize that Nagato Uzumaki sending his chakra to a body, simply transmuted or changed a regular eye into the Rinnegan. to explain we must first go back to think what Uchiha Madara stated, the elder son of Rikudou Sennin (sage of six paths), was born with his doujutsu and his chakra. notice how chakra and doujutsu are inseparable. to solve the mystery of the Rinnegan, we must think again use the Sharingan as a reference since it was at one time the Rinnegan. as we have seen with the Kakashi Hatake Syndrome, Kakashi Hatake cannot utilize the full potential of the Sharingan as he does not have that much chakra to do so while other Uchiha’s can do. although it was mentione that the reason was the Uchiha’s blood, we know from recent evidence that the Uchiha’s inherited the doujutsu of Rikudou Sennin (sage of six paths) as well as his chakra which is passed down genetically as well. so in Kakashi Hatake, we have an example of a doujutsu not having it’s compatible source of chakra, what if it was the other way around? Nagato Uzumaki, bearing the Rinnegan as well as its compatible sources of chakra could simply channel his chakra into an eyeball and turn it into the Rinnegan.