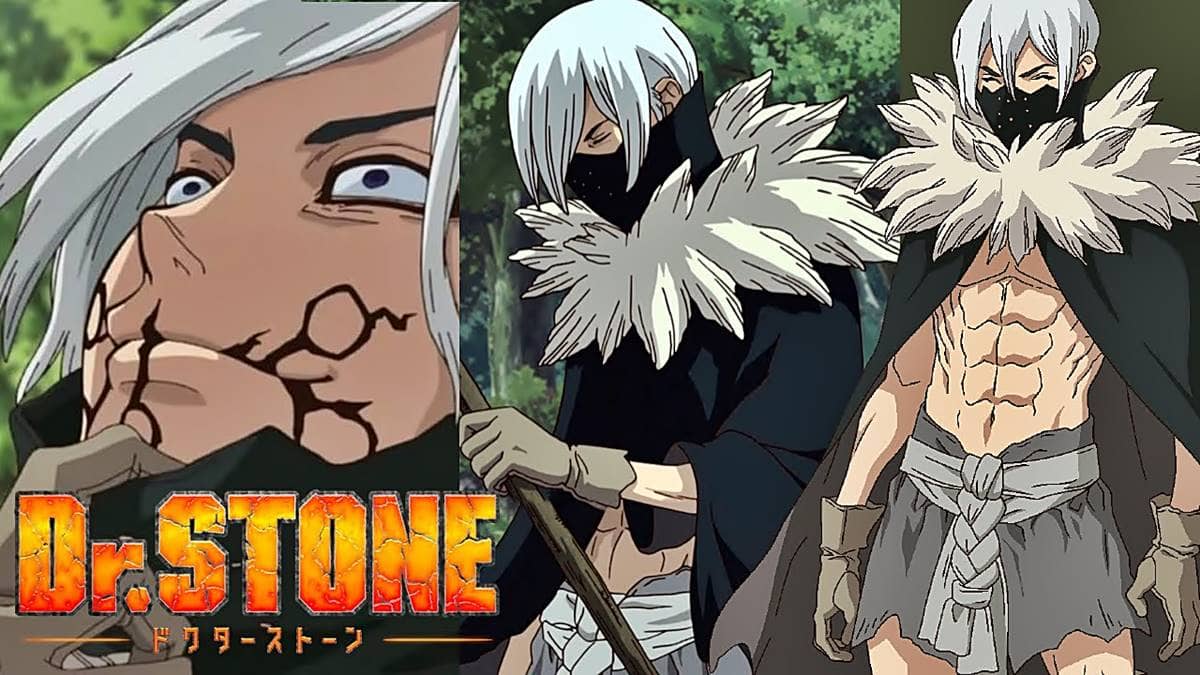 10 facts about HYOGA from Dr. Stone

HYOGA: Hello friends. In this blog, we will talk about one more interesting character from Dr. Stone which is Hyoga. He is a male character and made his Manga debut in Chapter 46 and Anime appearance in Episode 18… Initially, he was not introduced and no one actually looked at him that way. He is from the human race. His birthday is on November 30Th. His age is 20 yrs.

Well talking about his physical appearance his height is 189 cm and his hair color is white with a pair of blue-grey eyes colors. He is a fairly built man with short hair. He squints most of the time. His eyes are dangerous-looking and sharp. He wears a mask on his face which likely covers his lips and jaw part. He wears bird feathers around him. A pair of tan gloves and a black mask hides his petrification scar.

He is really a tough man. Hyoga has a toned body with six packs or maybe more. He prefers going shirtless but wears a long cloak covering the mid-section. As a lower part, he goes with a white skirt type thing with a belt around it. He wears a high angled boot pair. His scar healed upon his revival.

He is a survivor who was revived by Tsukasa Shishio. Initially an elite member of his empire. Hyoga betrayed him and attempts to take over his empire. He also threatens Senku into joining. Later he got defeated by both in the battle of the Kingdom of science.

When the situation arrives he is depetrified again and sent to battle but now within the hand with the Kingdom of Science. But since his third time depetrification his goals are not known. He provides great support to the group and shown no hostile. He is also ready to sacrifice himself for others.

He is easygoing. Even when situations are against him he stays calm. Even when betrayed by Gen in battle. He believes that only good person and a special mind people should live in the place. He wants senku and his team up and become both best duo. Hyoga is very observant some merciless and cruel when he kills Tsukasa sister as it will hinder him. He respects those who perform things properly.

He understands everything about Tsukasa forces. When senku disagrees to join him. He didn’t kill him rather offered him to join. Later he himself joins Senku rather than moz because he was untrue and doubtful. He has faith in science and senku. After his third petrification he is loyal member of science of kingdom. He even made bygones for Tsukasa.

He is one of the most important character of the story and strongest also he defeated many just after waking up Which shows he is very strong.  Physically he is able to take on Magama, Kohaku, and kinro; Best in Ishigami village until his weapon fell apart he stood there.  He is good at using his weapon “kudayari” ( a type of spear). It is a special boom that has a shaft pass through a hollow tube that allows the broom to be twisted. He also defeated several military agents of the Stanley unit.

Mentally He is a tactical genius who knows distracting anyone. He is also an analytical man who knows a stronger man. Hyoga also knows Moz is the strongest of petrification Kingdom. He also located corn and saved himself from the attack from Stanley Snyder. To avoid injury he used a piece of the boat as armor.

he is a spear master as known earlier he is using his kudayari spear he uses a style know as kan that allows him to strike faster than usual. Hyoga used these techniques to fight against the General against their metal swords.  He later defeated Moz using his skills and also acquired the kingdom.  In power, he is ten on ten while in speed he is slightly less but manages to do his best.

he is a very powerful person but lacks proper guidance. When he woke up he isn’t guided properly. If he was guided well he would have been the best fighting person in the series. He ranks 7th in the popularity poll done on the websites. His spear is said to be made of steel but, the shape is jagged due which his movements binder but he also manages them and comes out with an excellent strategy.