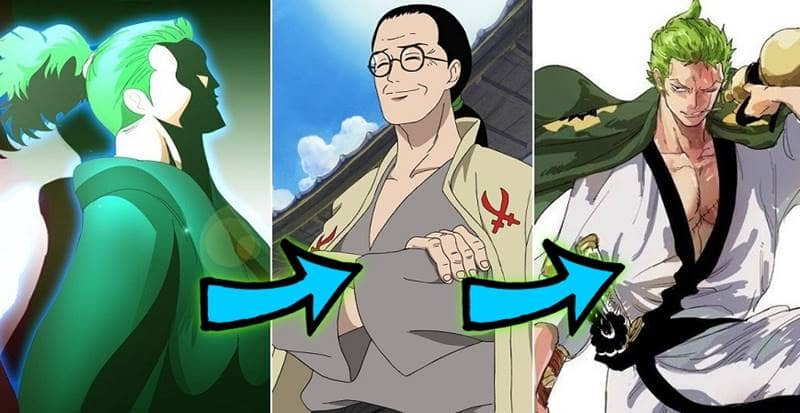 Shimotsuki Ryuma: Gyukimaru stated that Ryuma once slew a dragon above the flower capital. It was Ryuma who cut something big and saved the Wano country. Since One Piece is all about the intentional resemblance,

It is possible that Zoro can also do the same as Ryuma did to save the Country, As Zoro had sliced a mountain man once,

just like a normal person slices butter and Zoro also had cut a cliff without even his full control over enma, and this time it is certainly going to be on the next level.

Here are some facts that will prove my theory:

Originally Shimotsuki, also known as the Frozen Moon was the epithet given to Ryuma, the amazing “King” who master black blades.

His sensei was the skill swordsman Shimotsuki Koshiro and Zoro was beating 2001 times by Shimotsuki Kuina and that’s during that time that he learn the term “Sunacchi”.

When Kuina dies, Zoro was gift Wado Ichimonji, one of the 21 O Wazamono. This blade was forg by Shimotsuki Kozaburo. Then Zoro met Luffy, found his mentor Mihawk and got new blades,

including the Sandai Kitetsu who acknowledged him with a blade coming from Wano.

In Thriller Bark, he fought with the body of Shimotsuki Ryuma, the legendary Dragon Slayer (also born in November),

and was given the O Wazamono Shusui, Wano’s national treasure (literally translate as Autumn water). In Wano, Zoro saved Toko but failed to save her adoptive father, Shimotsuki Yasuie. Zoro was given Oden’s powerful Meito Enma,

forge by Shimotsuki Kozaburo, the only blade with Ame no Habakiri, that left a scar on Kaido.

There had been a persistent rumor around the languages, describing Kuina’s death. As you know, Kuina’s dad told Zoro that she fell down the stairs and died.

A few years ago, a rumor was start on Reddit that “falling down the stairs” is a common euphemism for committing suicide. The rumor grew strong enough to the point where it is commonly considere a fact in many Kuina relate conversations. However, outside of One Piece fandom,

I am unable to find any reference to this saying, related to suicide, in Japanese culture. Also, no Japanese-speaking fans have validated this slang. It seems to be most likely one of those many One Piece rumors that get accept as a fact.

So does anyone have any more info about “Falling stairs = Suicide” in Japan? Or is it just a Reddit rumor?

What do you guys think of Kuina’s death? Could it be a suicide? Did her father murder her? Or did she legitimately just fall down a flight of stairs and die?