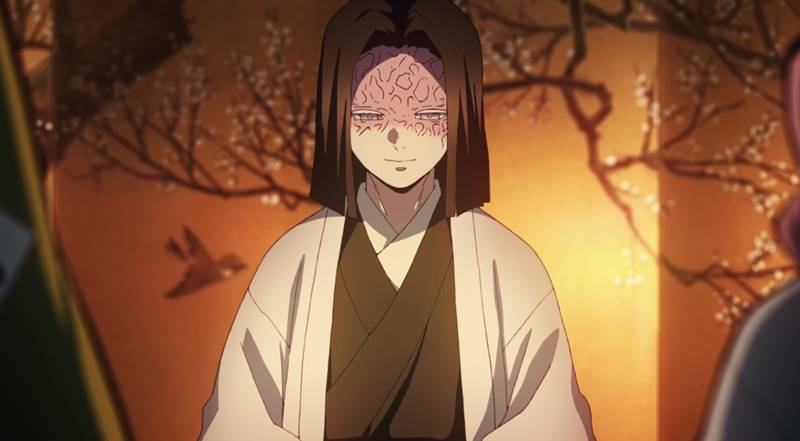 Kagaya: Hello, friends how are you all. This blog is about one of the major supporting actors of the anime series Demon slayer ( Kimetsu No Yaiba). He is the head of the Hashiras and also the head of the demon slayer corps. The Demon slayer corporation works under his direction and protects and helps people against any threat from demons. Therefore he is master and head of the plans of the slayer corps. He was unknown in the anime when he first appeared but looking at the respect hashiras gave him, he is no ordinary man. Here are some interesting facts about him, describing his abilities and life.

Kagaya ubuyashiki is the most respected and important person in the demon slayer. He is the leader of the demon slayer corps currently. He is the 97th leader of the corps. Demon slayers and their subordinates respect him a lot and address him as” Oyakata- same”. He is also the head of ubuyashiki family. Though being weak nowadays, he was once known as a very powerful person whom people feared and respected. Currently, he has become weak due to his sudden demon slayer mark and deteriorating health.

Kagaya is a tall man with very bright and light skin color. He has black hairs which came down to his shoulder. He was said to be famous for killing demons and got his demon slayer mark. Also, he has a curse mark on his forehead area which is slowly killing him to death. Due to his disease, he barely sees anything. His forehead skin is slowly deteriorating. He always keeps smiling like a god. Later his death is caused by this mark or disease. He wears a kimono over a white haori with a pink and purple pattern.

In the series, we can see Kagaya being weak and unable to walk properly. He has been possessed by a hereditary disease that starts from the forehead and goes into the whole body making it look like burned or slowly rotting. Due to this disease, he is unable to see anything as his forehead is almost in a bad condition. The disease slowly spreads to the whole body and the person dies. This is a hereditary disease that can not be controlled by him. Though this disease is killing him, he is still fighting it and doing leadership of demon slayer corps.

Muzan may be the most powerful demon but he shares a relationship with Kagaya. It is less known to people that the Muzan and Kagaya belong to the same Ubuyashiki family. Muzan when finally meeting Kagaya mocked him as Kagaya was unable to see anything. Kagaya asked his wife to describe Muzan. Muzan said that kagaya is already about to die and laughed at him saying you smell like a corpse. Muzan wants to be indestructible but also fears that he will finally die in hands of a human.

As a leader of the demon slayer corps, he is very calm and shows great care towards the members of the corps. He considers them as his children. He is possessed to have a very good memory. Though being weak and unable to become a Fighter he makes it up with his sheer mind and tactical knowledge on how to fight with demons. He guides the Demon slayer on their mission and assigns them to which mission to take and everyone follows his orders.

While he keeps himself in shadow most of the time. He also takes genuine advice and suggestions from his known person. Ine such a case where every hashira was against Tanjiro and Nezuko but Kagaya understood their condition after Sakonji Urokodaki sent him a letter. His manner of speaking is very good and shows his gentle behavior. His ability to calm anyone is seen when he controlled over-hyped Tokito and very arrogant Sanemi with only his speaking. But somehow he is strict when it comes to his children due to the curse mark of their families.

Kagaya became the leader of the demon slayer corps when he was young, he was maybe four years old. His family fought with demons as Muzan also belonged to ubuyashiki family. To make up for his bad deeds ubuyashiki family dedicated themselves to fighting against Muzan which led every member of the ubuyashiki family with a curse mark and they can only live with age up to 30 years. He met his wife Amane when he was 13 years old and she was 17. Priest selected her as Kagaya’s wife but Kagaya said if she wants she can leave him as her life will go in vain caring for a person with disabilities.

His wife is a normal person Amane was her name. Her elder daughter named Nichika ubuyashiki was a normal person without any superhuman abilities. She didn’t have any extraordinary powers like her father. Apart from his ability to speak and talking she has nothing special. Kagaya was succeeded by his son Kiriya ubuyashiki, he also has the curse mark now after his dad dies. Like his siblings, he is also the soft-spoken and soft-hearted person who cares for others.

After the death of Muzan and every Demon, the ubuyashiki family has finally fulfilled their duties as the head of the demon Slayer corps. Kagaya died and after that, his son has decided to disband the Demon slayer corps. It has been three months now and Kiriya has been shown saying that the whole purpose why the demon slayer corps has been created was to kill the demons. As there are no demons left now they are disbanding the slayer corps as their objectives have been completed.

Though being unable to see properly and walk. He can make it up by his voice which makes people ease up. His tone is so soothing that everyone just follow his orders. In addition to that ubuyashiki family has special foresight which helps them in avoiding disastrous situations. They possess this amazing technique that they can forecast about anything which comes to be true. He also forecasted that Muzan cant be killed only by beheading, he can only be killed with the power of the sun.