Home ANIME Kaguya Vs Jigen- Who is more powerful? 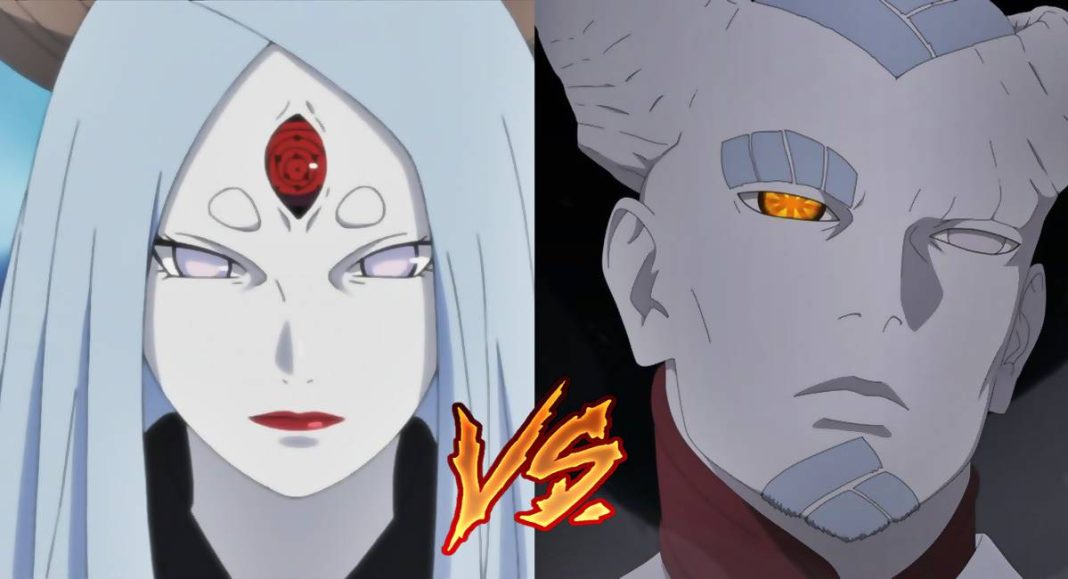 Long before the Hidden Village was formed, during the endless war era, Kaguya consumed the nuts of the gods and became the first chakra bearer on earth. After that, he joined the tree and became a tender. Kaguya was discovered by ancestral people who arrived on Earth, which they brought before Emperor Tenji. Kaguya identified herself as the Guardian of the Tree of God, erased her memory of her heavenly and earthly encounters, and then she settled among the people to be recognized as concubinage. She lived among humans and slowly built bonds with the planets she wanted to destroy.

Jigen is one of the antagonists in the Boruto series which appeared recently in the show and became the talk of the town as he is one who single-handedly defeated both Naruto and Sasuke which is why people are also comparing him with Kaguya. Jigen is the leader of Kara and one of the strongest antagonists to appear in Boruto: Naruto Next Generations to date.

Just like Boruto, he is also the vessel of isshiki Otsutsuki which is why he is so powerful, being the vessel of Issiki and also a Karma user he is surely one of the most dangerous characters in the show.

Who is more powerful

Jigen vs Kaguya is a topic that can be described only on the basis of their powers. Kaguya can be titled as the God of the shinobi who consumed the fruit of the gods and became the Ten-tailed JinChuriki which is why she is said to be the mother of the shinobi. On the other hand, Jigen is a member of the Otsutsuki clan who recently got his powers and user of the Karma.

Kaguya Otsutsuki teamed up with Isshiki when he came to Earth, suggesting that he has achieved almost the same level of results. He defeated Naruto and Sasuke fairly easily, but Zigen was exhausted after the fight and had already reached his limits.

Kaguya Otsutsuki, on the other hand, has been fighting children non-stop for months and shows how much her stamina is. Jigen is a little stronger than Kaguya, but I think he will win because he is easier to win in battle.

There are power levels that are different which can be seen from the fights they have fought til now. While Kaguya was the one who showed affection towards the earth and the people she loved, there is no sign of that thing in Jigen.

Kagiya has also other powers such as She could perform interstellar travel, subduing people into sleep, hypnotizing them, erasing their memories, or even unleashing a powerful shockwave from her eyes capable of blowing away or maiming people While Jigen has a kerma mark on his chin, which has provided a number of enhancements, including a significant improvement in lifespan after maintaining a physical prime for over 1,000 years. It can be activated freely and spreads throughout the body with nearly symmetrical sun rays.

So the final verdict and my opinion state that Kaguya is more powerful than Jigen due to more number of attacks and other things which make her super powerful moreover she is a master at manipulation which is the most powerful weapon which can’t be seen but only is used by a person who possesses some different kind of mind powers.

For more posts like these please keep visiting. Till then see you.