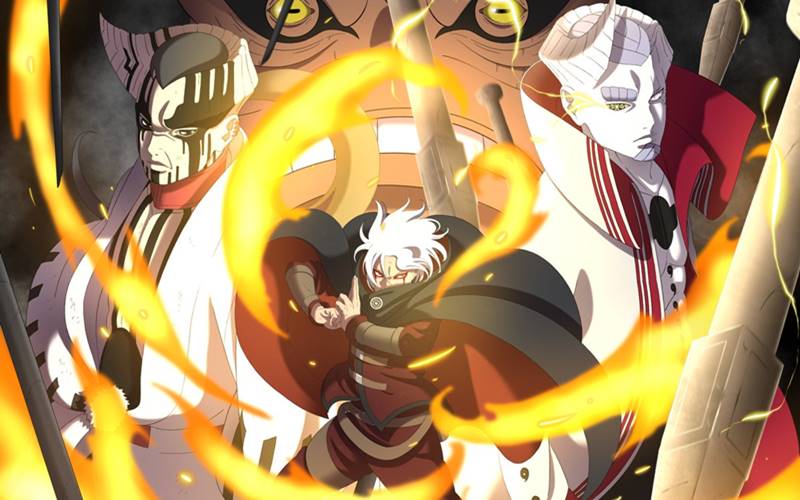 KOJI KASHIN: In this blog, we are going to see about a famous anime character called Koji Kashin, especially about his life cycle and death. Being a member of the evil organization Kara established by Jigen, Koji Kashin was having a personal connection with Naruto.

So even though he was introduced to other members, his role was very important. Koji had some special powers of unnamed space-time ninjutsu as he was able to leave the ten-tails with ease. He can also use this power to invoke burning flames in the Flaming mountains.

But Jiraiya had no skill with space-time ninjutsu. This was Koji’s strongest talent and this technique is called Trance of True Flames or Zanmai no Shinka. This is very powerful and anyone who came with it will die as it is fire!.No rain or wind or even other Kara members can off this fire emitted by Koji. His genetic template is of Jiraiya’s. So of course both will have similar powers. Like they have skill with fire release and earth release. Moreover, Koji has the skill with wind and water release also. Jiraiya was a Sage mode user.

And it was imperfect but Koji handled it with perfections. Jiraiya didn’t like the form of the chakra and so he didn’t utilize it. And he didn’t mix it perfectly. But Koji’s sage mode is the perfect one. Koji Kashin turns stronger when he gets into the sage mode of Mount Myoboku. He becomes more powerful by entering into it. He had used this Sage Mode against Isshiki Otsutsuki and before he was beaten up he was able to use this power to put a fight with him.
For the Boruto manga, most of Koji’s past was kept hidden, but his battle with Jigen revealed certain details.

As we said earlier Koji is create from the DNA of Jiraiya and this is how he entere Konohagakure without getting notice by anyone and that’s why his Jutsu is so similar to Jiraiya. So, Kashin Koji is an artificially create human. All the other members of the gang are create by science technology. Amado created Kashin from scratch using the DNA of Jiraiya. As a result, Koji’s body is capable of adapting to even the most adverse circumstances and fighting even the most powerful of opponents.

The reason is unknown why Kara members are assigne a roman numeral in them. Kashin koji’s numeral is ii which is on his face. It starts from the corner of his eyes. Kashin koji’s appearance in the anime and manga didn’t take place at the same time. In the anime, he appears in Episode 53 and manga it is in Chapter 15. In the anime episode, we can’t see his face that much. He doesn’t make his first appearance until much later.

He just stopped Isshiki Otsutsuki on his way and a huge fight happens. Koji was very strong as he held against two at a time, both Jigen and Isshiki Otsutsuki. But anyway he was defeated. Anyhow he managed to escape from the near-death stage. However, it’s not reveale yet how he die since then. Nobody knows about his fate. It is been kept a secret.