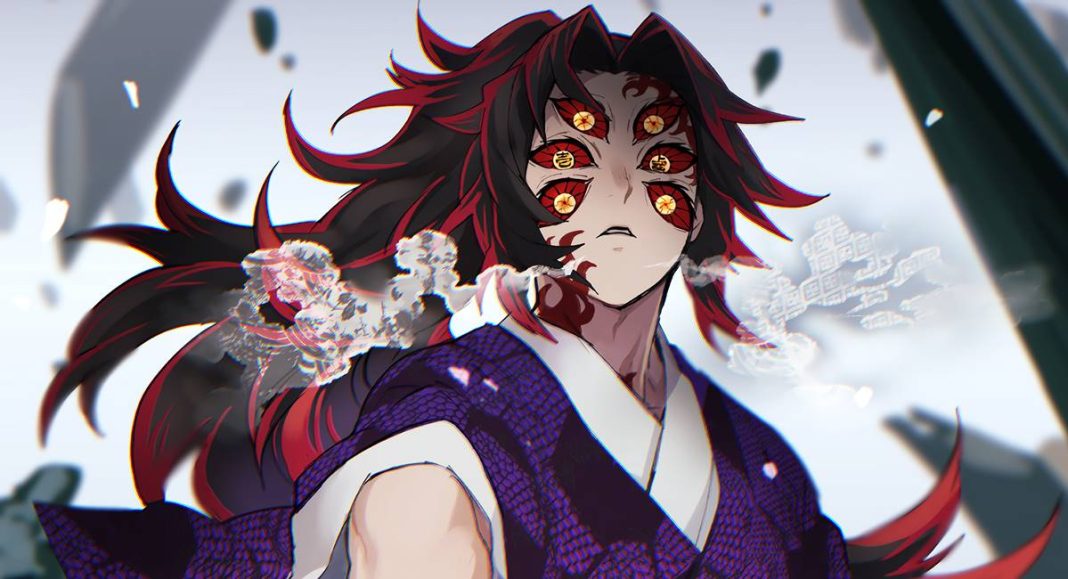 Kokushibo: Hello guys. This is blog is about another character from demon Slayer named Kokushibo. He is one of the major antagonists from the series. He is also one of the twelve moons and ranks number one. As a human, he was known by the name of Michikatsu Tsugikuni. He was one of the demon slayers in ancient times when he was a human, The brother of Yoriichi Tsugikuni is also a demon Slayer and is responsible for creating Kaigaku senior of Zenitsu into a demon. He is also the ancestor of the Muichiro Tokito and yuichiro Tokito. Here are some unknown facts about him.

As a human Kokushibo was a tall man with a decent face and good height. He was the twin brother of Yoriichi and looked like him. His hairs were long and black tied in a ponytail manner. When he was humans his looks were normal and he was a great person. After he met Muzan who made him a monster, his appearance changed and he turned into a demon-looking person. His color changed and turned pale looking. His eyes also changed from a set to two to a set of three covering his all face and cheeks having red color.

As seen from a past life, Kokushibo was a person with self Respect and serious dedication towards his goals. He was a family man who loved his family, his parents, and especially his brother. He is a man of honor who is challenged to fight gives his best. Kokushibo became a cowardly person when he discovered that he won’t survive after the age of 25 after he got his demon slayer mark. He then joined hands with Muzan the demon who helped Kokushibo in becoming a demon so that he can live long.

3. Family background and past life

Kokushibo was named Michikatsu tsugikuni as human beings. He was born in an era when Japan was in a state of war. Every day many people die and leading to a civil war. People were made for power even killing their subordinates and taking their position. He was born in such an era in a samurai family. He has to keep his guard up every time no knowing from where the enemy attack. Kokushibo was always against his lower subordinates and made them do difficult tasks.

4. Kokushibo Relationship with his brother

As a young person, Michikatsu was a very calm and good human being who looked after his younger brother Yoriichi. He sympathise with his brother as their father discriminated in them. His father didn’t treat Yoriichi well but Michikatsu helped his brother and also gifted him many things. But later his personality changed when one day he saw his brother getting stronger than him when his brother defeated a person whom Michikatsu didn’t even touch in a sword fight. Gradually Michikatsu’s jealousy increased and he sta hating his brother.

5. Growing jealousy against his brother

Michikatsu was very keen to become stronger than his brother but every time he tried anything he was still behind his brother. His hate towards his younger brother grows stronger and stronger. He still remained patient and trained harder, finally, after some time, he developed his own demon slayer mark and also introduced his breathing style known as moon breathing style. He was happy that he can finally reach his peak power and became stronger than his brother until he discovered that when someone develops a demon slayer mark they could only live up to the age of 25 years and later they will die. Michikatsu became horrified after listening to it and believing that he too will die.

When he discovered the truth of the demon Slayer mark that anyone who possesses it will die before the age of 25, Michikatsu started looking for ways how he can live more than that. In the process became across this demon named Muzan kibutsuji. Muzan explained that he could live longer if he becomes a demon. Michikatsu accepted the offer of eternal life as he would be able to train his sword technique. Muzan gave him a large amount of his blood and he became the most powerful demon after Muzan. After that, he was known as a demon named Kokushibo. After that, he killed the head of the demon slayer corps and presented it as a gift to Muzan showing his loyalty.

A demon slayer mark is something that is specifically awakened by those who train extremely hard against demons and it grows on their body on any part. No one could exactly tell the power of the demon slayer mark but it enhances the power of its users making them much stronger than normal slayer. But it has huge disadvantages as it decreases the ability of human age.

He also developed the ability to see through the transparent world which helps the user to see the muscles, blood, etc of his opponent. It makes them accurately predict the movement of an attack. He correctly assumed the attacks of all the demon slayers when he got attacked.

As far as seen, after sun Breathing, moon breathing is the most powerful breathing form present out there. Kokushibo developed this technique by himself. This is the most dangerous form of fighting style. It uses the Moon crescent style to do slashing and cuts. He developed many forms himself after he continued training for centuries. Some of the forms are Dark moon, pearl flower, loathsome moon, etc.