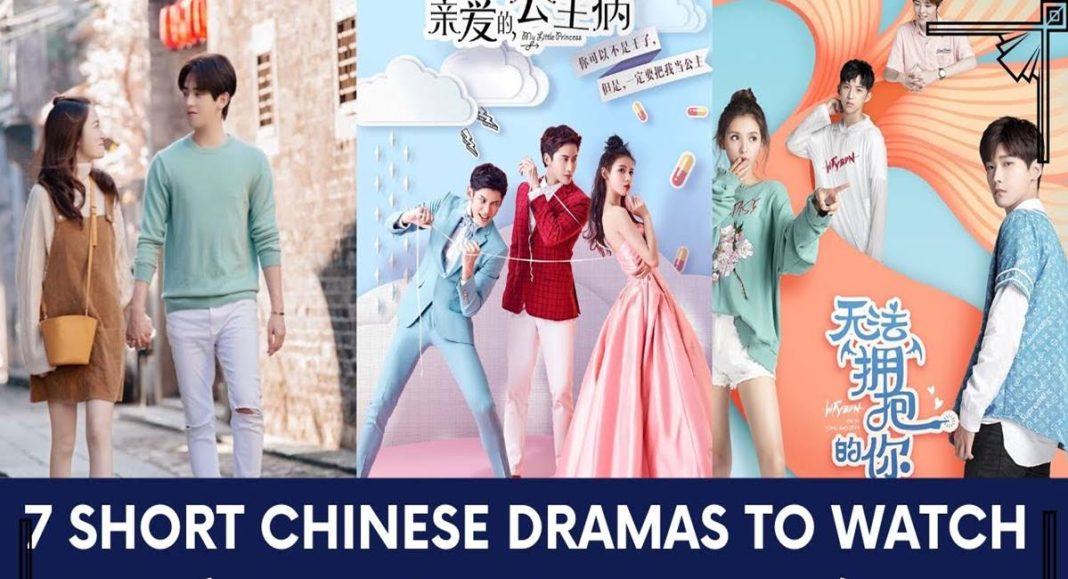 Less Episodes: Chinese dramas tend to be long, with 45, 60, or even 90 episodes being common. It’s a long story. Especially if you’re swamped with school or work and can’t devote much time to drama watching because nobody doesn’t want to start watching a C drama that will take months to complete. Here are some C dramas with less episodes.

What happens if a Han dynasty general falls into a deep slumber and awakens in the year 2020? In this fantastical rom-com, you’ll find out. “Hello Dear Ancestors,” says the narrator. You can’t help but adore our general Zhen Jun (Chen Zhe Yuan), who is so sweetly ignorant about the norms of the modern world. Zhen Ke Yi (Dong Qing), the female lead, isn’t your typical heroine; she’s a tomboy who doesn’t require a guy in her life. In Chinese, the names Zhen Jun and Zhen Ke Yi sound close to “genuine general” and “is truly something,” respectively.

The modern fairytale “My Little Princess” is full of charm and fluff. Lin Xing Chen (Zhang Yu Xi), the female lead, has a super-rich mother and suffers from princess syndrome. Her dignity is shattered when her arranged fiancé, Zheng Chu Yao (Kenji Chen),

makes it plain that he is primarily interested in a poor classmate at the same college. Lin Xing Chen promises to exact vengeance by making him fall madly in love with her and then dumped him; however, Jiang Yu Nian (Thai actor Mike D’Angelo), another student from the same campus, constantly manages to derail her plans.

8. A Love so Beautiful

If you haven’t seen this worldwide sensation yet, now is the moment. With her natural depiction of a basic and honest high school girl who energetically pursues her crush Jiang Chen (Hu Yi Tian), her classmate who is chilly on the surface but warm on the inside,

rookie actress Shen Yue stole the hearts of worldwide drama viewers in no time. For once, the girl is the one chasing the boy, which makes for an interesting viewing experience.

Have you ever fantasised of escaping reality by teleporting to a lovely summer beach in the blink of an eye? Qi Xun (Gao Han Yu), the male lead in “Flipped,” is capable of just that. He can teleport to any location as long as he sees an image of the location he wants to go to. Furthermore, his sister has the ability to look into the future. However, their powers have some serious drawbacks, and when Qi Xun approaches painter Feng Shuang Shuang (Charlene Chen), who may be the only person who can save them, a romantic love story ensues.

This fantasy rom-com marks actor Johnny Huang’s long-awaited drama return following his breakout role in the BL drama “Addicted.” He is one of China’s most promising young performers, having recently won Best Newcomer at the prestigious Asian Film Awards for his film “Operation Red Sea.” He plays He Lan Jing Ting, a fox in human form who is blind during the daytime, in “The Love Knot: His Excellency’s First Love.” For a thousand years,

he has been looking for every reincarnation of his human beloved, who is doomed to die at the age of 25. Every time he finds her in Guan Pi Pi, he helps her fall in love with him all over again, but things don’t go as planned this time.

This humorous high school drama combines true events with the vibrant imagination of quirky female lead Ye Mu Xi (Eleanor Lee). Ye Mu Xi is surprised to learn that her childhood foe Liao Dan Yi (Huang Jun Jie) is once again in her class on the first day of high school. She chooses to grab the class president title from Liao Dan Yi on the spur of the moment, fearing that he will use his power to discipline her as he has done every school year. “The Big Boss” is your best pick if you’re seeking for more comedy than romance.

Male protagonist A Zhai (Bai Shu) is an otaku who has the chance to buy his dream lover robot but orders the wrong one (played by Leon Li). Fortunately, he may also claim a female one (Elvira Cai) – only to make another blunder by allowing her to fall in love with the male robot, resulting in a hilarious disaster. The plot concept could be interpreted as a spoof of Yuu Watase’s popular Japanese manga “Zettai Kareshi,”

which was successfully translated into a Japanese and Taiwanese drama. If you like “Zettai Kareshi,” mark your calendars for “Absolute Boyfriend,” a Korean translation starring Yeo Jin Goo and Minah, which will be released next month!

In “Proud of Love,” two university students swap bodies after a fairly terrible first encounter. Despite the fact that body-swapping is an old drama cliche, it is always entertaining to witness. Furthermore, the drama does not take itself too seriously, resulting in even more amusing scenarios. Vivian Sung and Tong Meng Shi appear in the drama, and Darren Chen, best known for playing one of the F4 in the recent remake of “Meteor Garden,” which is based on the famous Japanese manga “Hana Yori Dango” by Kamio Yoko, joins them as the second male protagonist.

Who says historical plays have to be long? The war for the throne, scheming concubines, assassination attempts, and other aspects of a royal drama are all present in “The Eternal Love.” The main focus, however, is on the romance between Mo Lian Cheng (Xing Zhao Lin), the 8th prince of the fictional Dongyue country, and Qu Xiao Tan (Liang Jie), a spunky lady from the present who time-traveled

and now shares a body with Mo Lian Cheng’s wife, Qu Tan Er. This small-screen drama is chock-full of beautiful and personal couple moments, and it was such a hit that a third season is already in the works. You can celebrate since Xing Zhao Lin and Liang Jie will reconnect in “You Are My Destiny,” the Chinese version of the iconic Taiwanese drama “Fated to Love You”!

Mu Xiao Xi ran into Kong Chen Yi, the masculine deity of music, by chance. Mu Xiao Xi had assumed they would never meet again, but the school celebration party shortened the gap between them once more. They progressed from friends to ambiguous to lovers as their comprehension of each other grew. Mu Xiao Xi followed Kong Chen Yi to Beijing after graduation. Work, life, and professional concerns wreaked havoc on their relationship, leading to Xiao Xi’s decision to leave. They reconnected at an event several years later.