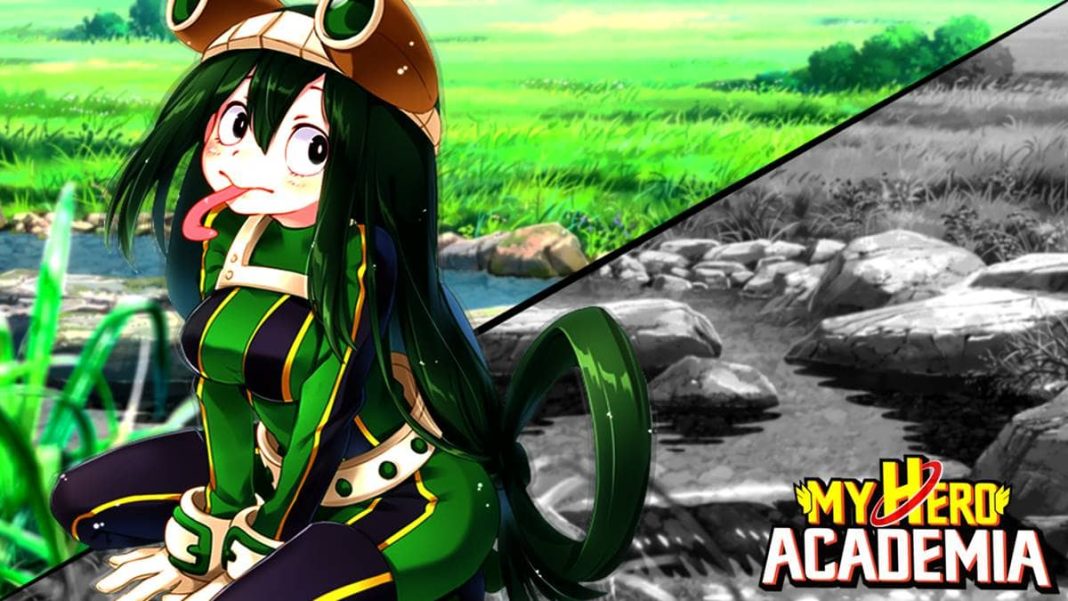 MHA Asui: The vibrant and emotive character designs are one of the first things that jump out in My Hero Academia, and they continue to do so. Despite the fact that they’re complex enough to keep layers about themselves secret, it only takes a quick glance to figure out what Bakugo and Uraraka are likely to be like.

The rainy season hero, Froppy, who is better known to her fellow heroes-in-training as Tsuyu Asui, has to be one of the most uniquely created students. Due to her resemblance to a frog, some features such as her eyes, mouth, and hands have been enlarged and made more noticeable, giving her a unique and adorable appearance. She rapidly became a fan favorite due to her surprisingly mature and honest nature, yet there are some details about her that even a die-hard fan might overlook.

Importance of the Family (MHA Asui)

It’s difficult not to think of Izuku and Uraraka’s parents when thinking of their characters. After all, Izuku’s mother is always rooting for him and worried about his safety, while Uraraka’s main motivation for becoming a hero was to make her parents’ lives simpler.

Tsuyu’s family is more important to her than the aforementioned combination, despite the fact that they are less discussed. She was forced to become the designated caretaker of two younger siblings when she was still pretty young, but she never complains about it. When she had to start living on-campus, she went out of her way to keep in touch with her siblings via video chat.

Tsuyu is one of the most distinctively drawn characters in the entire series, which usually implies she has a rather small audience. However, she manages to rank unusually high in official popularity polls, at least before the series continues several seasons and new characters are added. In the first two Japanese polls, she came in sixth and ninth, while she was actually more popular in the West, coming in second behind only the titular Izuku Midoriya in the first U.S. vote.

Intelligence that is kept hidden

It’s not like the show attempts to disguise the fact that Tsuyu is highly intelligent after all, she’s a master tactician who can stay calm and come up with good strategies on the spur of the moment. However, when compared to characters like Momo, who is well-known for being top-of-the-class in the brain department, the show never truly emphasizes her brilliance.

Tsuyu isn’t far behind, as she placed sixth out of twenty in her class’s midterms. Only very talented prodigies like Todoroki and Bakugo, as well as the exceedingly studious Momo and Ida, were able to surpass her.

Overlap Between Names and Aliases

When everyone gathers to choose their official hero names, Tsuyu chooses Froppy, the rainy season hero, a name she’s had in mind since middle school. While everybody who has seen the series will be aware of this, what is less well known is how her real name and her hero name link to each other in a literal sense. The kanji in Tsuyu’s first name translates to ‘rainy season’ when put together. It’s unclear whether Tsuyu is aware of this or if she simply chose her hero name because the rainy season is her favorite.

Gender-Swap as a concept (MHA Asui)

Although it’s difficult to image Tsuyu as anything other than a trustworthy older sister, she was originally intended to be a male character. The only reason she became a female character was that the author felt that Class 1-A lacked female characters, therefore she was transformed to help fill that void. Toru Hagakure, the invisible girl, was similarly created with the intention of being a guy but was transformed owing to a lack of female representation.

Tsuyu’s family isn’t shown in the main series, despite the fact that it appears to be a straightforward fact that viewers would be aware of. They’re only seen in the series’ second OVA, which came packaged with the fourteenth volume, and the animation crew behind it is the same one that worked on the Two Heroes film. Ganma, Beru, Satsuki, and Samidare are Tsuyu’s father, mother, sister, and brother, respectively. Tsuyu has a strong resemblance to her mother, albeit she does not have her mother’s wide face.

Statistics from the government

Viewers no longer have to assume how powerful a character is in many fields just by seeing them, according to the official Ultra Analysis book. However, because they aren’t publications that every fan will have obtained and read, many people may still be unaware of Tsuyu’s full powers.

Her top stat is a six out of six for dependability, making her the ideal teammate. Her technique and ability are both fives, her speed is four, and her weakest stat is power, which is three.

Specifics of the Odd (MHA Asui)

Tsuyu is defined in the anime as “able to do anything a frog can do,” however this isn’t precisely accurate when it comes to how her peculiarity actually works. There are obvious skills, including her frog-hop, tongue extension, ability to attach to walls, and camouflage ability. However, her ability to secrete mucus, which can cause irritation, disguise odours, and even cause paralysis, goes almost entirely undiscovered. A major drawback of her abilities that isn’t display is that, because she is so similar to a frog, she will hibernate if exposed to extremely cold temperatures for an extend period of time.

Design in a Downbeat Tone

Tsuyu’s optimism isn’t as publicly displayed as some of the other characters, but her capacity to keep a reasonable, level head even in the direst of situations is another sort of optimism. However, in the first draught of her design, she was depicte as a more gloomy character, whose personality would have been more in line with her “rainy season” moniker. Her original concept also featured her with a lot more human-like appearance, and it’s difficult to imagine her without all of her physical frog-like oddities.

The moral compass that is strong

Tsuyu has an exceptionally strong sense of values and a greater grasp of such matters than their other classmates, despite his youth. This is most evident when the other kids become enthused about pursuing Bakugo—which makes sense given their lack of experience dealing with actual villains and their desire to save their comrade. Tsuyu, on the other hand, stays strong, reprimanding them by patiently stressing that if they disregarded regulations to get what they desired, they’d be no better than the villains, even though their reasons seemed reasonable.