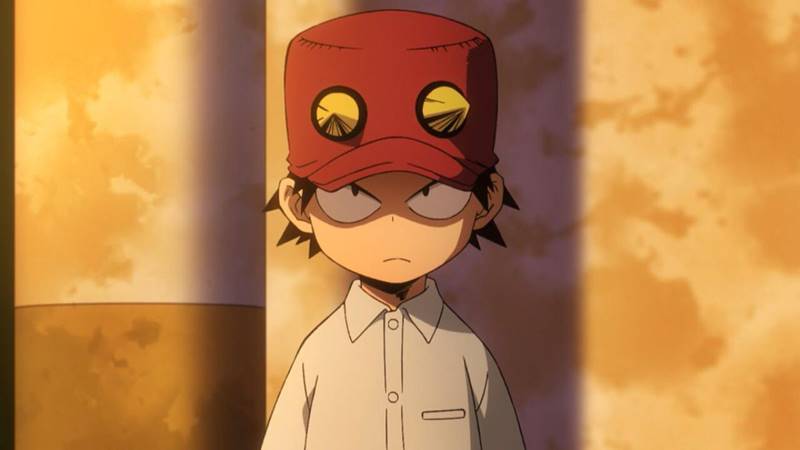 MHA Kota Izumi: When you first meet Kota, he may appear to be a difficult character to like, but he has a lot going for him. In the universe of My Hero Academia, there are plenty of conflicted and determined characters. Kota Izumi may be one of many, yet he is not a stereotypical figure. Kota was little more than an enraged youngster when we first encountered him. But he has already matured significantly throughout that unique arc.

Kota is a little lad with spiky black hair who is around the same height as Minoru Mineta. His outfit comprises black shorts and a short-sleeved collared shirt with buttons. During the cooler months, he is spotted wearing a hooded sweatshirt. He also has two golden spike-shaped horns on the front of his crimson hat.

So today, we’d want to talk about young Kota for a few minutes. With someone like Deku as his role model, he’s a figure with boundless potential. With that in mind, here are ten facts about Kota Izumi that every fan should be aware of.

Birthdays and zodiac signs are among the first things individuals learn about each other, aside from the obvious. Okay, they aren’t always the first things that come to mind, but they can become crucial later. Kota was born on December 12th, which makes him a Sagittarius, which, given the circumstances, seems appropriate. Hopefully, this is a sign of the kind of hero (or person) he’ll grow up to be.

Fans of the show will recall how Kota acted when he initially appeared in the series. He was furious and enraged, and he said (or thought) nothing nice about young Midoriya. Naturally, there’s a good explanation for this.

Kota has a lot of issues with abandonment. His parents, in his perspective, opted to abandon him to be heroes. He didn’t perceive it as them attempting to strike a balance between their two lives, but rather as a decision to exclude him from theirs (or, as it turned out, them out of his).

During the exciting encounter against Muscular, Kota’s quirk, Water Gun, was exhibited in a fairly weak form. That being said, there’s every reason to believe (and hope) that it will become stronger with time.

For one thing, Kota is young and has never tried to control his peculiarity. It’s possible that was the first time he willingly used it. If he persists, he may grow his quirk and subsequently follow in his parents’ footsteps.

Fans with keen eyes may have noted that just because Kota’s major story arc is completed doesn’t mean he’s finished with the series. Kota has made at least two cameo appearances in the series, but they are somewhat minor. The Home Visits program (actually, his letter) and the Hero Billboard Chart included him (during the Pro Hero Arc). The latter occurrence, however, has yet to take place in the anime.

Water Hose, Kota’s parents, was a hero duo. We don’t know how common it is for couples to be heroes together, but it feels significant in this case. It does, however, raise the risk. They went down together when they lost. They abandoned their son.

Both had water-related peculiarities, although we’re not sure what they were called. At the very least, we can assume based on Kota’s peculiarity. Another interesting fact about Kota’s parents is that their real identities were never revealed. At least, not yet.

Even when Kota was at his worst, believing that heroes were self-serving, he had a valid point to make. People should first learn to be good people before they learn to be heroes. Of course, he meant it as a sarcastic remark. But there’s a point to it. How many heroes have we seen who shouldn’t have been there in the first place? That they were there for all the wrong reasons? We have a lot more than we’d want to admit.

Kota has troubles with heroes, as fans now know (if they didn’t already). Mostly due to his problems with his parents. To cut a long story short, he had a skewed view of all heroes, believing them to be greedy and attention seekers due to his loss and sorrow.

When Midoriya rescued his life at considerable risk to himself, Kota began to reconsider his position. This is demonstrated in two ways: first, when he attempted to help Deku with his quirk, and subsequently, his letter. Kota may never be a hero, but he will never be a civilian who despises heroes.

Like that of many (if not all) of the characters in My Hero Academia, Kota’s name carries a specific weight. ‘Kota’ is made from characters that mean sparkling water’ and ‘washing.’ Don’t you believe these, taken together, lend themselves to his eccentricity?

More than that, his surname is significant. Izumi is a Japanese word that means “flood.” That works for both his and his parents’ peculiarities.

9. There is a similarity to be found.

Kota is strikingly similar to another anime character. Naruto’s Inari, to be precise. Consider that for a moment. Both were young boys who began the series by despising the main protagonist, but by the conclusion had their minds and hearts changed because of him. Furthermore, both lost their families to the series’ villains, and as a result, they’ve become jaded. They were jaded, that is until the heroes arrived.

So far in the series, numerous lines have been drawn. Shigaraki, for example, is related to All Might’s mentor. As a result, we’ve been paying closer attention to additional parallels. Kota has an uncanny resemblance to a young Kotaro Shimura.

That is, Kotaro being Shigaraki’s father. Both have black hair, share some evident resemblances in names, and even shared a childhood. Kotaro, like Kota before him, despised heroes. Finally, both are linked to the League of Villains, albeit in a divergent way.