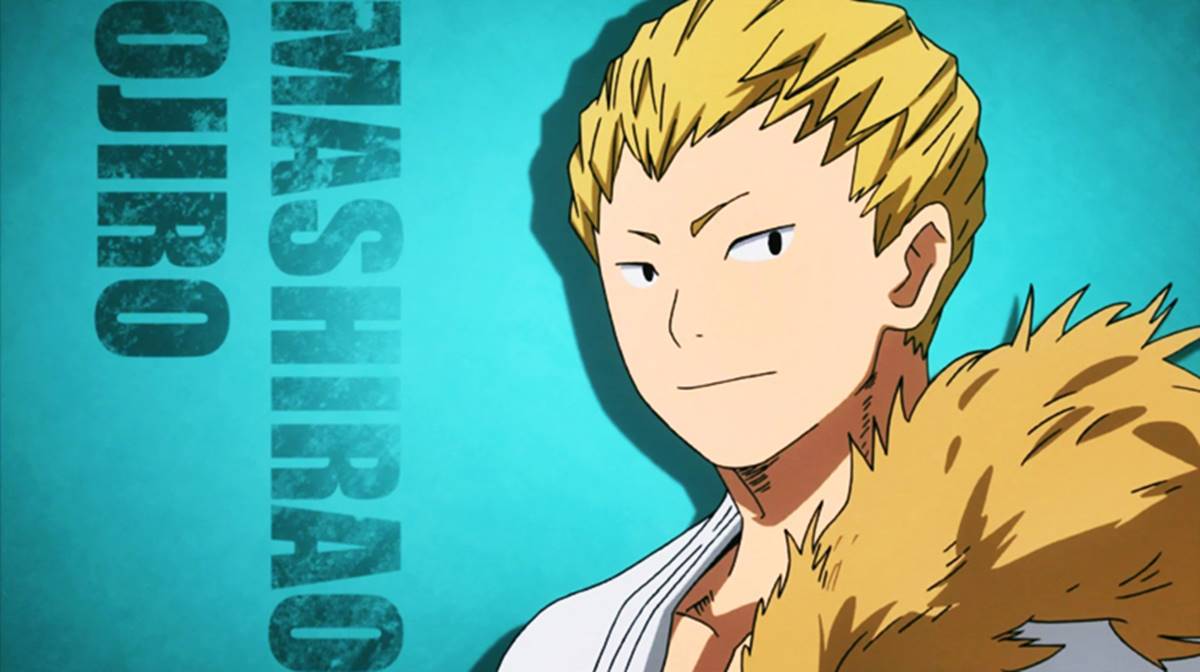 MHA Ojiro: Many people are perplexed as to why Ojiro is so popular in Japan (or why I’m so infatuated with him) despite his limited screen time. This is for you if you don’t know much about Ojiro or want to learn more about him. We caught up on Ojiro, which you probably missed or were unaware of because it was derived from other sources or was more of a Japanese phenomenon. We’ll skip over the obvious details like his Luke Skywalker-inspired attire and his monkey motif.

Some of this information may have already been shared in comments or prior blogs, but we thought it would be great to share it for people who don’t have time to read my lengthy posts. So, have a quick glimpse at the top 10 facts about Mashirao Ojiro.

1. Mashirao has a Muscular Body

Mashirao is a muscular young man with short blond hair that is swept to the front of his head. His lower eyelashes are missing, and he has small eyes. He wears pale grey sneakers with his school uniform instead of the brown dress shoes used by the rest of his classmates,

and he leaves the bottom button of his jacket undone casually. He also possesses a tail that is completely hairless save for the tip due to his Quirk.

2. Mashirao is Ethical and Well-mannered

Ojiro has a strong moral compass and is exceedingly ethical when it comes to dealing with others. As a result, he speaks in a nice manner. He also treats the girls with a lot of respect, which is presumably why he is the only guy in class who is observed hanging out with more than one girl outside of class. Because of his ethics,

he was so naïve in a drama CD that he didn’t grasp a dick reference Sero was attempting to convey to him. If you’re interested, I’ve translated the whole thing here, and it largely includes Him, Kaminari, Sero, and Aoyama, with Deku and Mineta making cameo cameos.

Hori appears to have always wanted Ojiro to be a part of the comic. Hori decided on his name and design before other characters like Kaminari, who had yet to be name, and there were quite a few characters lacking when Deku first saw the class. Unlike the others who are scattered and Mina is clearly gone, he is still seated at the correct table. In addition, he appeared in the same exam as Deku. Horikoshi’s desire to create a character with only a tail derives from his fondness for Monkey tailed characters. Here’s something else to think about. Hori had a 3DS and made several Mii’s with Ojiro as the only ‘background’ when the Manga was still in its early stages.

4. Mashirao has a karate Hero costume

Mashirao’s hero outfit consists of a standard karate gi with a black belt and a fur-lined collar. He also has a pair of black boots with desert blue accents. His costume is slightly upgrading before the Provisional Hero License Exam Arc, now adding sand blue fingerless gloves. He wore a huge coat over his hero suit for the Joint Training Battle.

5. Mashirao has a Noble Personality

but he is also shy and sheepish, not particularly fond of being in the spotlight, and easily embarrassed. During hero work, he is humble but yet dependable and attentive.

6. Ojiro gets irritated to be called Plain’’

Others’ perceptions of him as “plain” is a running joke, and it irritates him greatly, revealing his sensitivity and self-consciousness about his own personality and abilities. He is frequently surprised

when Ochaco punches herself in the face and Eri brings home a sword that is considerably larger than she is. When he becomes excite about anything, he wags his tail like a dog, albeit this is only shown in the manga.

In terms of physical ability, Mashirao has shown to be a formidable opponent. His abilities helped him place seventh in the Quirk Apprehension Test. Mashirao employs his Quirk, Tail, to deliver direct attacks or aid in his fighting moves. His fighting style entails using his prehensile tail in conjunction with his martial arts knowledge to engage foes in close range combat while performing rapid and acrobatic maneuvers.

8. His Tail has a significance (MHA Ojiro)

Mashirao’s tail is important to his speed and mobility since he can propel himself in the air by slapping his tail on the ground with enough force, allowing him to avoid obstacles on the ground. Despite his combat proficiency, Ectoplasm remarked that Mashirao fights predictably,

as tailed humans like him prefer to move in a pattern that can be easily exploite. Mashirao modified the principles of his motions to become less predictable in combat to eliminate this influence.

9. He is too casual in Hospital (MHA Ojiro)

Ojiro was dress casually like everyone else when the class went to see Deku in the hospital… maybe a little too casually. He was dress in a Jinbe, which is a summer festival or casual house wear garment. So either he frequents the hospital because it’s close by, or he’s so use to it that he wears it out everywhere, or he comes from a traditional family.

Mashirao is well-known for his intelligence, having received an 8th place finish in the midterms, demonstrating his academic ability. Mashirao resigned from the U.A. Sports Festival after the Cavalry Battle, realizing that Hitoshi Shinso had used his Quirk to control him, Nirengeki Shoda, and Yuga Aoyama. While Mashirao didn’t fully comprehend Hitoshi’s Brainwashing Quirk, he was aware that chatting to the Class 1-C student was a factor,

which is why he advised Izuku Midoriya against it. Mashirao also appears to be inform about various fitness routines, as he described the activity Izuku was doing during one of their courses in detail.