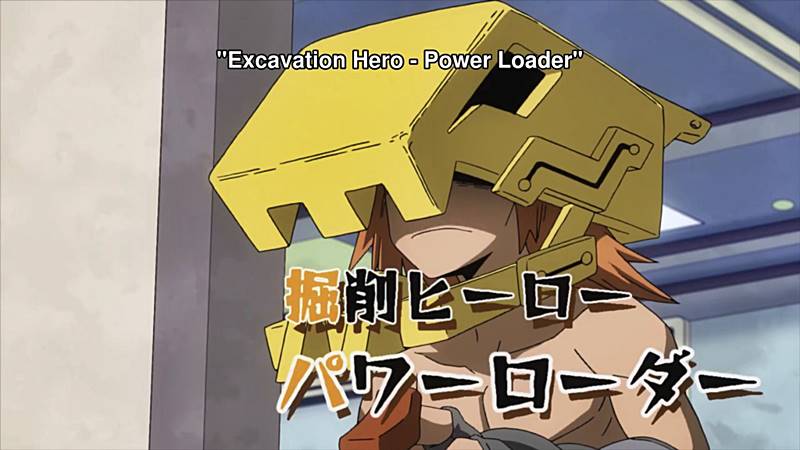 MHA Power Loader: Higari Maijima, popularly known as Excavation Hero “Power Loader,” is a Pro Hero and a member of the Support Courses faculty at U.A. High School. Power Loader is a short, svelte man who, despite his old age, maintains a young appearance. He has spiky ginger hair that reaches just below his shoulders, dull blue eyes, and a wide mouth. His hands appear to be the greatest part of his body, disproportional to his little size, and he has an orange L-shaped component at the end of each finger because of his Quirk. Have a look at the top 10 interesting facts about Higari Maijima of My Hero Academia.

His hero outfit consists of a giant yellow helmet in the shape of a rectangular excavator claw, with the top piece jutting outwards to cover his head and most of his face and the bottom piece serving as a long jaw-guard. He also wears a pair of basic cyan slacks and a pair of enormous, fingerless grey gloves with metal protections that reach down his arms. His helmet is connected to a massive steel appliance that he sits on and can utilize for warfare because it has a pair of large metal arms.

9. Power Leader is a Strict Teacher

Power Loader is a tough teacher who wants nothing more than for his students to succeed. He has a mixed love-hate relationship with Mei Hatsume, being easily enraged by her irresponsibility and constantly threatening her with expulsion from the Development Studio, but recognizing her creativity and productivity.

Class 1-A’s Tenya Ida rushes to U.A. High School to gather Pro Heroes who can assist his classmates who are being attacked in the Unforeseen Simulation Joint. Tenya and Nezu are accompanied by Power Loader, who is one of the faculty members who will accompany them to the U.S.J. Mashirao Ojiro is rescued from the inferno zone by Power Loader.

7. Power Leader was taken down by Bakugo

Bakugo, like Shoto Todoroki, is a highly gifted Class 1-A student. Bakugo is considered one of the hero hopefuls who could one day replace All Might as the Symbol of Peace because to his great abilities. Bakugo’s Quirk, Explosion, allows him to break through boundaries that some of the pro Heroes are unable to overcome.

Bakugo has previously faced some of the series’ most powerful foes, and his skill is enough to give him a spot on the list of strongest heroes. Bakugo should have no issue dealing with Power Loader because he isn’t particularly powerful.

6. Power Leader is against Tenya in Final Exam’

The faculty meeting when the teachers agree to amend the practical element of the Final Exams is attended by Power Loader. Mashirao and Tenya are his opponents. He and the other professors inform the kids in Class 1-A about the changes to the exam. Power Loader sets dozens of traps in a dirt field for Tenya and Mashirao to navigate in the third practical test matchup. Tenya employs his Recipro Burst technique to cross the field quicker than the holes appear,

but Power Loader meets him halfway. Tenya sends Mashirao soaring past Power Loader and out the escape gate with his quick thinking and Recipro Extend maneuver. Following that, Power Loader congratulates Tenya on his promotion.

Nejire Hado is regarde as one of U.A.’s most influential pupils. It’s no surprise that Nejire Hado, a member of the University of Arizona’s Big Three, has made this list of students capable of defeating Power Loader. Her ability to fire her energy in the form of shockwaves from a distance,

known as Wave Motion, makes her a threat to most Villains. Being able to defeat Power Loader is a guarantee for Nejire, considering the latter isn’t a particularly powerful Hero, but Nejire will soon become one of the series’ most powerful pro Heroes.

Students visit the Development Studio to refine their costumes as Class 1-A prepares for the Provisional Hero License Exam. After school, Mei joins him and nearly blows up the lab. Outside in the corridor, she runs into Tenya, Izuku Midoriya, and Ochaco Uraraka. Mei is warn by Power Loader that if she continues to cause havoc in the studio, she will be expelle.

Izuku, Tenya, and Ochaco learn about the development process from Power Loader. Mei comes in and demands that they all check out her gadgets Despite her craziness, Power Loader claims that Mei is the most promising student he’s ever had.

The teacher in charge of U.A.’s Costume Development Studio is Power Loader. As a licensed developer, he understands how to create, upgrade, and maintain hero outfits. Higari has quite an interesting Quirk in that his fingers are tippe with metallic claws that are good for digging mining through the dirt, and he also has Iron Claws.

Higari Maijima is a pro Hero that works at U.A in My Hero Academia and is known as the Excavation Hero: Power Loader. Power Loader is a professional Hero, so it’s no surprise that he’s capable of taking on the typical Villain. He has the Iron Claws Quirk, which allows him to dig through things, which also explains his Hero name. Power Hero is consider as one of the strongest pro heroes of the My Hero Academia Anime series.

1. MHA Power Leader is not the Strongest of all

Although Power Loader is a formidable opponent, he isn’t among the series’ top pro Heroes. As a result, many students, particularly those categorized as prodigies, are capable of defeating him in a battle, and there are plenty of them. Power Hero is considere as one of the strongest pro heroes but there are certain times when he is expect to get defeate by many others. Some of them are Tokage, Hitoshi Shinso, Tokoyami, Todoroki, Eijiro Kirishima, etc.