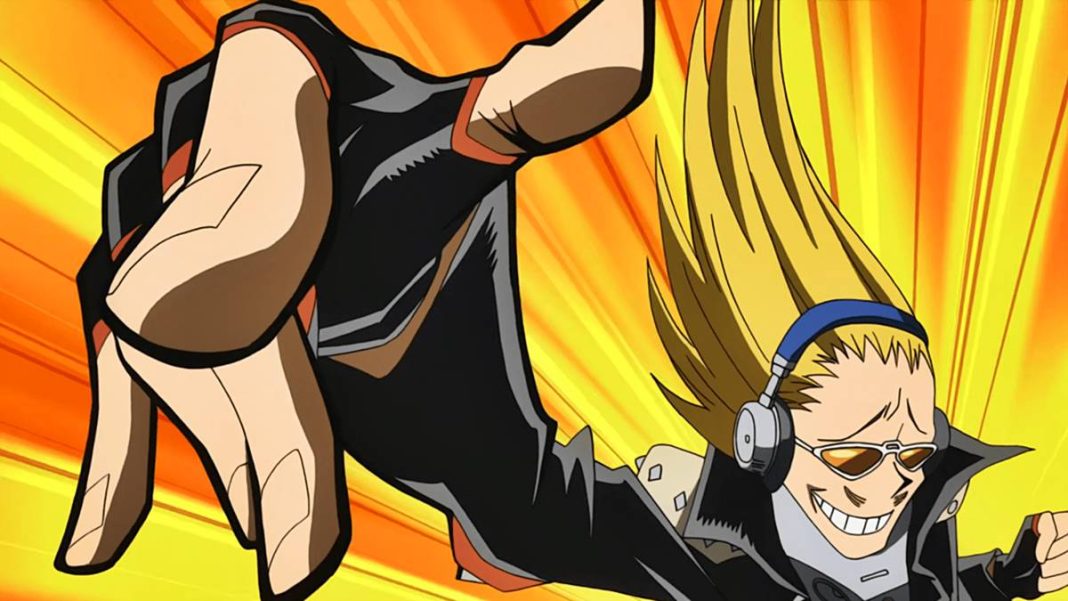 MHA Present Mic: Many colorful and fun characters populate the cast of the hit Shonen anime series My Hero Academia, which is nearing the end of its fourth season as of this writing. Another season is on the way, and we can’t wait to see more action scenes involving some of our favorite characters. Present Mic, a UA teacher, could be one of them.

From the homeroom teachers Eraser Head and Vlad King to the art teacher Midnight and the English teacher Present Mic, the majority of the UA staff are pro heroes. Indeed, Present Mic is one of the first teachers we meet at UA, and he makes an impression. But he might be more than meets the eye. Let’s take some time to get to know each other better.

The entire cast of My Hero Academia is on the younger side; no one is over the age of 40. True, All for One is quite old (possibly more than a century old), and Gran Torino is in his prime. However, the majority of UA’s teachers are all Millennials.

This includes Present Mic, who in the first few episodes of My Hero Academia is a sprightly 30 years old. He still has a long career ahead of him, and we’re sure he’s honing his quirk and combat skills in case of trouble come knocking. He isn’t quite ready to pass the torch to the next generation.

Back in their student days, these are Present Mic and Eraser Head, and they had varying levels of excitement for hero names and outfits. Present Mic wants to make a display of things, whereas Aizawa just wants to get the job done.

Prompted by Aizawa’s lack of interest in trying to make up a name, Present Mic came up with Aizawa’s name “Eraser Head” all at once. Mic, the presenter, wasted no time in coining the ridiculous but endearing name Eraser Head.

3. He has a punk aesthetic

Unlike UA’s student uniforms, each hero costume must have its distinct style and pattern, and many hero costumes are designed to enhance the user’s quirk. Colors, materials, and accessories can all vary greatly.

Mic is dressed in the punk style popular in the UK and the US in the 1970s and 1980s, with black leather, fingerless gloves, a studded belt, boots, and a tall variant of a mohawk. Fortunately, he only dresses like a punk, and his heart is as pure as his hair.

In Japan, it is natural to believe that your blood type, like astrology signs or Chinese zodiac birth years, determines your character. Mic’s blood type is B, according to official My Hero Academia sources.

So, what should B-type people be like? They are free-spirited, creative, have short attention spans, are inquisitive, and are daring. Overall, we must conclude that Present Mic has the appropriate blood type for his character!

What exactly is in a name? Author Kohei Horikoshi made a point of giving all of his characters meaningful names based on the kanji used to write them, and the meanings frequently relate to the owner’s quirks. What about Present Mic?

Hizashi Yamada is his name, and Hisashi Yamada, a real-life Japanese radio host, hosts “Hisashi Yamada’s Radi-Unlimited” on TOKYO FM. Do you want to hear what’s going on?

Present Mic is the one who explains the quirks of everyone on screen, and we get the impression that he enjoys it. He not only volunteered for the job, as opposed to some generic narrator, but he’s also enthusiastic about it.

He contributes to the enjoyment of quirks in this way, and Aizawa narrated the details for his own quirk’s outline. Present Mic wrote the description for his quirk based on the wording. He must have had a good time as well.

We all know and love Present Mic for his outgoing nature and colorful ways, but he wasn’t supposed to appear at first. Originally, author Horikoshi planned to have a fat, bald old man host the school direction ceremony. However, the author quickly realized that such a character would be boring,

so he created Present Mic as we know him to keep the excitement going. As a nod to the original design, Present Mic has “baldness” written on the speaker device of his hero outfit.

8. He is worried about the students (MHA Present Mic)

Present Mic is a goofy and careless individual, but he is not irresponsible. He cares deeply about the UA students, almost like a big brother, and he was upset when Ochaco and Bakugo’s duel in the sports festival heated up. After witnessing Bakugo’s destructive potential,

Present Mic panicked and called for the match to be called off early so that Ochaco would not be seriously injured. But Aizawa talked him down, explaining that Ochaco, as a proper student, did deserve a fair chance to show off her skills and win the match on her terms.  She didn’t need other people to defend her in that way, but we recognise Present Mic doing so.

9. He is a radio personality (MHA Present Mic)

With his punk clothes, headphones, and outgoing personality, it’s clear that Present Mic enjoys acting and dressing like a radio DJ. But it’s not just a gimmick for his costume; he lives it as well.

Present Mic enjoys watching TV and listening to the radio, and even better, he has his radio show called “Put Your Hands Up Radio.” Every Friday night, he broadcasts music with no commercials.

10. He is only moderately well-liked (MHA Present Mic)

Students and faculty at UA appear to have mixed emotions about Present Mic, because he does his job well, but he’s loud and silly, and he doesn’t captivate an audience as well as he’d like. But how do his fans feel about him?

Yes, to a point. In the first fan vote for My Hero Academia, he came in 36th place. He got a break in the second poll, rising to 17th place. That’s not bad; we imagine his cool personality and outfit compensated for his lack of great action sequences.