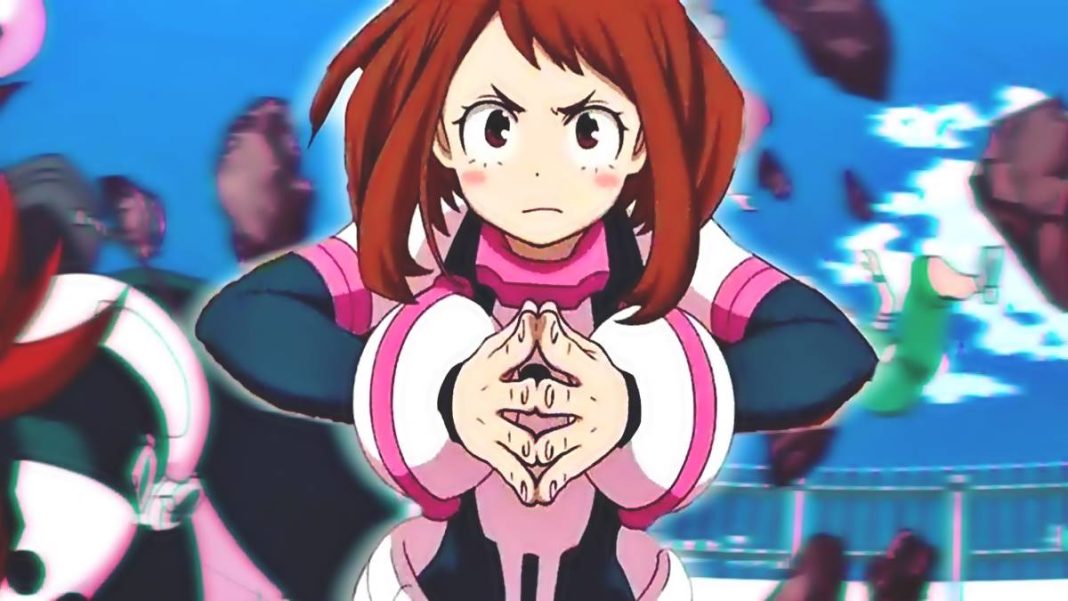 MHA Uraraka: Ochaco Uraraka is the main character in My Hero Academia. She is a short girl with a slim and feminine figure. Her trademark hair features two long clumps of hair on each side of her face, as well as small bangs that cover half of her forehead. She’s become a program staple. She was created to contrast the darker narratives of characters like Shoto and Katsuki with more colorful yet relevant and realistic character development for a female character and a picture of current capitalism through her family. In this blog, we will discuss the top ten facts about Ochaco Uraraka.

1 Ochaco Uraraka is her humble origin.

Unlike Shoto Todoroki, Ochaco’s parents were exceedingly please and supportive of her life choices and efforts, and she got along swimmingly with her loving and caring parents. They are, however, a lower-middle-class family, barely scraping by to put food on the table while working in the construction industry. In the manga, it appears that her family does not use an air conditioner throughout the summer.

Ochaco Uraraka was originally intend to be a Yu Takeyama, a girl who can use her quirk to enhance her size and grow big. As a result of the adjustments in the creative process, her character has evolved into what it is now, and the vision for Yu Takeyama becoming Mount Lady, one of the first Pro-Heroes we see in the manga and show, has been realizing.

3 Her Motivation For Becoming A Pro-Hero :

4 Her Ambitious Side (MHA Uraraka)

Don’t be fool into thinking Ochaco’s soft demeanor and silly grin make her a pushover in battle! Ochaco falls behind some of her peers in dueling skills, but she is doing her all to become a formidable hero and establish her worth. Characters with grit and courage are usually admirable, and Ochaco showed exceptional toughness.

when she dueled Bakugo and pushed him to his limits. She also created a brilliant combat strategy to lift all of Bakugo’s wreckage and produce a meteor shower. When Ochaco lost, she took it hard, but her competitive spirit hadn’t dimmed.

5 She Is Self-Contained (MHA Uraraka)

Ochaco’s ability to be both a team player (more on that later) and a lone warrior is part of what makes her an excellent hero-in-training. Ochaco likes to fight alongside her comrades, but she isn’t obligatd to do so,

which is crucial given her recent participation in the brutal Sports Festival tournament. Some secondary characters in action series (typically girls) crumble if they are alone or otherwise vulnerable. Not Ochaco, who is much tougher. She created a scheme that almost worked against Katsuki Bakugo on her own, and let’s not forget the time she outmaneuvered Himiko Toga with a move.

Ochacho, like the majority of the individuals she meets within My Hero Academia, is a teenager. The series is full of high school quirks, and Ochacho is no exception. When someone gets closer to Izuku Midoria than she is, she becomes envious. She acts strangely anytime she has to share Izuku’s attention with anyone else; it’s just her nature. Also, Ochaco still utilizes a flip-phone while all of her classmates use a smartphone, that is because of her family’s economic situation,

7 Part of the Team (MHA Uraraka)

Now let’s view at the opposing view of the equation. Ochaco is tough, but she isn’t arrogant or irresponsible enough to battle on her own all the time as Shoto and Bakugo do. Even seasoned experts usually work in make-shift teams. Therefore a hero is someone who can fight as a team.

Each UA student has a cooperativeness measure, and Ochaco’s, like Izuku’s, is quite high. She didn’t mind that Izuku was a prime target during the cavalry combat, and Izuku was ecstatic to accept her offer. Ochaco also uses her zero-gravity quirk as a battle support quirk to help remove rubble and rescue those stuck inside. She’s got you covered!

It’s been state that she obtain her early melee training from the legendary pro-hero Gun Head (Gatling). Ochaco enrolled in this class to improve her melee combat skills, one of her weak points. She was an excellent student, and her training transformed her into a new breed of hero, skilled in hand-to-hand fighting. This is what allowed her to avoid death at the hands of Himiko Toga narrowly.

9 She Reminds Me of Himiko Toga

Ochaco and Tsuyu met the wicked girl Himiko Toga, an acrobatic girl with a blood-sucking, shapeshifting quirk, during the forest training story. Toga has defeated Tsuyu, and she is battling Ochaco to a halt. Himiko had a few things to say during that period.

Ochaco denied it, but as Himiko pointed out, these two gals aren’t all that dissimilar! They both have someone they like and aspire to be like, and their drive drives them to try to be like that person. Unlike Himiko, who aspires to be like Stain,

Ochaco is a hero who occasionally follows in the footsteps of her good friend IzukuMidoriya. Ochaco has reminded herself on several occasions.

10 Girl Who Makes a Living

Let’s continue talking about Ochaco’s family. In actuality, Ochaco has two motivations for graduating from UA and becoming a regular superhero. The first wants to save people and become a symbol of hope, while the second provides for her family. Heroes are compensating for their efforts, and Ochaco anticipates receiving his.

But not to buy a flashy automobile with! She intends to give her money to her family and help them because she is a humble and kind young lady. Her mother and father are not about to embark on their heroic careers, so Ochaco took it upon herself to do so.